Pitkin County is named for Frederick Walker Pitkin, who was the second Governor of the State of Colorado. 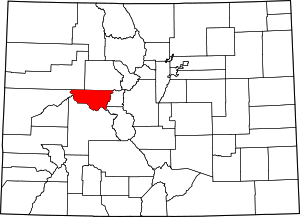 Description: The building faces south and is a two story red colored brick and stone structure. The building is located on landscaped grounds in the center of Aspen. The building has a raised stone foundation. The center section projects from the main building and has an arched recessed entrance on the first story. Above is the Statue of Justice. Bricks are laid in strecher bond. Stone belt cources provide sills and lintels for the narrow one-over-one double-hung sash windows on the first story. Segmental arches of vertical brick, with keystones, spring from the lintels on the flanking projections. The second-story windows are similarly treated but less restrained. All have segmental arches; the central window of the center pavilion, and the windows on the flanking ones, are combined under one larger arch with their transoms divided by the brick. Above them is a wide plain wooden frieze topped by a dentilled cornice at the roof line. On the center of the roof is a square tower with mansard roof. In the interior are hardwood floors and high ceilings. The building houses the District Court and County Court of the 9th Judicial District. The architect was William Quayle and the contractor was J D Hooper and N A Sears was the stone mason. On the north side is an extension which houses the County Jail and on the east side is the County Administration Building.

Note:  The six-foot (2 meter ) statue of Lady Justice, one of the few in the United States showing her without the usual blindfold, was made of pressed stamped ainc in Salem, Ohio, for a cost of $250 ($6,000 in contemporary dollars). The statue’s painted silvery exterior reflects the silver mining that was the root of Aspen’s prosperity at that time. Why the blindfold was omitted is not known for certain. It has been humorously suggested that the commissioners, given the corruption allegations, decided Justice should be able to keep an eye on what was going on around her. Another account has it that the miners, who had previously set up their own informal courts to resolve disputes over claims, were reluctant to cede that authority, even to a legitimate governmental body. They therefore paid for the statue themselves and insisted that she be shown without the blindfold but with scales (weight being an impartial measure of mining success), to emphasize that in Aspen justice could be impartial without artificial restraints.

History:  The county was created in 1881 and Aspen was selected as the county seat. The county rented premises. The first courthouse was a two story wood frame structure located at Mill Street and Cooper Street and was built by local tradesmen in 1882 to 1883 at a cost of $16,000. The second and present courthouse was constructed in 1890 to 1891.

Note:  During the construction of the first courthouse in 1882 to 1883, the superintenant of construction was W E Turley, one of the County Commissioners. The foreman for the carpennterwork was J D Hooper, painting was done by W C Davies, lumber supplied by Buchanan and other items supploed by the local merchants in Aspen.