Mesa County is named for the mesa formations which are widespread through the area. 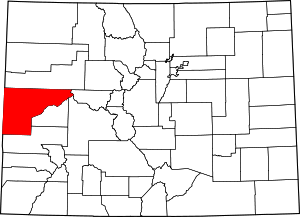 Description: The building faces south and is a two story dark buff colored brick, stone and concrete structure. The rectangular shaped building is located on landscaped grounds in the center of Grand Junction. The south front has a central entrance on the first story with doors of brass and ornate grilles. The building was constructed of brick faced with Indiana limestone. On the second story are large arched windows with double Ionic columns between. Below the roof line is a projecting cornice. There is a parapet running along the flat roof line. The interior has hallways with marble wainscoting and terrazzo floors. The court rooms are outfitted in golden oak. The former second story courtroom is now home to the Mesa County Commissioners. A three story brick addition was constructed on the north side in 1974. The architect was Robert A Van Deusen. Description: The building faces east and is a three story dark red colored brick, concrete and glass structure. The rectangular shaped building is located on landscaped grounds in the center of Grand Junction to the west of the courthouse. The east front has a central semicircular section rising two stories with entrances on the north and south and large glass panels. Along the east side are recessed windows on the first story with brick pillars. The roof line is flat. The building houses the District Court and County Court of the 21st Judicial District.

History:  The county was created 1883 and Grand Junction was selected as the county seat. The first courthouse was a two story opera house, Mandel Opera House built by Dickey and Currie in 1882 to 1883 on the southwest corner of Main Street and South 6th Street on land purchased by A G Mandel of New York. In 1884, the building was sold to the county and converted for use as a courthouse with courtroom on the second story. The building was torn down in 1934 except for the west wall and a one story building was erected… The second and present courthouse was constructed in 1922 to 1924 at a cost of $293,000. The County Justice Center was constructed in 1998 to 2000.

Note:  Over the years the first courthouse had been broken into and thieves had gotten into the Treasuree’s Office on the first story. At one point a thief had gone through the vault but did not find and money so he left a note telling the Treasurer to leave money nex time