Alamosa County is named for the cottonwood trees which grow along the Rio Grande as “alamosa” is the Spanish word for a “cottonwood grove”. 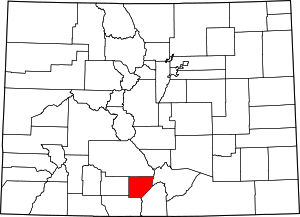 Description: The building faces north and is a two story red colored brick structure. The building is in the form of a “U” with the south wing joining the east and west wings. There is a courtyard in the center. Along the courtyard are enclosed walkways with arches facing the courtyard. The red colored title roof is hipped. The building is a Works Project Administration project using local labour. Taves & Son did the electrical work. In the southwest corner is the old jail which is a rectangular two story building. The buildings were renovated from 1978 to 1981. On the west side is the County Office Building.

Note:  During construction, the bricks were produced at a rebuilt kiln north of the city. Geoege Hettler, who was the foreman for the kiln, died in January 1937. The County contributed $31,149 and the PWA contributed $39,713 towards the cost of construction.

Description:  The building faces north and is a two and three story metal and concrete structure. The building is located on landscaped grounds to the south of the center of Alamosa. The building is metal using structural steel with a standing seam roof system. The center section rises to three stories with the front having a canopy at the first story and a large window on the second story. In the interior are courtrooms, hearing rooms and multipurpose room. The building houses the District Court and County Court of the 12th Judicial District. Description: The building faces east and is a one story red colored brick and concrete structure. The building is located on landscaped grounds in the center of Alamosa on the west side of the courthouse. The east front has a glass paneled entrance. The roof line is flat.

History:  The county was created in 1913 and Alamosa was selected as the county seat. The county rented space one block east from the present site from District Judge C C Holbrook for a period of three years in the amount of $1,600 per year. In 1914, District Judge C C Holbrook submitted three proposals to the County Commissioners for space rental one of which would include “two rooms on Lots 6 and 7, Block 39 on Fourth Street. Changes and improvements would be at the expense of Mr. Holbrook, however, the expense would be taken out of the rent for $1,700 per year. The first courthouse was constructed in 1936 to 1938 at a cost of $70,860. The County Justice Center was constructed in 2018 to 2019.