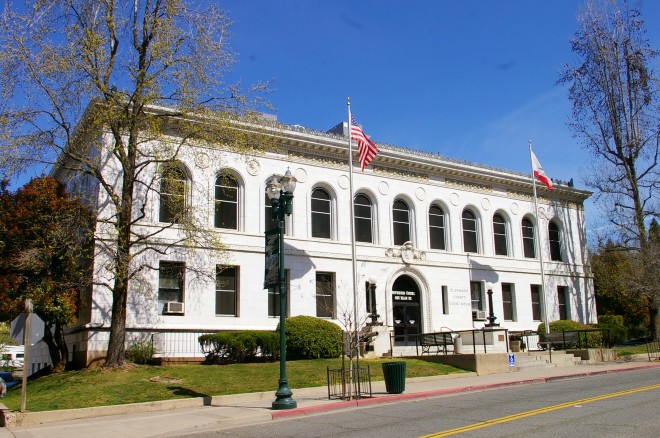 El Dorado County is named for the mythical “El Dorado, The Gilded One” which was the California Gold Rush.

Description:  The building faces south and is a two story stone and concrete structure.  The rectangular shaped building is located on landscaped grounds in the center of Placerville. The south front has a central arched entrance. The second story windows are arched. The eave extends from the building with a horizontal band of ornamentation below. The roof is hipped. In the interior are four courtrooms. The building houses the County Superior Court. The building was restored in 1970 to 1971. The architect was Robert Mason and the contractor was Buetner-Carter and Dent & Associates.

Note:  Clarence Cecil Cuff modeled the building after the Boston Library but on a smaller scale. The contract with Ransome Concrete Company is displayed in the entrance lobby. 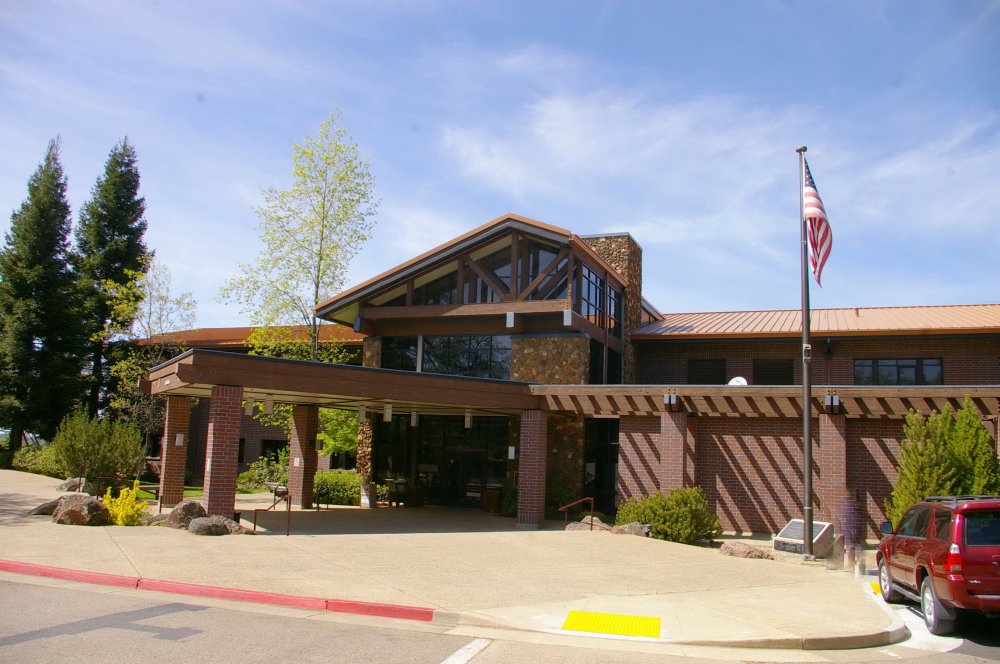 Description:  The building faces east and is a three story red colored brick and concrete structure. The building is located on the landscaped grounds of the El Dorado County Government Center to the west of the center of Placerville. The east front has an extended porch supported by pillars. There is a recessed entrance with glass panels above and a sloped roof. The building descends down a slope on the west side. The roof is sloped. The building named as Building C houses the County Superior Court – Criminal .

History:  The county was created in 1850 and Coloma was selected as the county seat. There was a log jail on High Street and Back Street. The second jail was erected in 1855 and a stone block prison was erected in 1857 and used until 1862. The ruins remain. The county seat was moved to Placerville ( Hangtown ) in 1857 and the first courthouse was a two story wood structure erected in 1861. The courthouse burned in 1910. The second and present courthouse was constructed in 1912 to 1913. The Superior Court Building was constructed in 1991 to 1992. 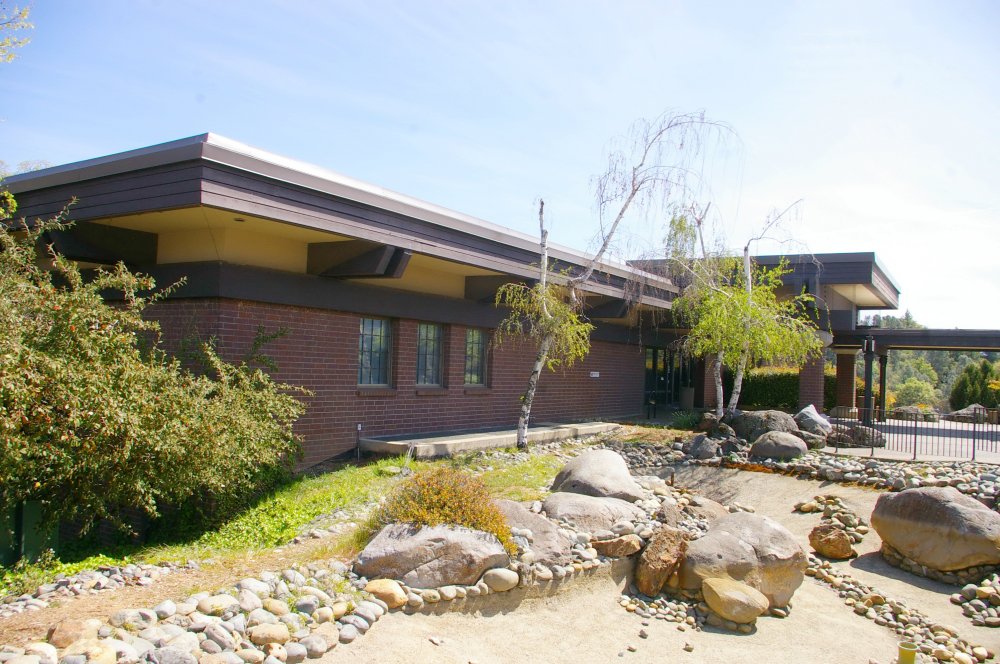 Description:  The building faces south and is a two stone story red colored brick, concrete and glass structure. The building is located on the landscaped grounds of the El Dorado County Government Center to the west of the center of Placerville. The building faces south and was completed in 1976. The south front has a large covered porch connecting to Building A on the south side. The flat roof line extends from the building. The main entrance is on the second story. The building descend north down the slope. There is a large center atrium with plants. The building is named the Administration Center. Building A on the south side was built in 1991 to 1992 and is named the Community Development Building and is connected to Building B on the north side by a long porch. The architect was Ehrlich-Rominger Architects and the contractor was Mark Diversfield, Inc. 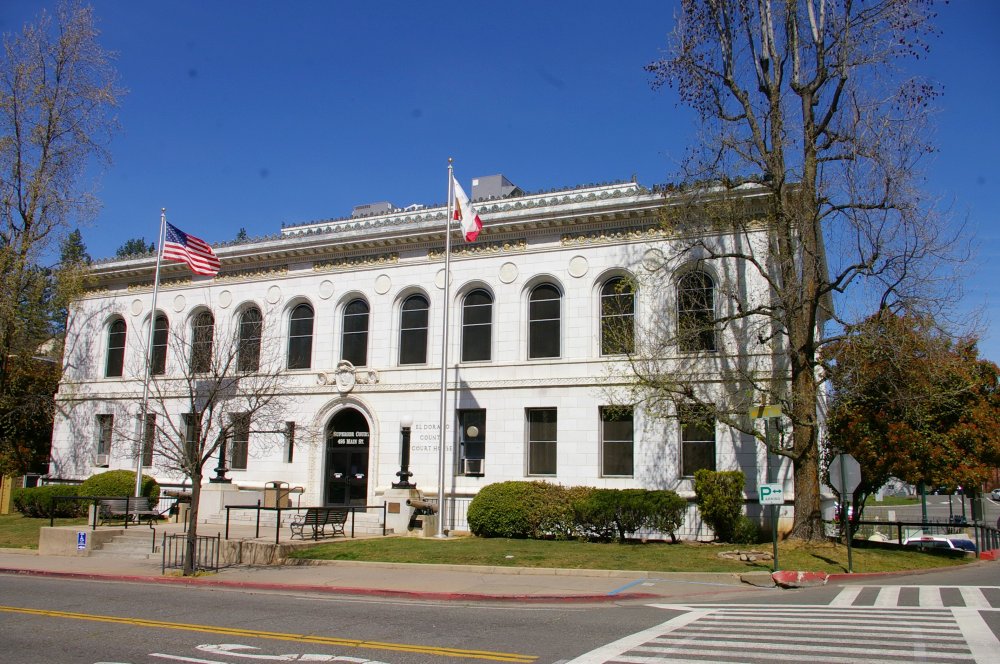 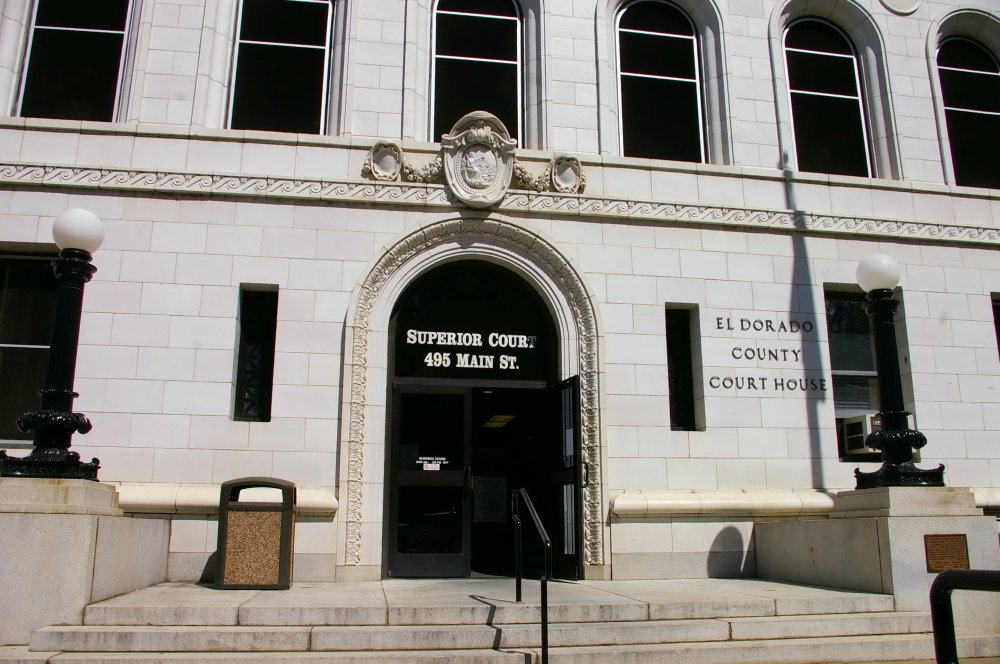 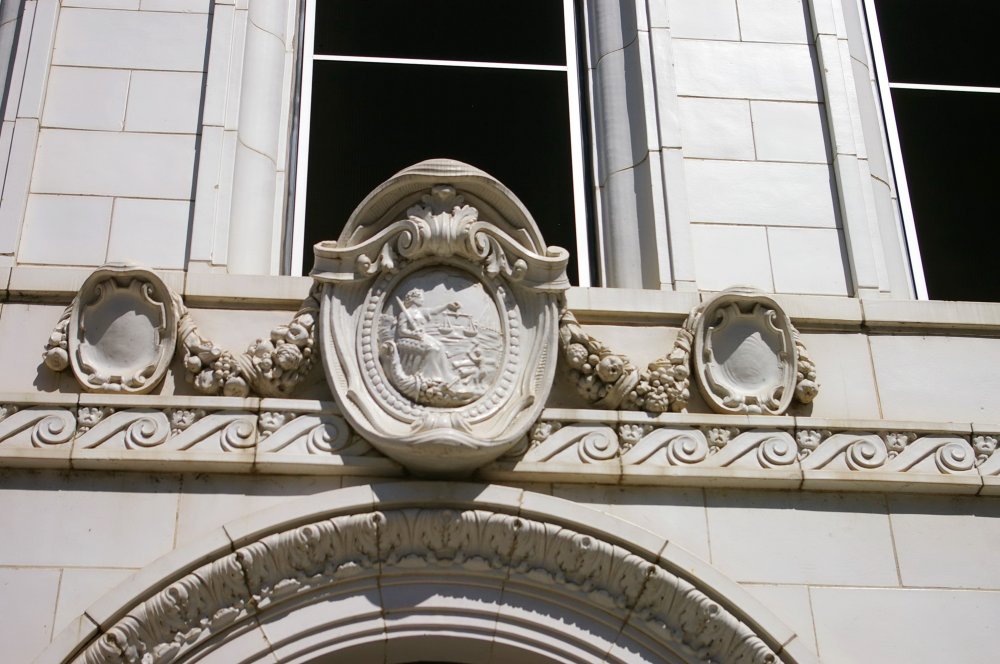 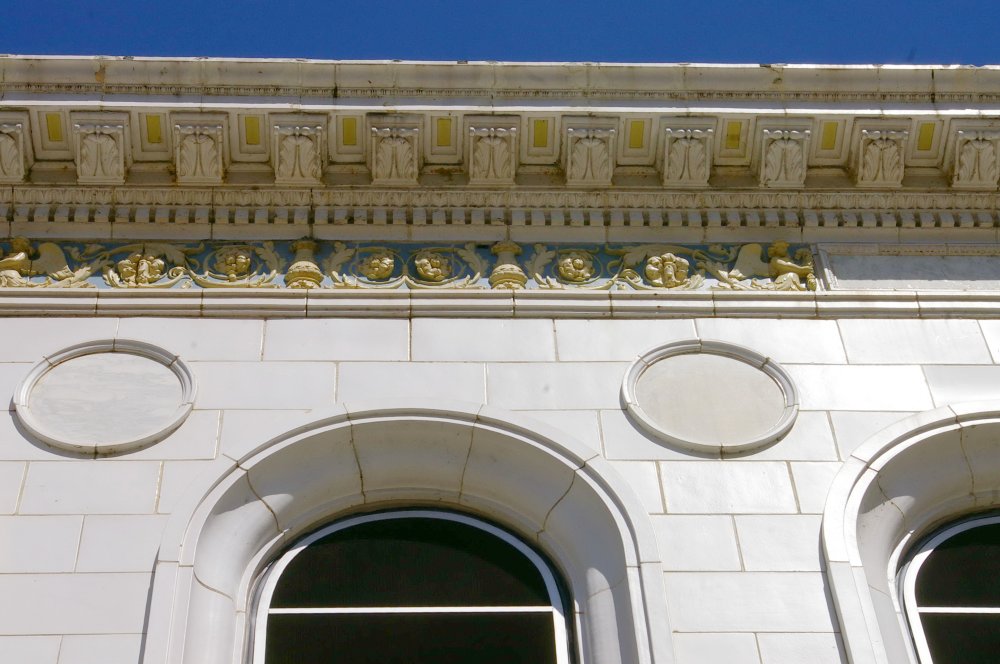 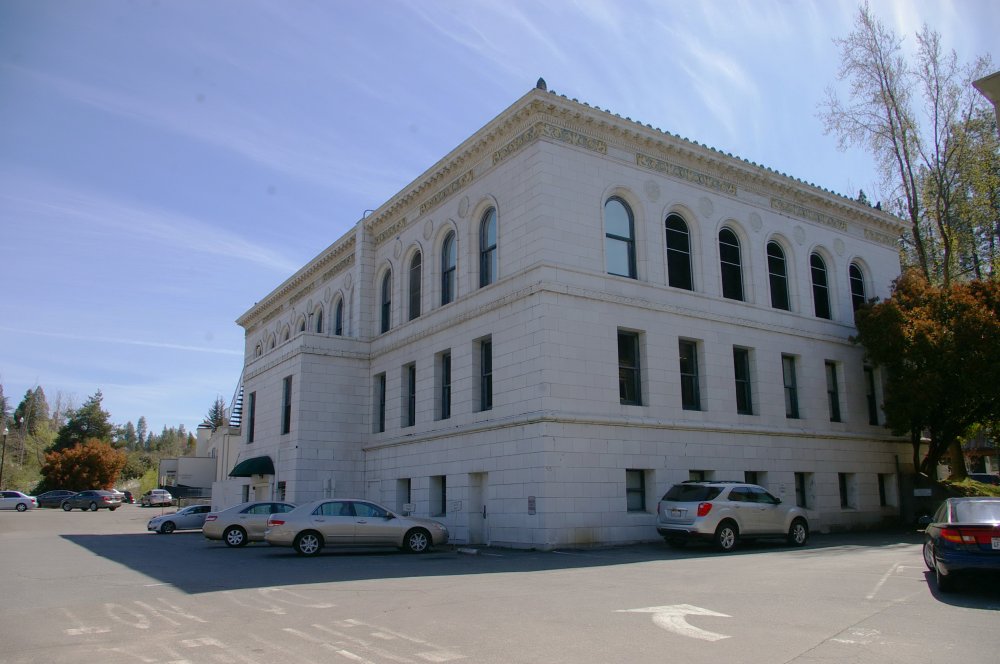 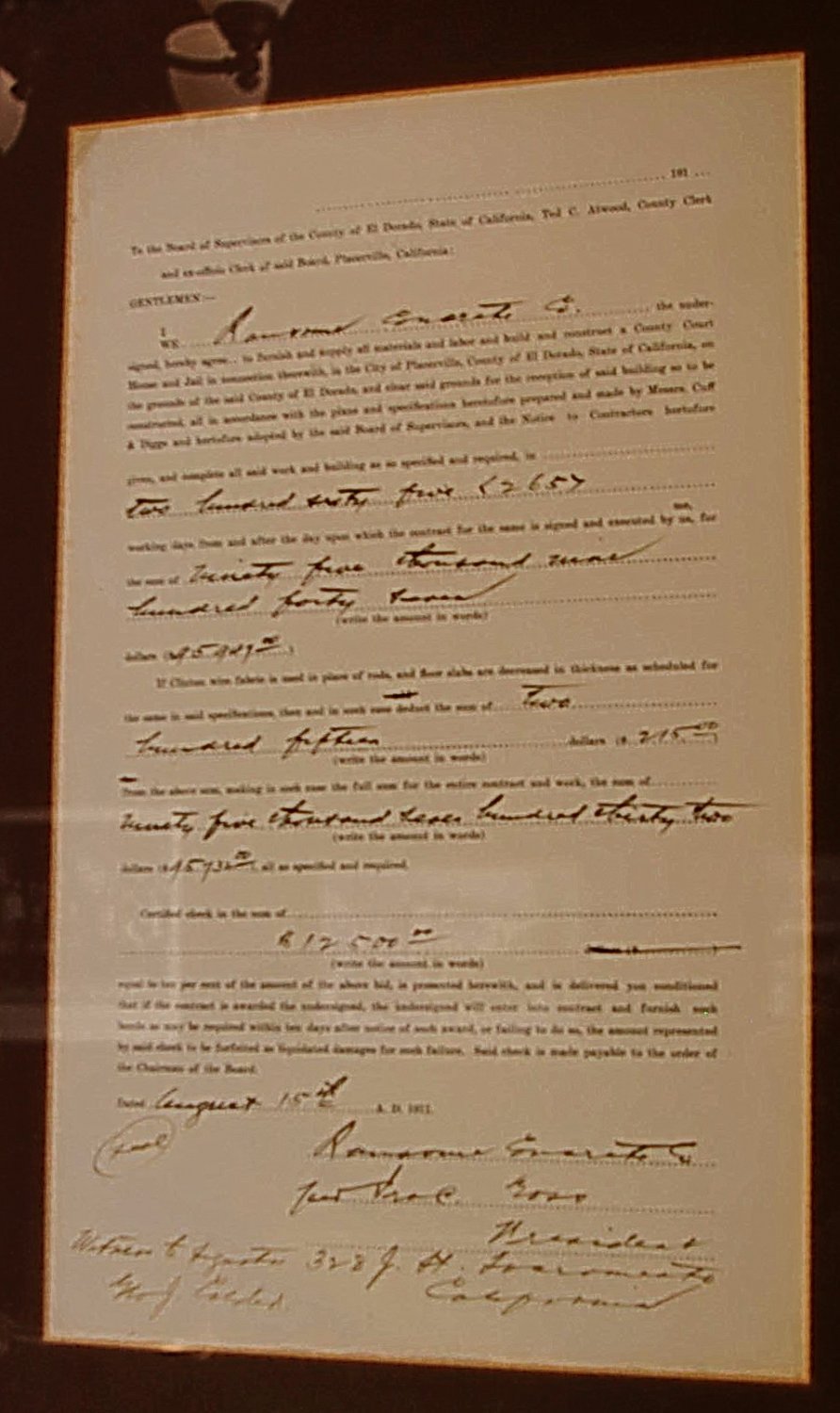 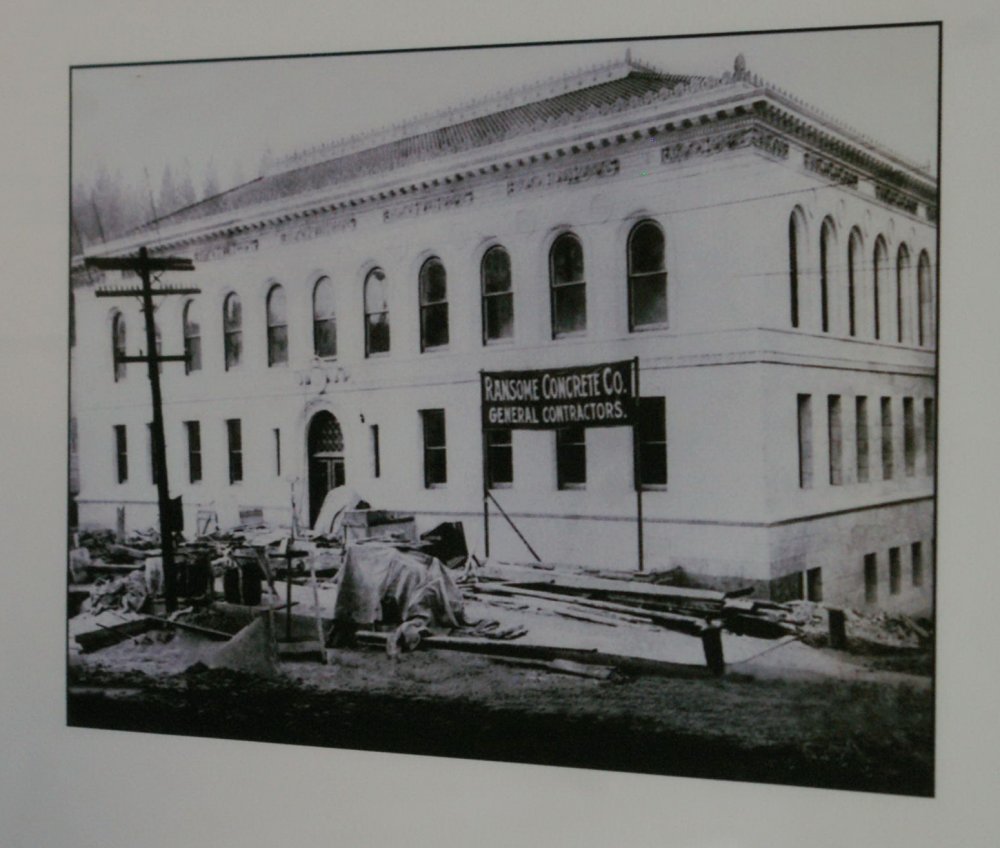 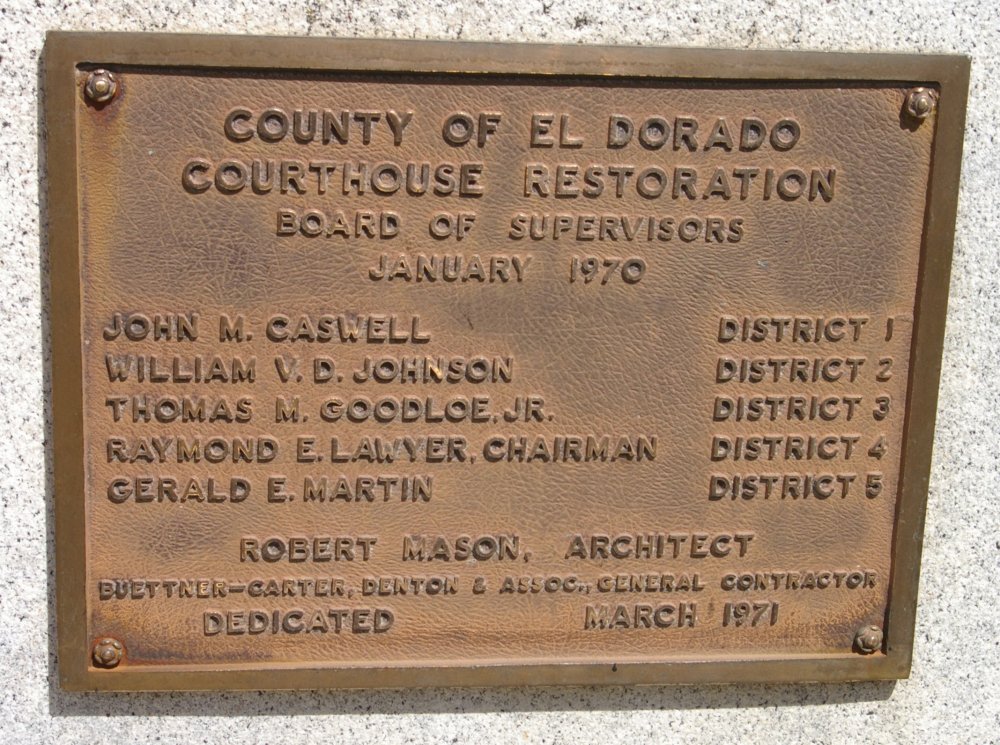 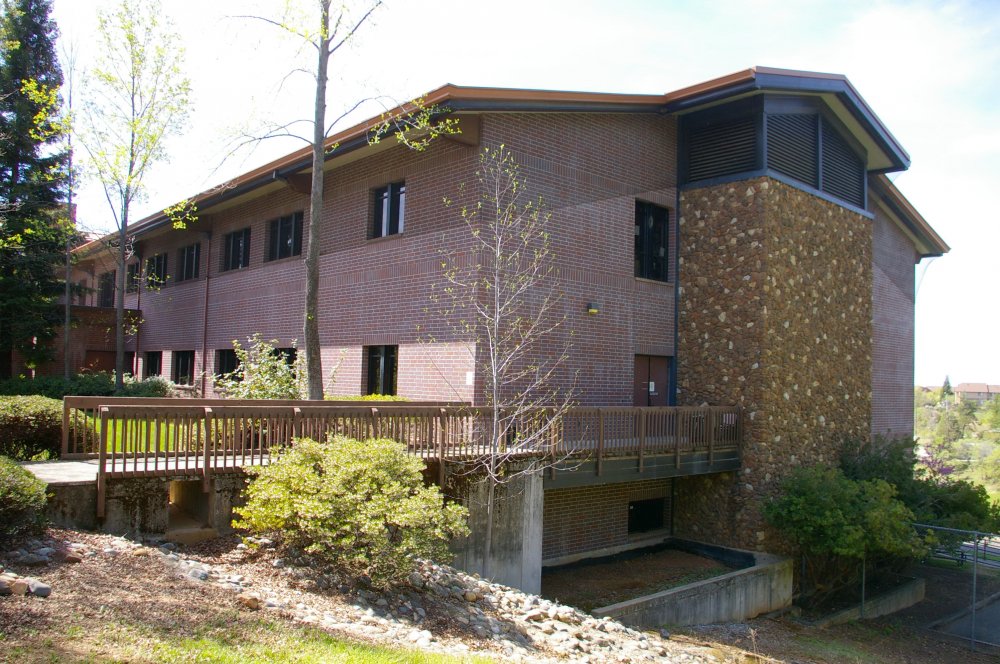 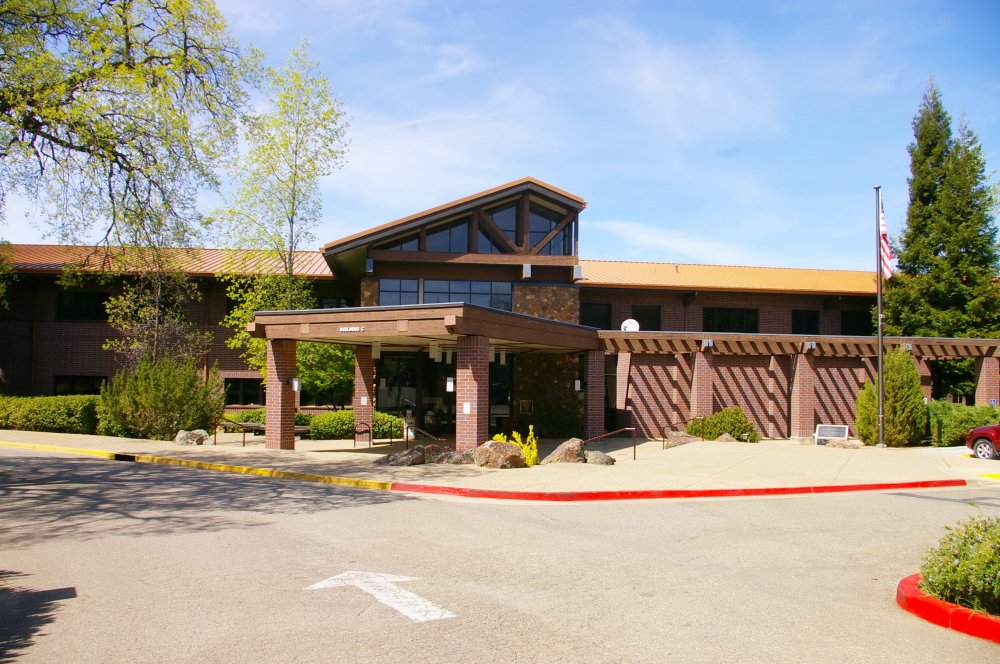 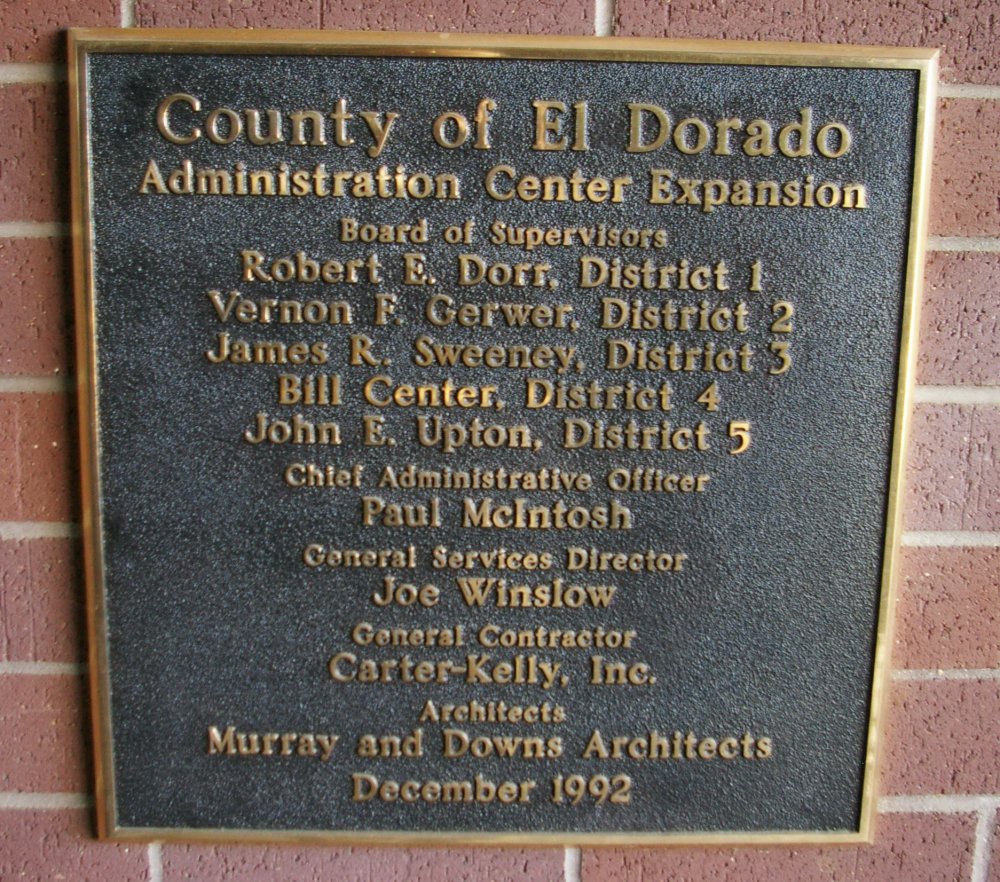 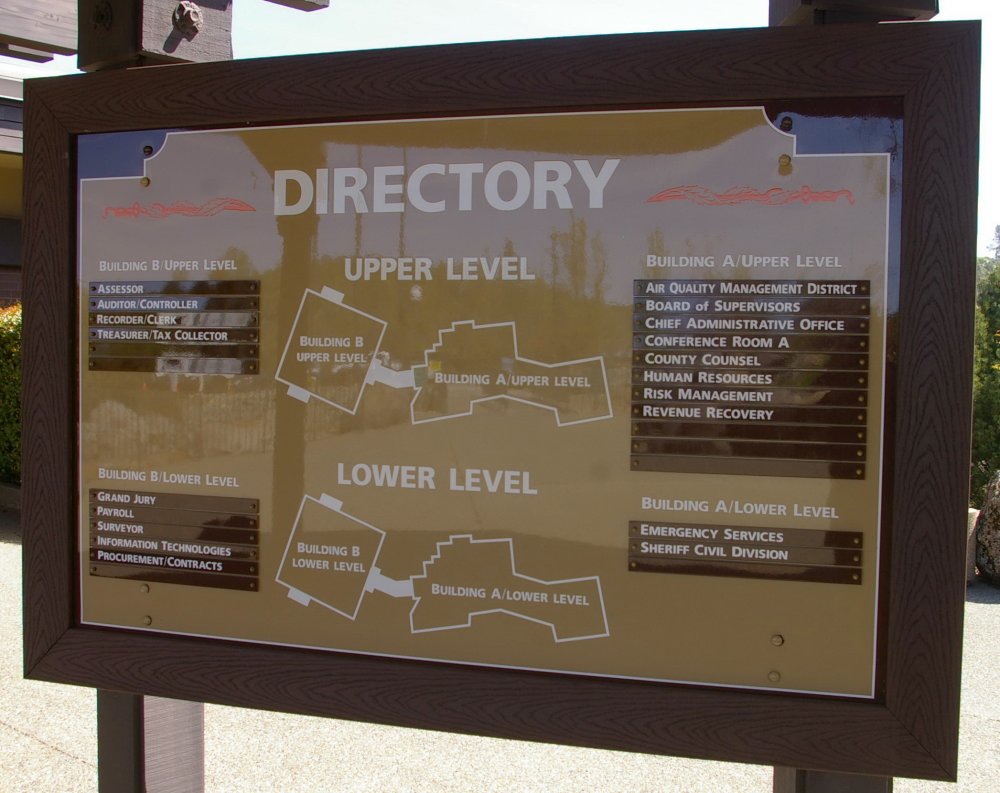 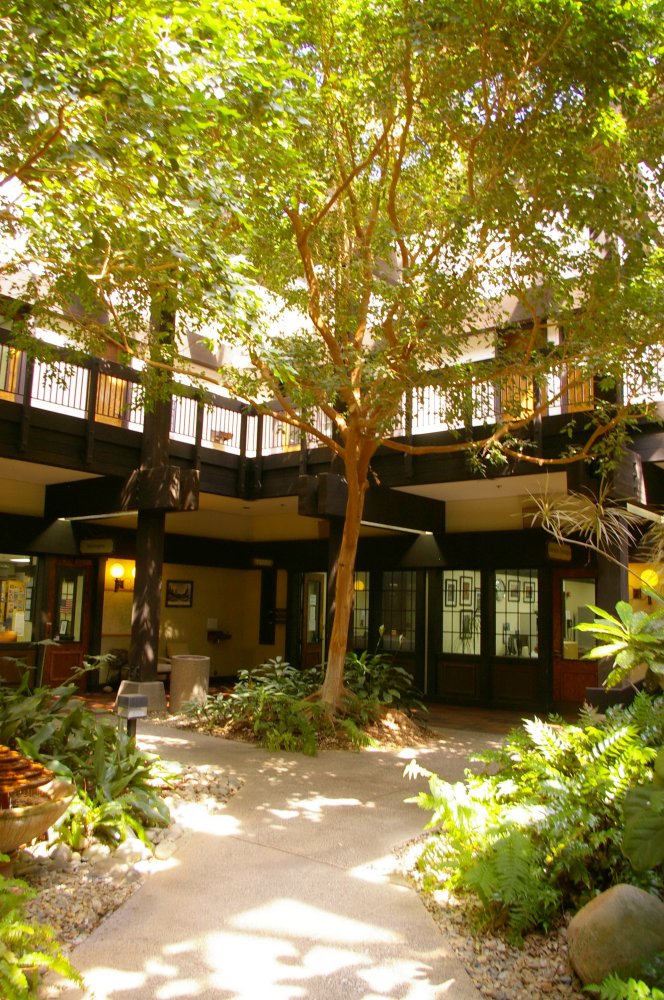 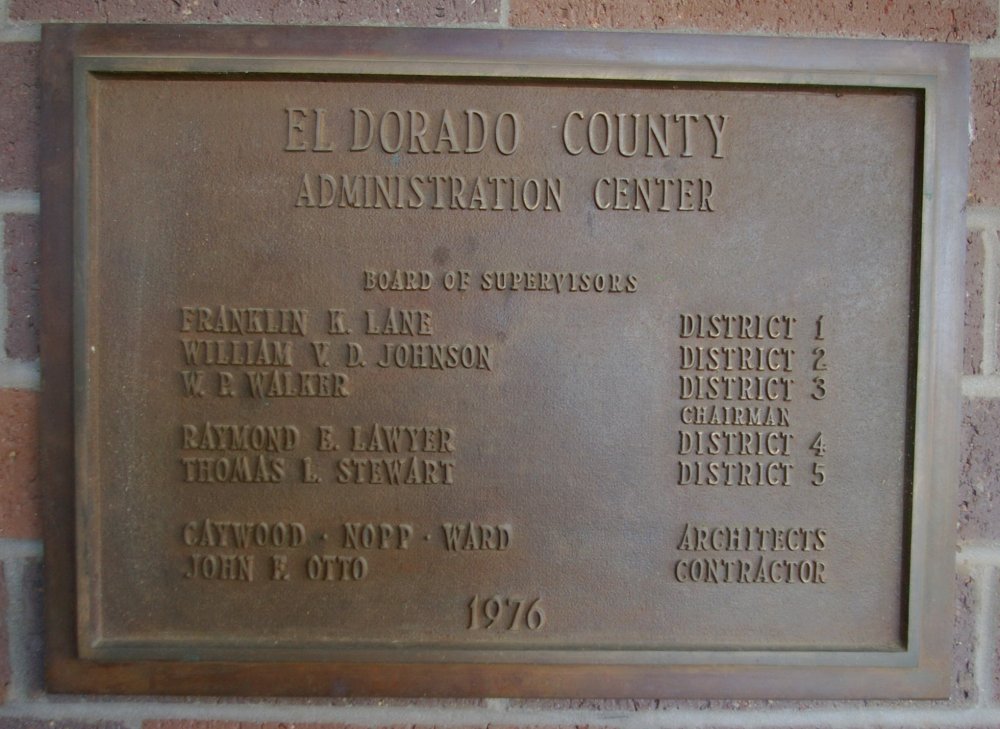 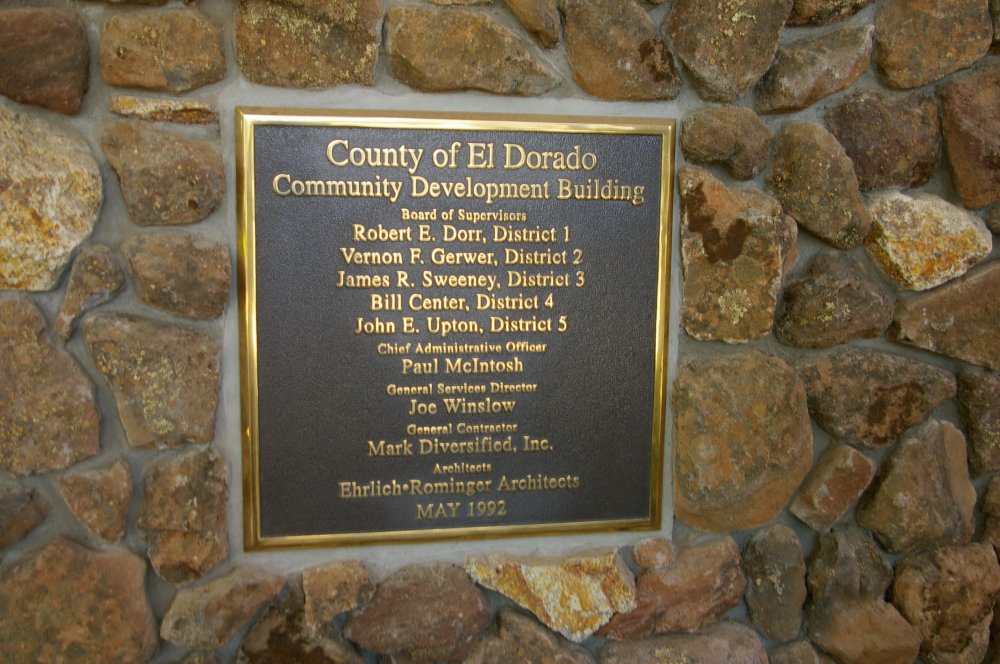