Alameda County is named for the Spanish word for “avenue shaded by tress” or “cottonwood grove”. 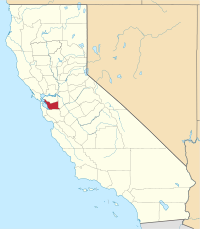 Description:  The building faces south and is an eleven story steel frame and reinforced concrete and granite structure. The building which has a California granite base and granite exterior, is located on landscaped grounds on the edge of Lake Merritt. The base of the square shaped building is three stories with vertical windows. In the center is a large square eight story tower with vertical windows and small square windows at the top. There is a cupola at the top of the building. The interior has a spacious lobby flanked by fifteen foot high marble mosaic murals depicting the county history and created by artist Marian Simpson of Berkley and sculptor Gaetano Duccini of San Francisco.The building is named as the Rene C Davidson Courthouse.

Note:  The third courthouse is still standing and located at 1952 20 th Avenue and International; Boulevard in Oakland. Description:  The building faces north and is a six story concrete and glass structure. The rectangular building has horizontal windows and the north front is concave along the center section. The roof line is flat. The building is named as the Wiley W Manuel Courthouse and houses the Superior Court.. Description:  The building faces west and is a six story concrete structure. The building is named as the Allen E Broussard Justice Center and houses the Superior Court.

See:  The county is located in the 1st Appellate District of the Court of Appeal – San Francisco.