Pinal County is named for the Pinal Mountains and for the Pinal Native American people who lived in the area, and “pinal” is the Spanish for “pines”. 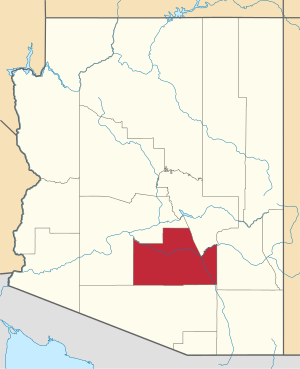 Description:  The building faces north and is a four story buff colored concrete and steel structure. The building is located on landscaped grounds to the north of the center of Florence. The north front has a central glass entrance with concrete pillars supporting an extended portico above the second story. The windows are horizontal and narrow with square windows on the third story. The roof line is flat. In 2016 to 2017 a four story addition was constructed with six courtrooms. The architect was DLR Group of Minneapolis, Minnesota and the contractor was Danson Construction of Pheonix. Contractor:  A J Doran and T A  Adams

Description:  The building faces west and is a two story red colored brick structure. The building is located on landscaped grounds in the center of Florence to the southwest of the courthouse. The building has metal columns, lintels and cornices. The west front has a central entrance frames with white colored trim and with a small balcony above on the second story. On the roof is a white colored peaked dormer. White colored trim is located above the windows. White colored cornices run along the roof line. On the center of the roof is a large cupola with clock and red colored roof. A shortage of funds resulted in painted metal clock faces which show the time at 11:44. The rounded section on the east side was the jail and the courtroom was on the second story.  The building was renovated in 1915 to 1917 making the building a “T” shape. The architect was Lesalter & Kibby of Phoenix and the contractor was Snelling & Boring. Additions were constructed in 1933, 1975 and 1983. The building was restored in 2012. The architect was Swan Architects Inc. contractor was Concord General Contracting of Mesa. The building now houses county offices and is part of the County Administration Complex. Description:  The building faces  south and is a one story adobe brick and wood structure. The south and east sides have a long porch supported by pillars. The roof is hipped.  The building served as courthouse until 1891. Since then, the building has functioned as a hospital, health center, home for the elderly and a museum. It is now the McFarland Historical State Park.

Description:  The building faces south and is a one story tan colored brick and concrete structure. The building is located on landscaped grounds in the center of Florence on the east side of the second courthouse. The roof line is flat.  The building is designated as Building E of the courthouse complex. Third County Courthouse is on the right side of photo