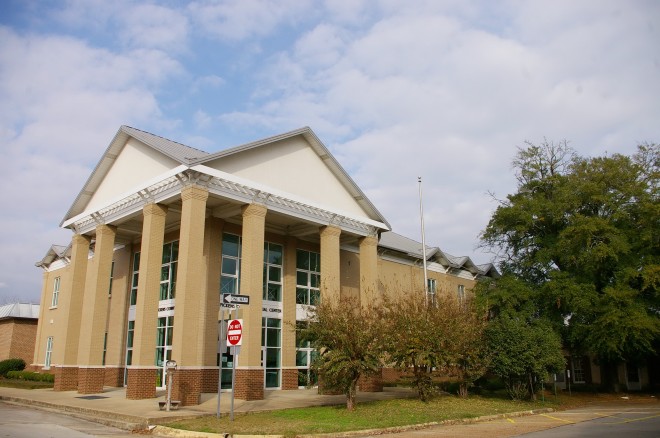 Pickens County is named for Andrew Pickens, who was a General during the American Revolutionary War. 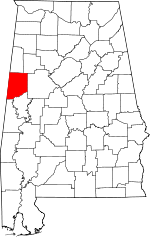 Description:  The building faces southwest and is a two story buff colored brick, glass and concrete structure. The building is located on landscaped grounds of Courthouse Square in the center of Carrollton. The southwest corner has a large porch with seven high pillars supporting a pitched roof. The recessed entrance and walls are glass. The building houses the County Circuit Court and the County District Court of the 24th Judicial District. 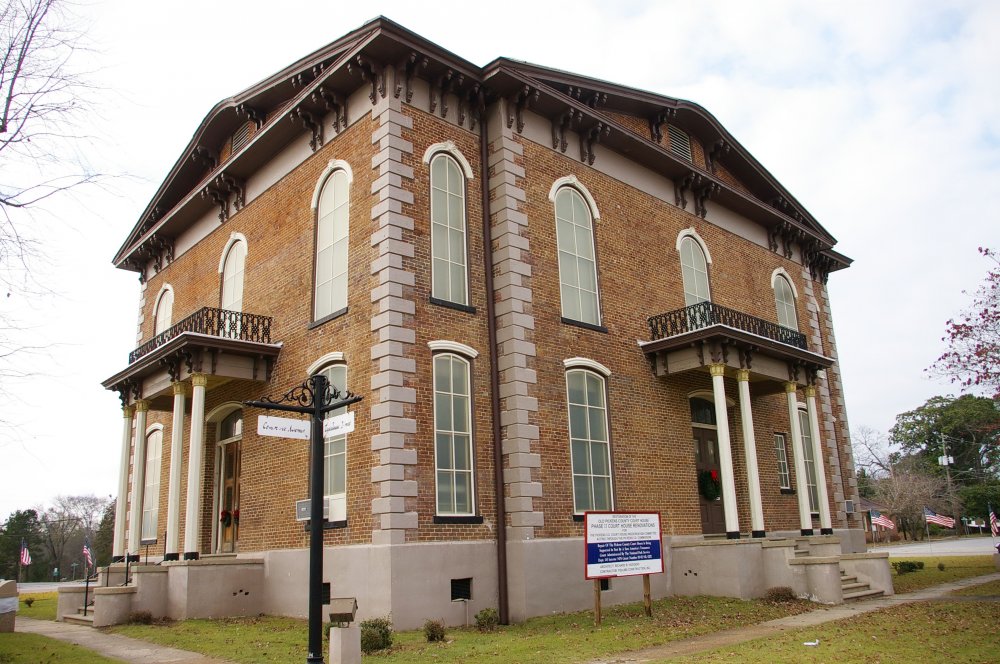 Description:  The building faces east and is a two story buff-brown colored brick and stone structure. The building is located on the landscaped grounds of Courthouse Square in the center of Carrollton. Each side has a small one story portico supported by four thin columns. The windows are arched and trimmed with stone. Each corner is trimmed with stone. The building was renovated in 2010 and 2011. The architect was Richard B Hudgens and the contractor was Psalms Construction Inc.

Note:  A historical sign near the courthouse tells the story of the image in the window.

Yet, less than twelve years after Union troops had set fire to their first courthouse, the new one burned to a pile of smoldering ruin, apparently the result of a burglary gone wrong. Even as work began on a third courthouse, the townspeople demanded vengeance for the horrible act. Their vengeful eyes finally settled on Henry Wells, a freed slave who lived near the town. Henry Wells was no angel. He was said to have a horrible temper, and there was no denying he had been involved in several brawls. Rumors went even further; people said he constantly carried a straight razor, and was not afraid to use it. Despite the rumors, however, there was only vague circumstantial evidence against him in the burning of the courthouse.

But it was Alabama in 1878, and Henry Wells was a black man accused of burning down a symbol of town pride. He was charged and arrested on four counts: arson, burglary, carrying a concealed weapon and assault with intent to murder. Ironically, he was taken to the sheriff’s office, located inside the newly completed courthouse, to await trial. As word spread through the town of Wells’ arrest, the sheriff could sense trouble brewing. The mood of the town seemed as ominous as the dark clouds gathering in the late afternoon sky. As the first few drunken men began heading toward the courthouse, the sheriff took Wells to the high garret of the new courthouse, and told him to keep quiet. But as the angry mob gathered below, Wells’ fear got the best of him. He went to the window, and looked down on the crowd. He yelled defiantly, at the top of his lungs, “I am innocent. If you kill me, I am going to haunt you for the rest of your lives!” Just then, a bolt of lightning struck nearby, flashing the image of Wells’ face, contorted with fear, to the crowd below.

The lynch mob forced its way into the courthouse, and took their victim outside, even as he continued to proclaim his innocence. His cries went in vain, as the mob meted out its drunken vengeance, and dispersed. None of them even considered Wells’ predictions of hauntings as they passed out in a drunken stupor. At least not until the next morning, that is. Early the next morning, as a member of the lynch mob passed by the courthouse, he happened to glance up at the garret window. He was shocked to see Wells’ face looking down at him, just as it had the night before, when it had been illuminated by the flash of lightning. He rubbed his eyes and cursed his hangover, but when he looked back up, there was Wells. He screamed, and as others arrived, they all remembered Wells prediction. “If you kill me, I am going to haunt you for the rest of your lives!”

The face remains in the courthouse window to this very day. No amount of washing has been able to remove it, and on at least one occasion, it is said that every window pane in the courthouse was broken by a severe hailstorm; every pane, that is, except for the pane from which Wells continues to look down accusingly on the town that put him to death.

Another local version of this story is that while Wells was awaiting trial for being falsely accused of raping a white woman, a lightning storm brewed, and an angry mob gathered below to lynch him, and he told them, ” If you lynch me, you will forever see my face.” At this time lightning struck the very window in which he was standing. From that day forward, no amount of washing, or replacing that window, has been able to remove his face. 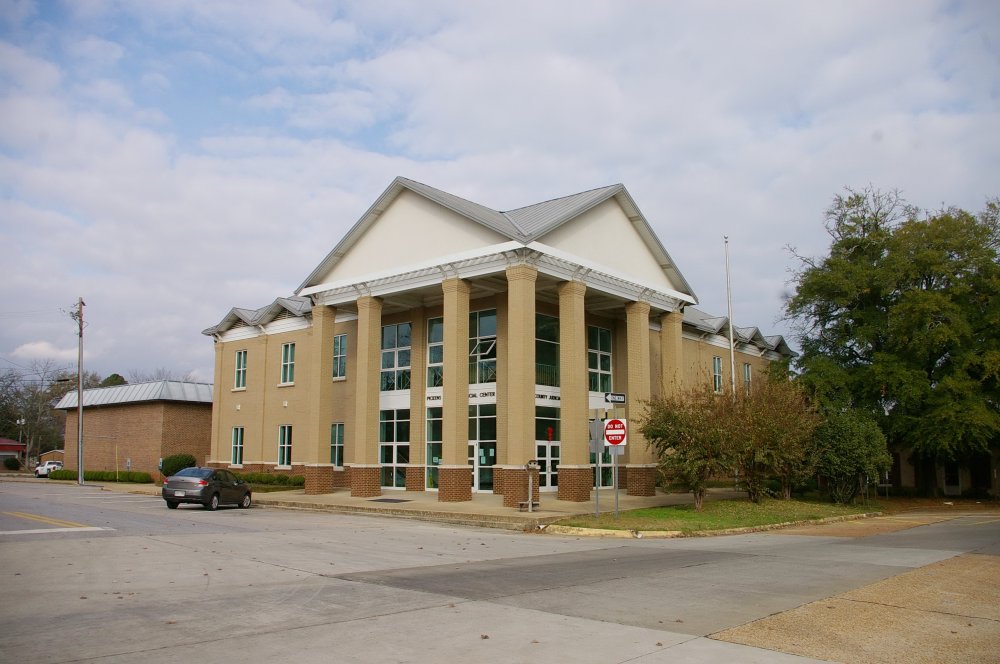 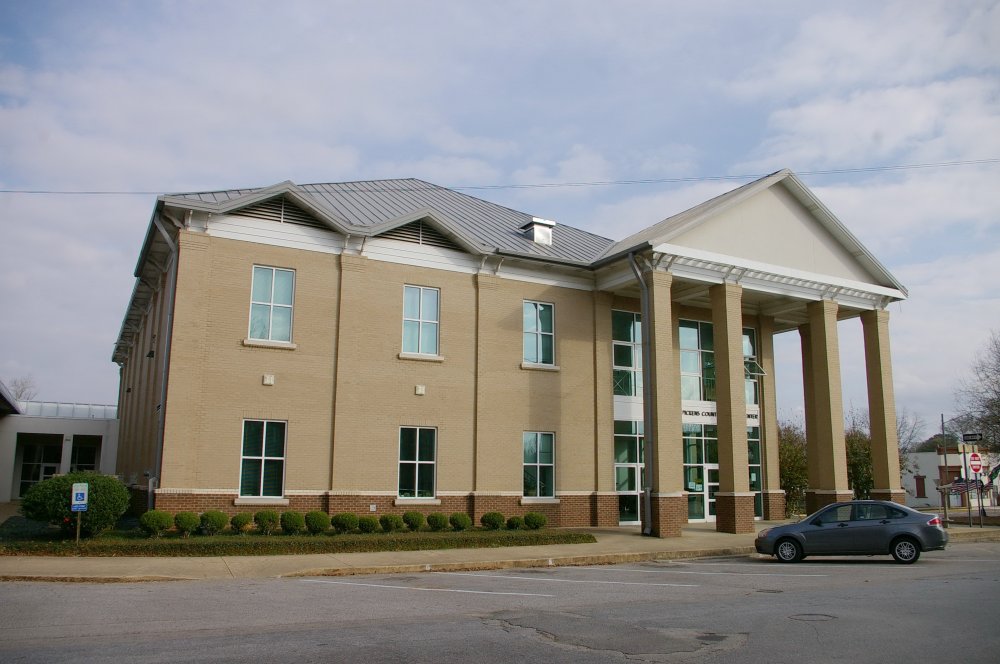 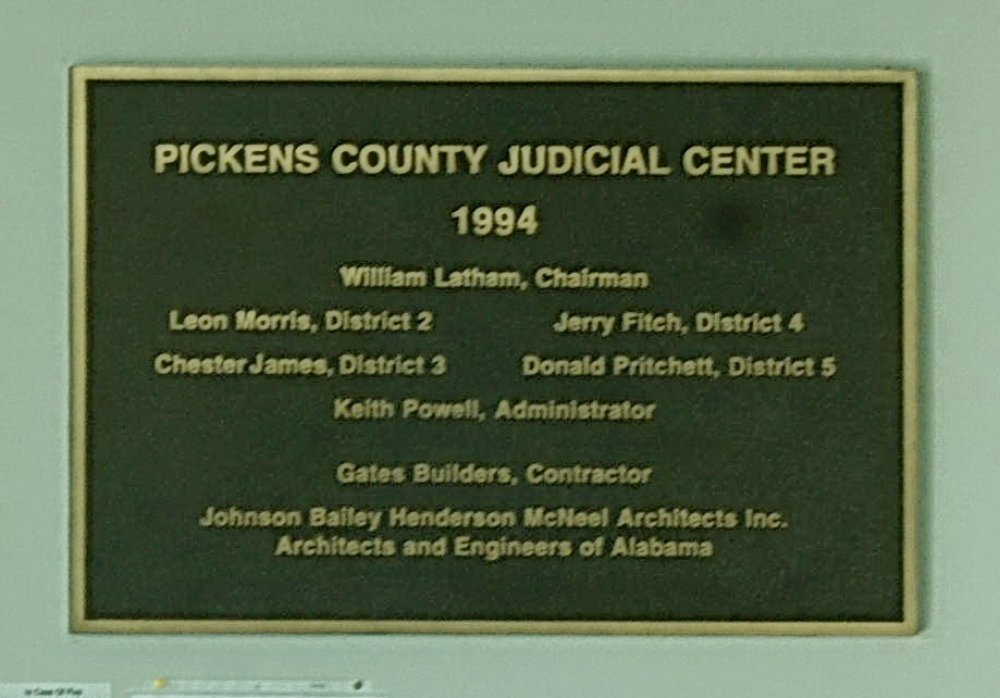 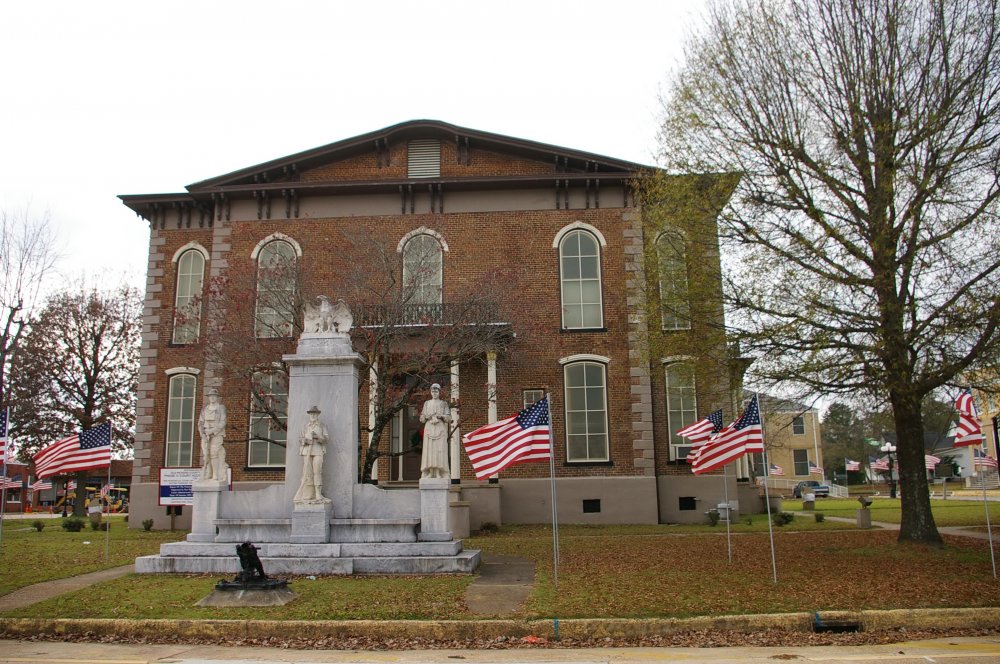 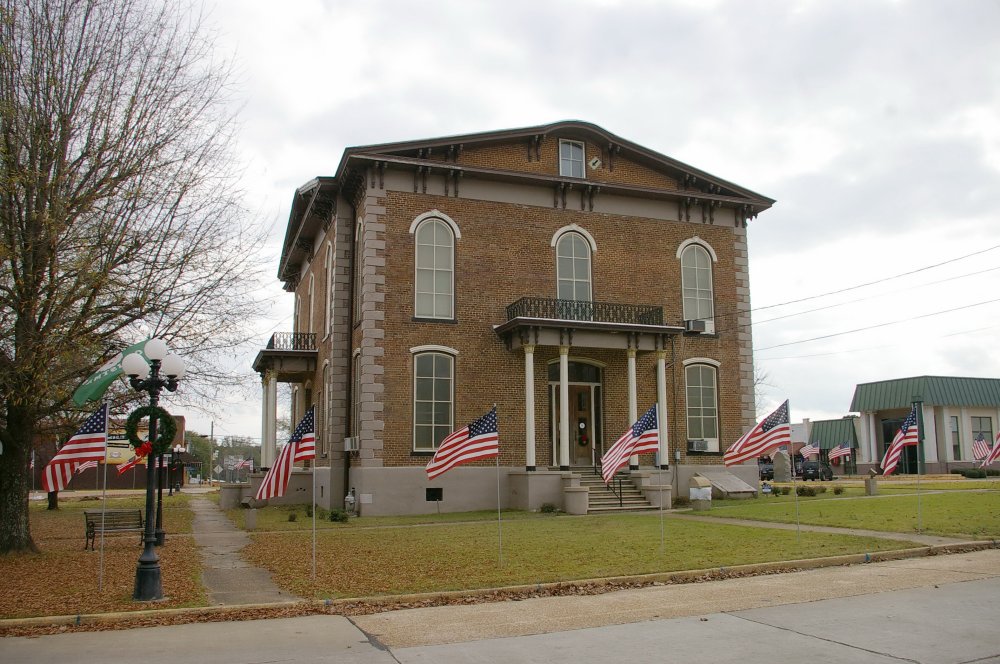 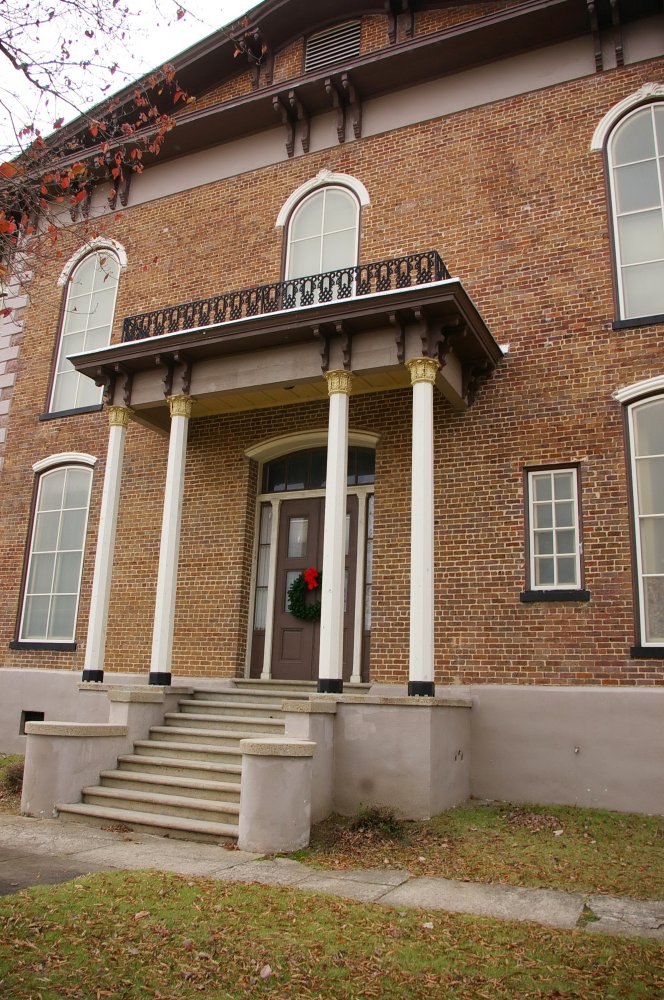 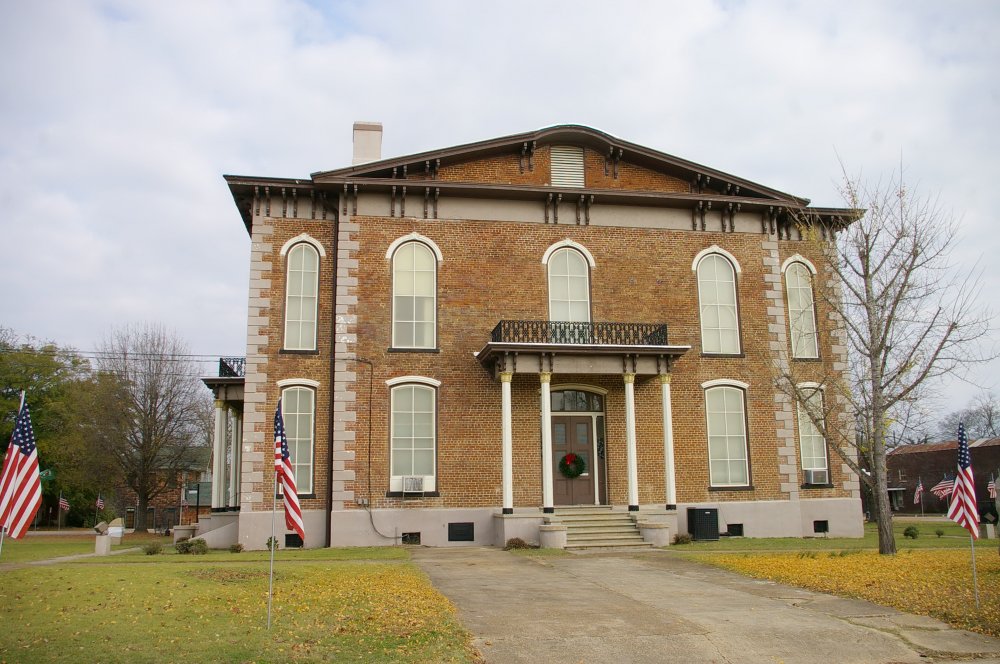 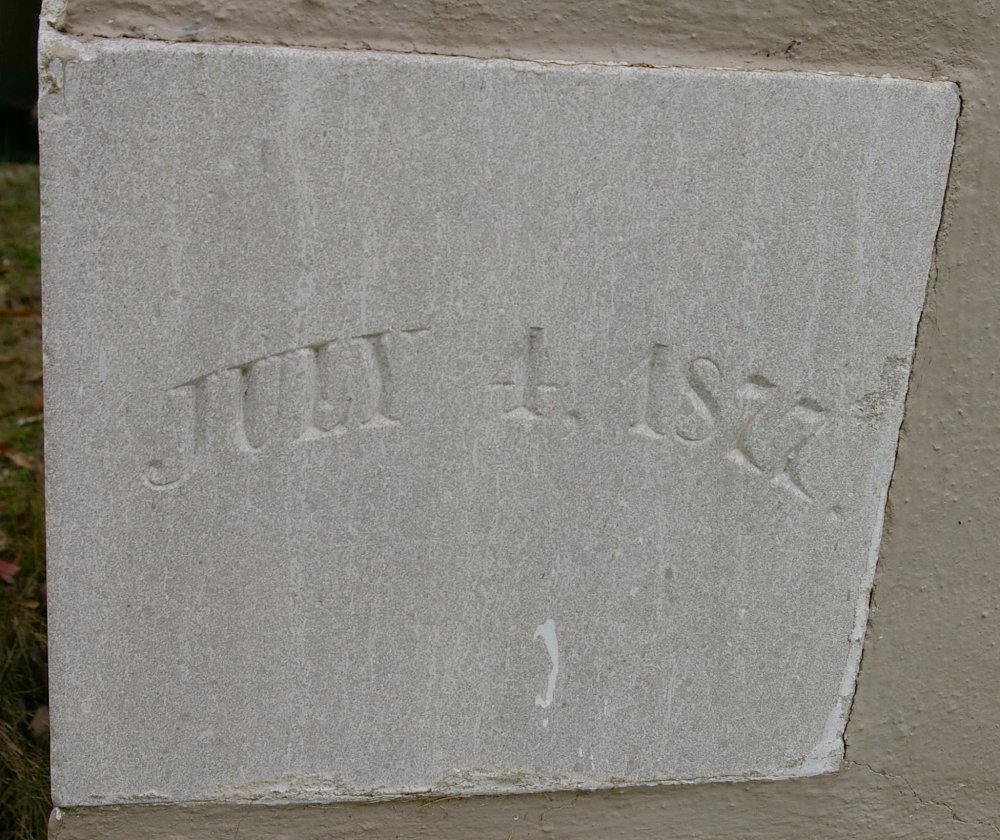 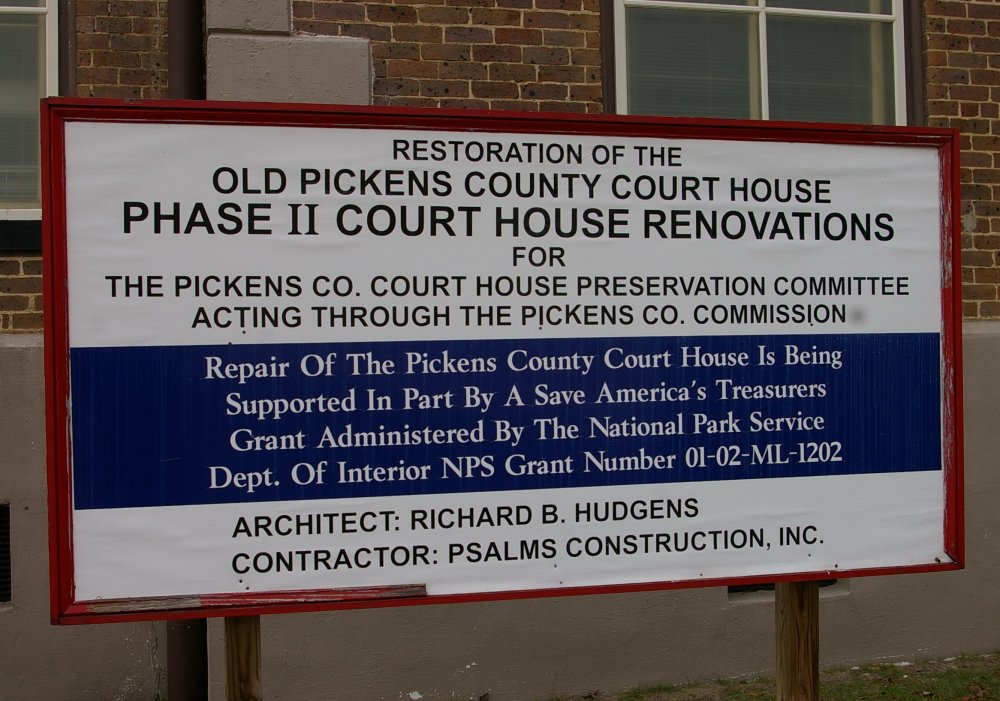 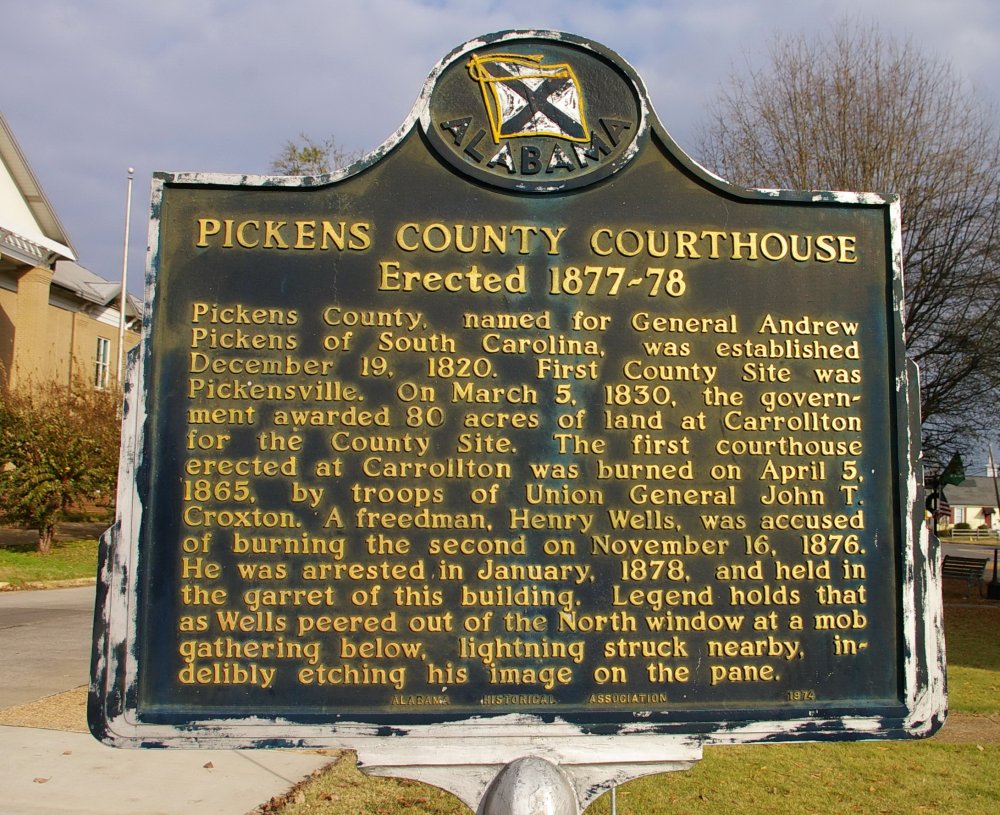