Barbour County is named for James Barbour, who was a Governor of the State of Virginia. 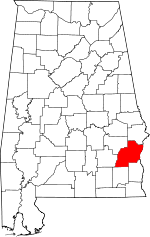 Description:  The building faces east and is a three story buff colored brick, glass and concrete structure. The building is located on landscaped grounds in the center of Clayton. On the east front is a projecting enclosed porch with dark glass walls. Above the porch are three windows. Behind is a gray colored stone facade with buff colored  brick covering the rest of the building. The roof line is flat. The building houses the County Circuit Court and the County District Court of the 3rd Judicial District. Description:  The building  faces north and is a two story red colored brick structure. The building is located in the center of Eufaula. The center section on the north has a porch with four high brick pillars and four columns along the recessed wall. Along the roof are dormers. The roof is sloped. The building houses the County Circuit Court and the County District Court of the 3rd Judicial District. The building was renovated in 1986. The architect was Blondheim & Mixon, Inc. and the contractor was Anderson Construction Company of Fort Gaines, Georgia.

Note:  The City of Eufaula contributed $15,000 toward construction costs, and the Board of Revenue awarded a building contract of $34,958.52 to Shields-Guice Lumber Company of Dawson, Georgia. A heating-system contract was let to Walter Denison of Columbus, Georgia.