Terrell County is named for Alexander Watkins Terrell, who was an attorney, judge, state legislator, diplomat and Confederate cavalry officer. 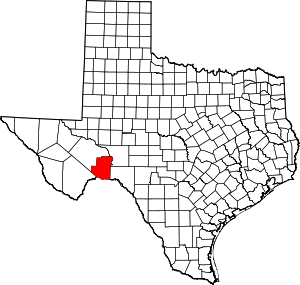 Description:  The building faces south and is a two story cream colored stucco and concrete structure. The building is located on spacious grounds in the center of the city. The south front has a central entrance on the first story with hooded canopy. On the corners are towers rising above the roof line. The hipped roof has red colored tiles. The large District Court courtroom is located on the east side of the second story and the County Court courtroom is located on the south side of the second story.. The building was remodeled in 1930 and enlarged on the north side. The architect was Henry T Phelps of San Antonio and the contractor was C M Breeding. The building was remodeled in 1983. The architect was Huckabee and Donham of Andrews.

Note:  In 1906, temporary court facilities were rented from W C Williams until the first and only courthouse was constructed at a cost of $21,500. Pauley Jail Company was paid $7,966 for the construction of a jail in 1906.