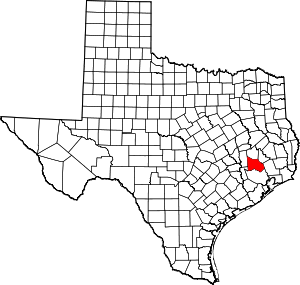 Description:  The building faces east and is a three story limestone, buff colored brick and concrete structure. The building is located on landscaped grounds in the center of Conroe. At the center is a tiered limestone building which is surrounded by buff colored wings on the north and south sides. On the east and west sides are one story porticoes supported by pillars. The roof line is flat. The building was enlarged in 1965 and 1966 with the addition of the north and south wings. The architect was John Conley and the contractor was Martin S Senands, Inc.. A further addition and alterations were completed in 1980. The architect was Page Southland Page of Houston and the contractor was S & S Contracting Company of Houston. Description:  The building faces east and is a two story red colored brick and concrete structure. The building is rectangular and located on the west side of the courthouse in the center of Conroe. The west front has a central entrance with projecting red colored brick section with recessed glass wall and rising to a peak above the roof line. The roof line is flat. The building is named as the James H Keeshan Building and houses the family court and county offices.