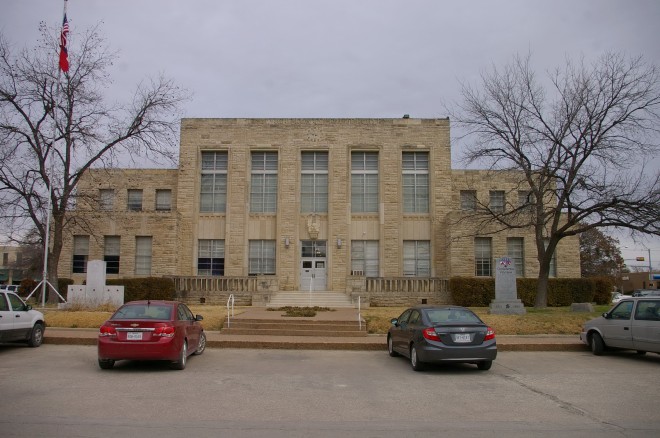 Comanche County is named for the Comanche Indian tribe that inhabited the region and derives from the Spanish “Camino Ancho” meaning “broad trail”.

Description:  The building faces east and is a three story white colored native limestone structure. The building is located on landscaped grounds in the center of Comanche. The building has high narrow windows and the limestone facing was quarried in the area. Heroic sized cut stone eagles accent the north and south entrances. The wings are one story on either side of the central section. This was a Work Projects Administration project. Located behind the courthouse is the Old Cora Courthouse and to the west is the old stone County Jail at 301 Central Avenue. History:  The county was created in 1856 and Cora was selected as the county seat. The first courthouse was built in 1856 and is still standing. The county seat was moved to Comanche in 1859 and a one room building made of pickets called Silas Pickett’s building was rented until the second courthouse, a two story red colored brick structure was designed by Martin V Fleming and built by Martin, Byrne & Johnston in 1876 at a cost of $12,000. The third courthouse was a stone structure designed by Lamour and Watson and constructed by Moody & Ellis in 1890 at a cost of $76,000. The fourth and present courthouse was constructed in 1941 to 1942 at a cost of $195,000. The native stone was quarried about six miles west of Comanche.