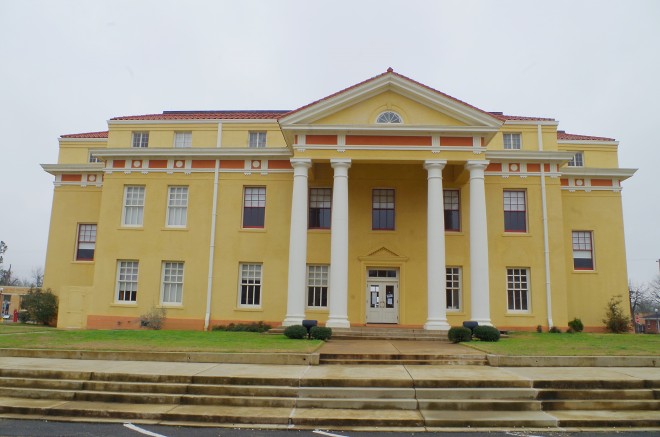 Cass County is named for Lewis Cass, who a senator from Michigan, who favored the annexation of Texas to the United States.

Description:  The building faces north and  is a three story yellow colored brick, limestone and concrete structure. The building is located on the landscaped grounds of Courthouse Square in the center of Linden. The front has a large portico supported by four high columns with pediment at the roof line. The east and west wings are recessed. The third story windows are small. And the roof is hipped. In the interior, the courtroom is located on the second story. The building houses the State District Court, Constitutional County Court, County Court at Law and County Justice Court. In 1905, an addition was constructed. The contractor was B H Singletary. In 1917, the building was remodeled to the Classical Revival style. The architect was Stewart Moore and the engineer was Fred Halsey. An addition was constructed on the west side in 1980.The building is being renovated in 2010 to 2012. The architect is ARCHITEXAS Architectural Planning and Historical Preservation Inc. and the contractor is RBR Construction Inc. 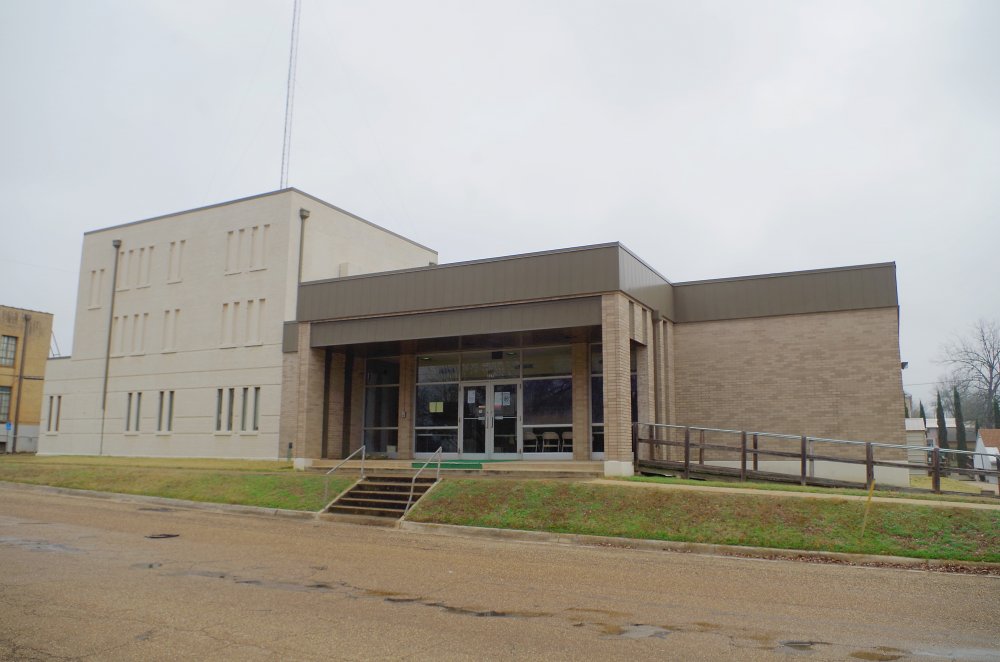 Description:  The building faces south and is a one story brown colored brick and concrete structure. The building is located on landscaped grounds in the center of Linden to the east of the courthouse. The south front has a large porch with vertical brick pillars and recessed glass wall. A wide band runs along the flat roof line. On the west side is the three story jail.

History:  The county was created in 1846 and Jefferson was selected as the county seat. When the county seat was moved to Linden in 1852, the first courthouse in Linden was a two story wood frame structure built on Courthouse Square in 1853 to 1854. The second and present courthouse was constructed in 1859 to 1861 and was a two-story Greek Revival style building made of locally fired brick ( painted Spanish brown ) with a hipped roof and a central, square drum with a small cupola on top. It retained this appearance until 1905 when a twenty foot addition was built onto the east side and the brick was painted Venetian red. In 1908, a tornado swept through Linden damaging the town and the courthouse, destroying the building’s cupola. The courthouse was repaired and a Queen-Anne style cupola was added to the building the following year. In May of 1933, a fire destroyed the porticoes and the roof over the centrally located courtroom. Repairs were completed in 1934 with an extended third story over the courtroom with a concrete and steel truss to stabilize the building. Around 1940, the exterior of the building was painted white and then painted yellow in 2010 to 2012. The County Criminal Justice Center was constructed in 1975 to 1976. 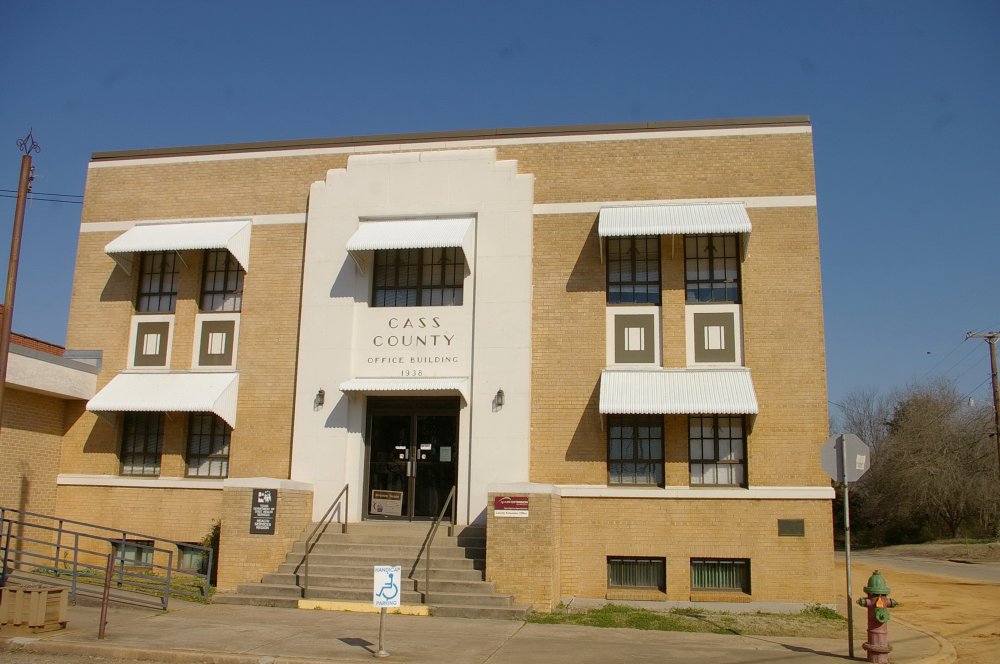 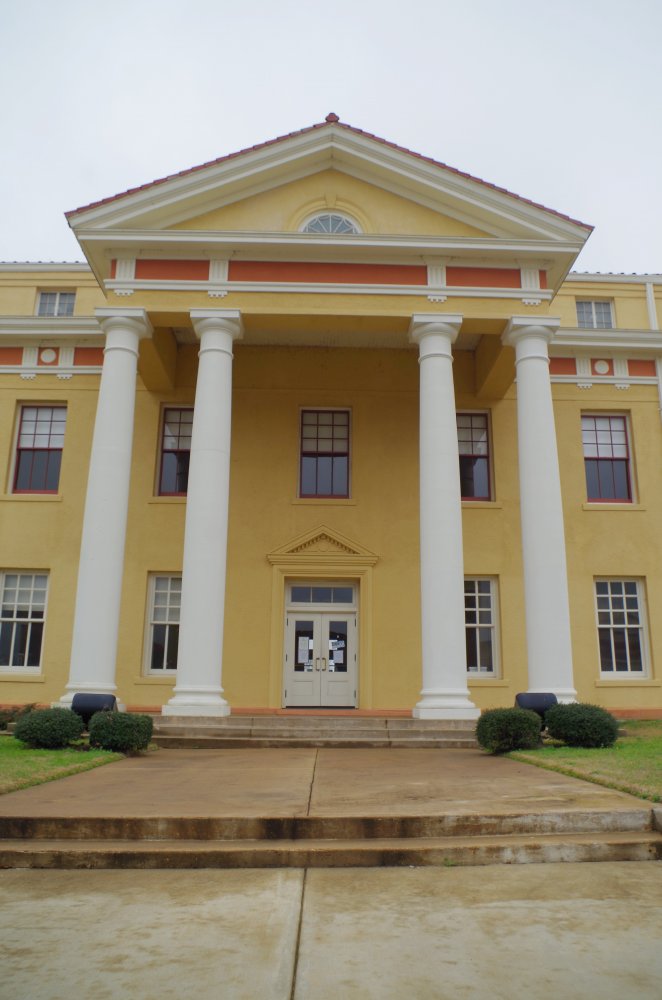 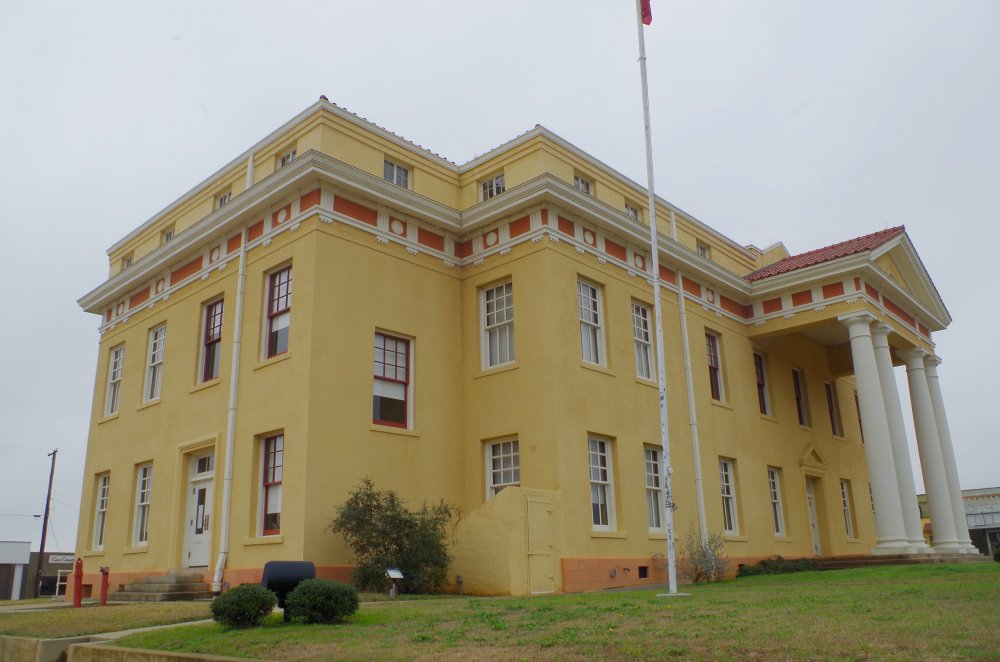 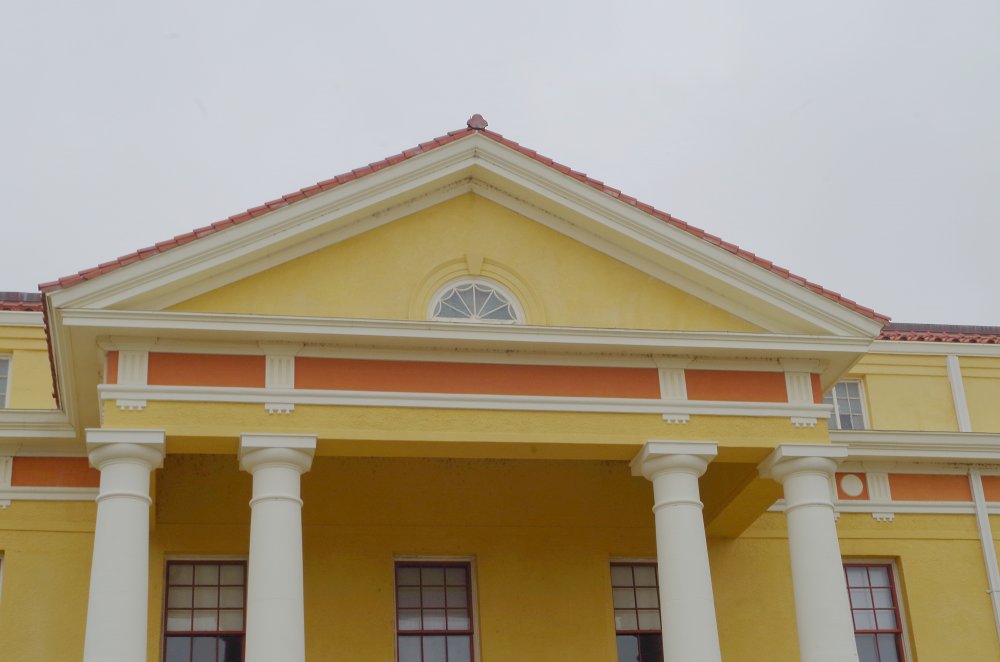 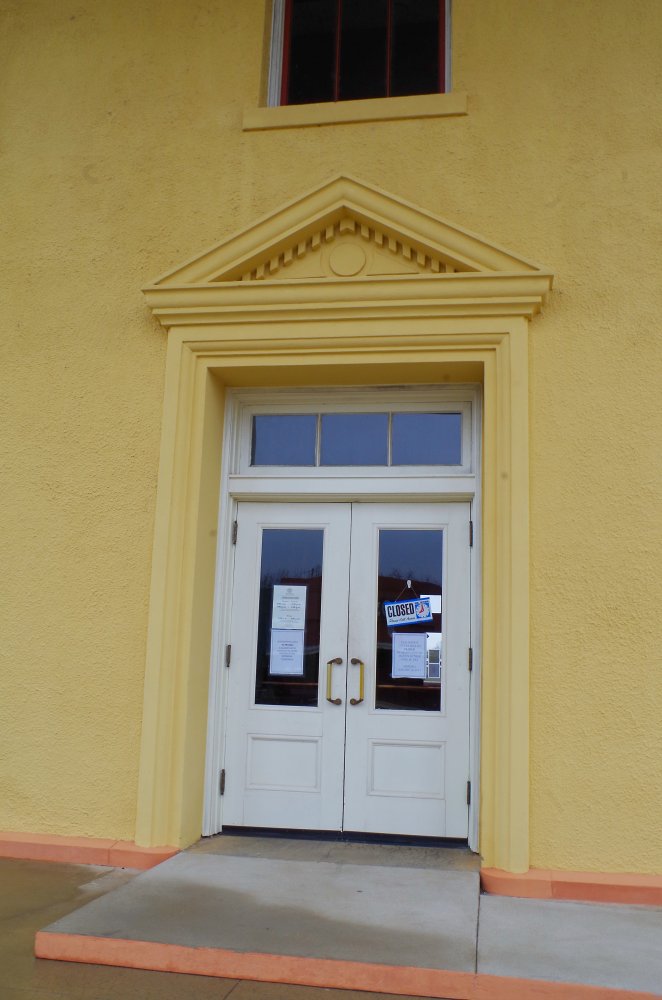 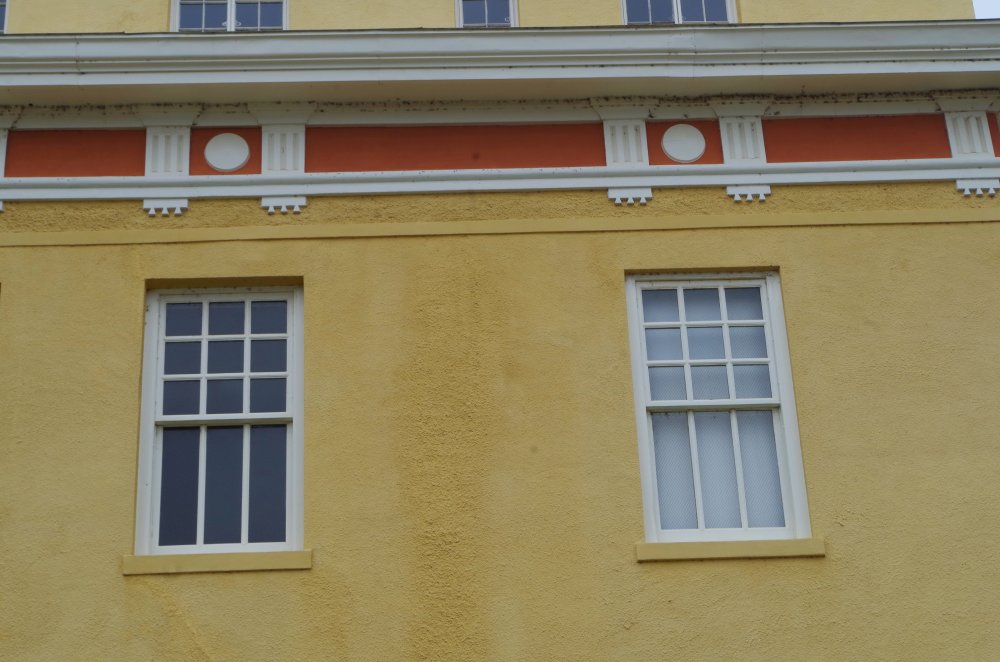 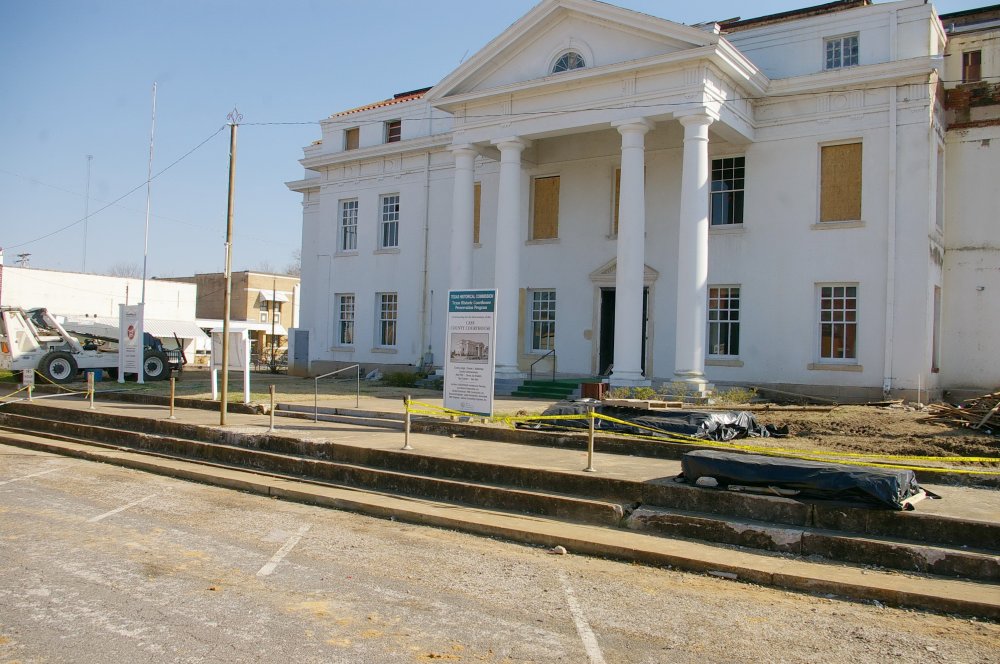 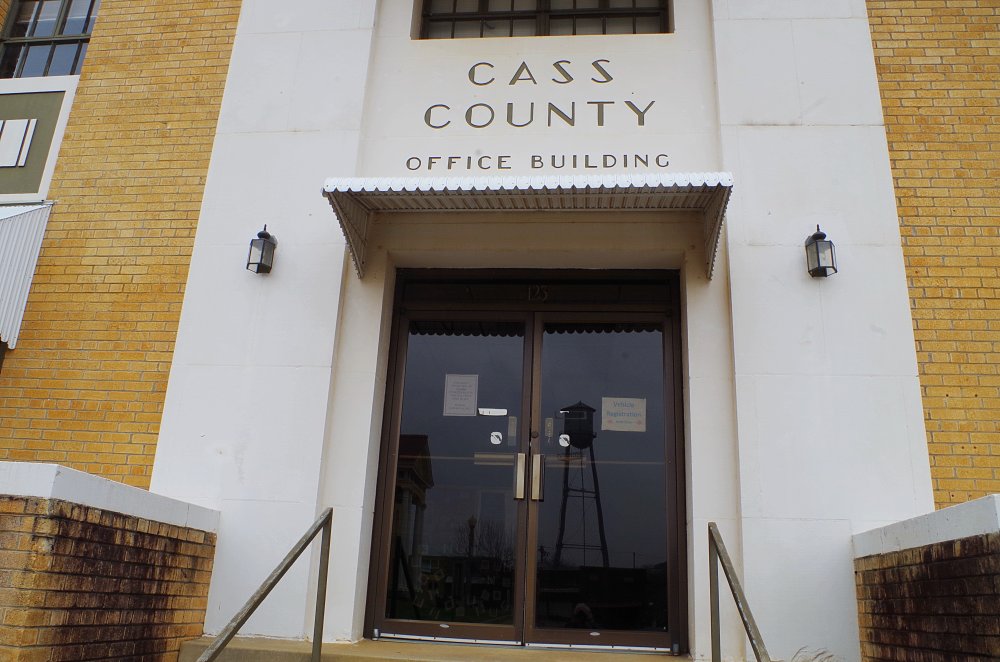 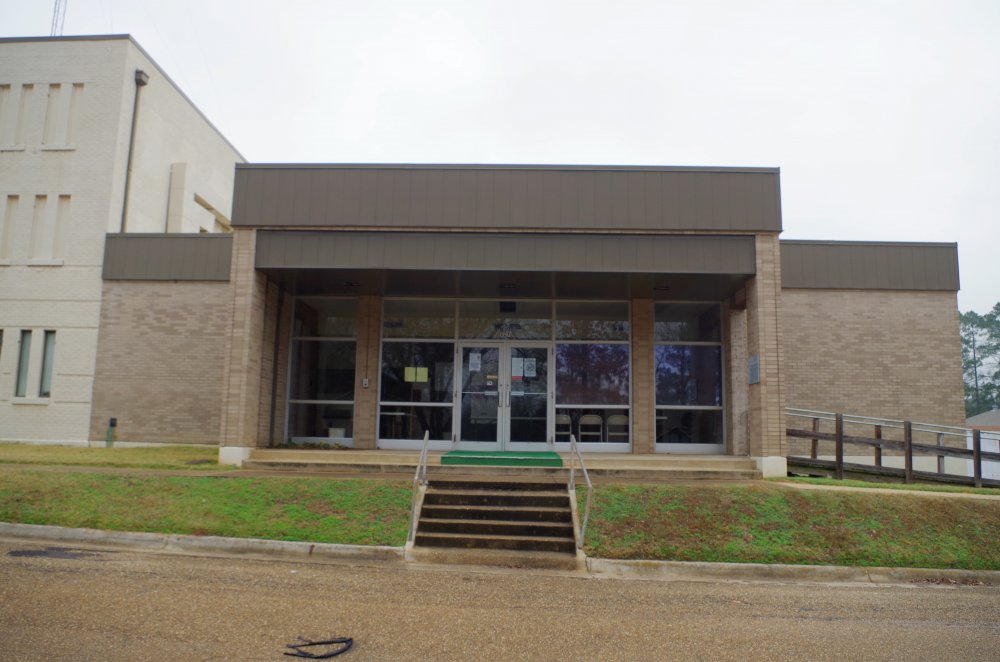 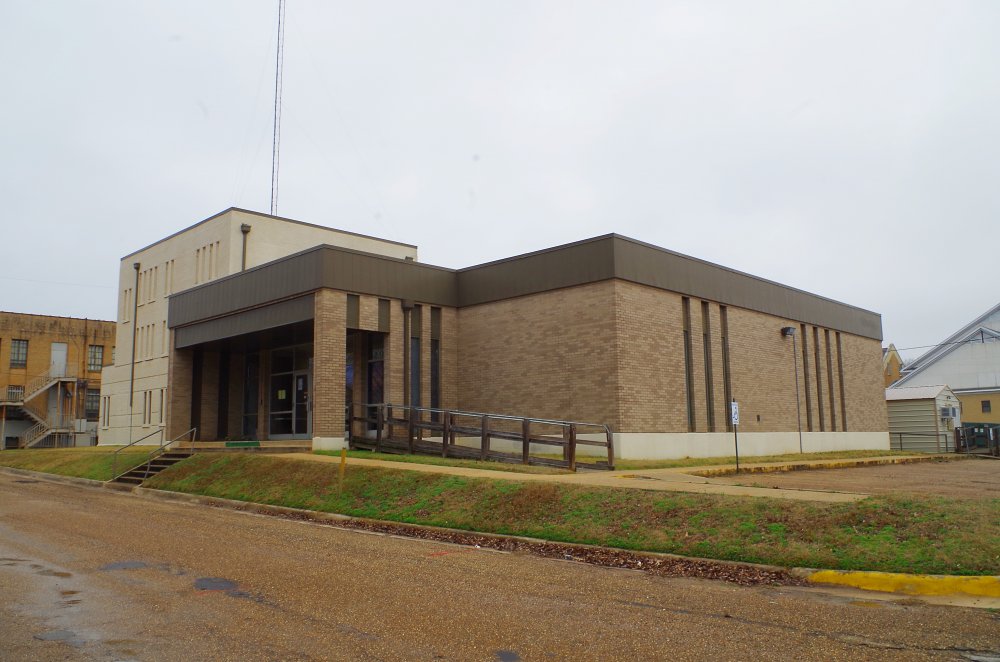