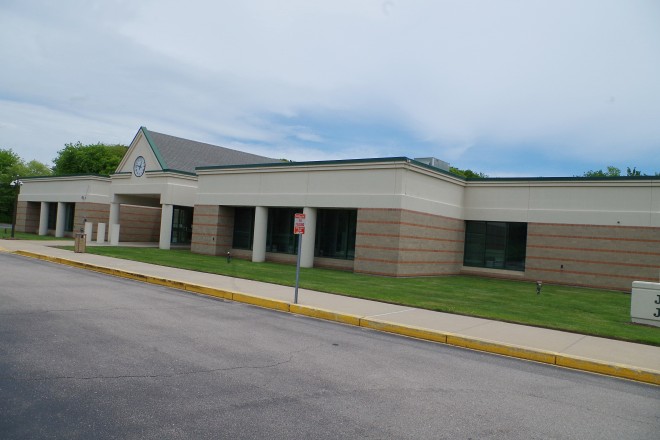 Description:  The building faces northwest and is a one story buff colored brick, concrete and glass structure. The building is located on spacious landscaped grounds. The northwest front has a high central portico with recessed entrance and with clock and hipped roof above. The windows are divided by concrete columns. A wide white colored concrete band runs below the flat roof line. The building is named as the J Howard McGraith Judicial Complex. The engineer for the construction was Ronald M Ash and Associates. Description:  The building faces south and is a three story light brown colored wood  structure. The building is located on landscaped grounds with the stone Clerks Office built in 1876 on the west side. The south front has a central projecting section with entrance on the first story rising to a mansard roof with open octagonal cupola at the top. The building has a mansard roof. In 1816 the  mansard roof and the central pavilion and tower were added. An addition was added on the north side in 1876. The building is now the Kingston Free Library. Across Kingston Road is the Old Washington County Jail constructed of granite blocks in 1858. John Eldred did the excavation, masonry, plastering and the Fayerweather family were the blacksmiths. The building was closed as a jail in 1956 and became the South County History Center.

Note: William Potter oversaw the construction of the courthouse and the carpenter was Caleb Wescott. Description:  The building faces south and is a two story gray colored stone structure. The building is located on spacious landscaped grounds. The southwest corner has a four story square stone tower with steep green colored roof at the top. The south front has a central stone portico with arched entrance. The roof is hipped. The architect was and the contractor was The building is now the Courthouse Center for the Arts.