Blair County is named for John Blair, who was a local leader. 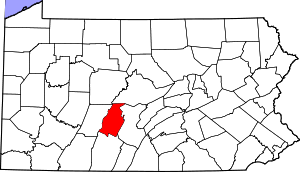 Description:  The building faces south and is a two story stone style structure. The building is T-shaped in plan and all exterior walls are of stone with cut stone facing. The building has three arches at the entrance and three arches above on the second story. On either side of the central section are large square stone towers with arched windows and mansard roofs. On the north side is the addition built in 1906 with clock tower and high steep roof. In 1906 and 1907, the rear three story addition was added. The architect was William L Plack and the contractor was W V Hughes and Son of Hollidaysburg.

History:  The county was created in 1846 and Hollidaysburg was selected as the county seat. The first courthouse was a two story brick structure built in 1847. The second and present courthouse was constructed in 1875 to 1877. Description:  The building faces south and is a four story buff colored stone, glass and concrete structure. The building is located on landscaped grounds in the center of Hollidaysburg on the west side of the courthouse. The building has square towers rising to blue colored fourth stories with arched windows. and mansard roofs.