Harney County is named for William S Harney, who was a cavalry officer and who was involved in the Pig War. 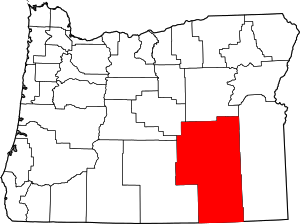 Description:  The building faces east and is a two story light red brick and concrete structure. The building is located on landscaped grounds in the center of Burns. The building is rectangular shaped with the main entrance at the center of the east side. Decoration is concentrated on the central entry, where concrete fluting flanks a tall twelve-pane window over the two front doors. A white colored concrete band runs below the first story. There are white colored vertical panels between the first and second story windows. The roof line is flat. The courtroom is located on the second story. The building houses the County Circuit of the 24th Judicial District, County Court and County Justice Court. During construction J Elwood Isted was appointed Clerk of the Works.

History:  The county was created in 1898 and Burns was selected as the county seat. The first courthouse was built in 1890 as the Smith and Young Building and donated to the county. In 1940, the county moved into the Brown Building on Broadway and is still standing. The third and present courthouse was constructed in 1941 to 1942 at a cost of $68,231.