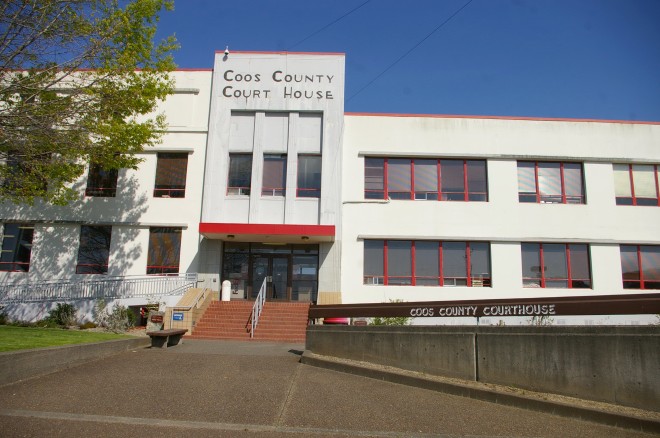 Coos County is named for Native American Coos Tribe, who lived in the region.

Description:  The building faces west and is a two story white colored stucco and concrete structure. The building is “U” shaped with wings extending to the east. The west front has a central entrance on the first story with red colored canopy and three vertical windows on the second story and rising to a section above the roof line. The groups of windows are horizontal. The roof line is flat. On the south side is the jail.

Note:  The first courthouse built in Empire City. The second courthouse was designed by Charles H Burggraf and constructed by Harmon Smook in Coquille 1898. An addition was added in 1916 as the Hall of Records. The contractor was W W Ledd. In 1951, the old courthouse was torn down and the Hall of Records was remodeled with the addition of two wings in 1951 and 1953 at the cost of $180,000 and $260,000 for each wing. Description:  The building faces west and is a two story white colored stucco and concrete structure. The building was constructed as the Keizer Brothers Hospital under the direction of Phil Keizer and Russell Keizer both Portland doctors. The west front has a recessed central entrance on the first story. The north and south sections project to the street line and rise to peaked roofs. A wing was added on the north side in 1924 to 1925.