Trumbull County is named for Jonathan Trumbull, who was a Governor of Connecticut when the county was organized.

Description:  The building faces south and is a three story course buff colored Amherst limestone structure. The building is located on spacious landscaped grounds in the center of Warren. The south front has three large arches at the central entrance with a round stone tower on each side. On the second story is a balcony with large arched window and rising to a peak at the third story. On each corner of the building are projecting sections rising to a peak. On the center of the roof is a large round clock tower with green colored dome and small cupola at the top. The green colored roof is sloped. In the interior, the corridors have Romanesque colors of terra cotta tones above white colored marble wainscot. The stairways feature pink colored Tennessee marble. The first story has the Memorial Room on the east end; on the second story is the east courtroom No. 4 with Louis XIV ornamentation in cerulean blue and old rose and courtroom No. 3 and on the third story is courtroom No. 1 with olive and chamois tones of Renaissance decoration, judge’s oak bench and paneled oak and courtroom No. 2 with quiet green effects and fireplace of green colored tile. The building houses the County Court of Common Pleas – General and Probate Divisions. The building was restored in 1993. The architect was Van Dijk, Pace, Westlake Architects of Cleveland and the contractor was Jack Gibson Construction Company of Warren. 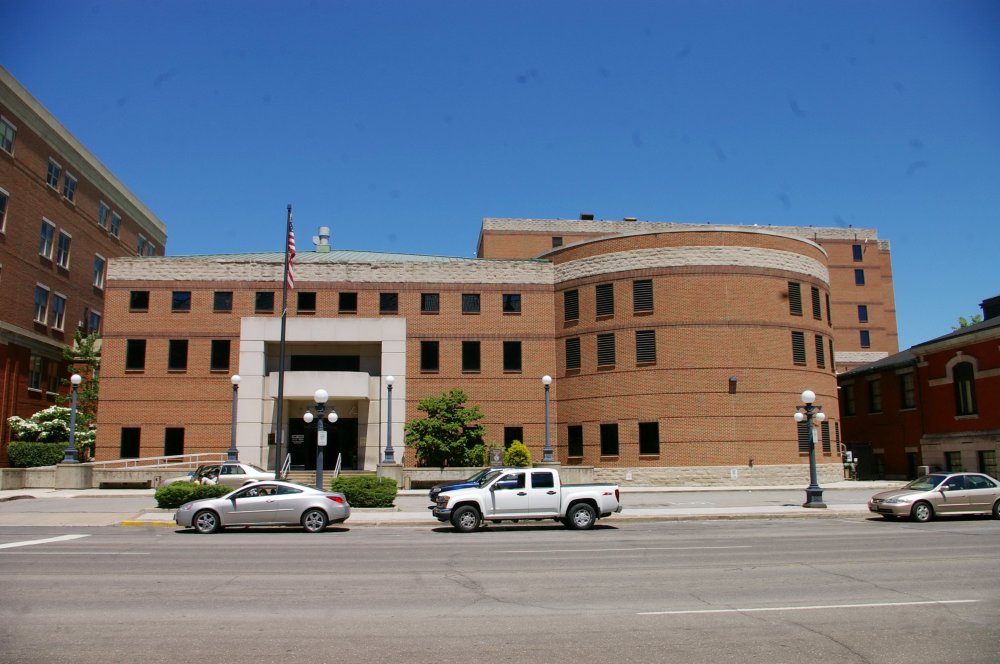 Description:  The building faces south and is a three story red colored brick and concrete structure. The building is located on the north side of the courthouse and next to the County Administration Building. The south front has a large framed entrance with recessed doorway. On the east side of the front, the building is curves outward. A horizontal band runs along the roof line with sloped roof. On the north side is a seven story section which extends east to North Park Avenue. This section has a flat roof line. Description:  The building faces south and is a five story red and buff colored brick and concrete  structure. The building is located on the north side of the courthouse and next to the County Justice Center. The south front has a two story curved portico supported by four concrete columns rising to a flat roof. The entrance is recessed. The first two stories are dark red colored brick and the upper stories are buff colored brick. A horizontal band runs above the second story and along the flat roof line.

See:  The Ohio Court of Appeals – Warren is located in the county. 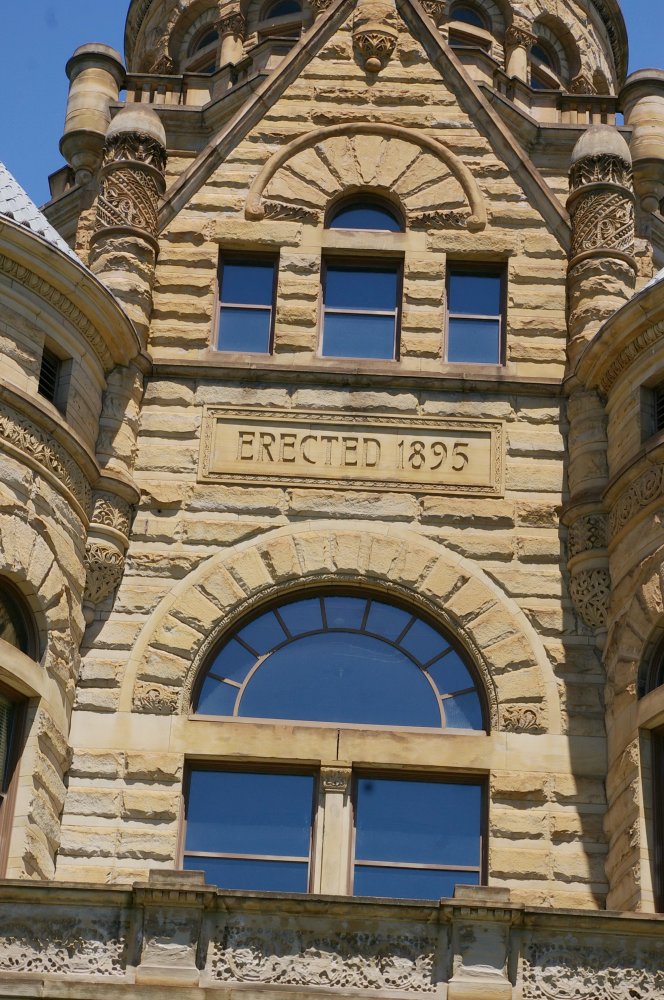 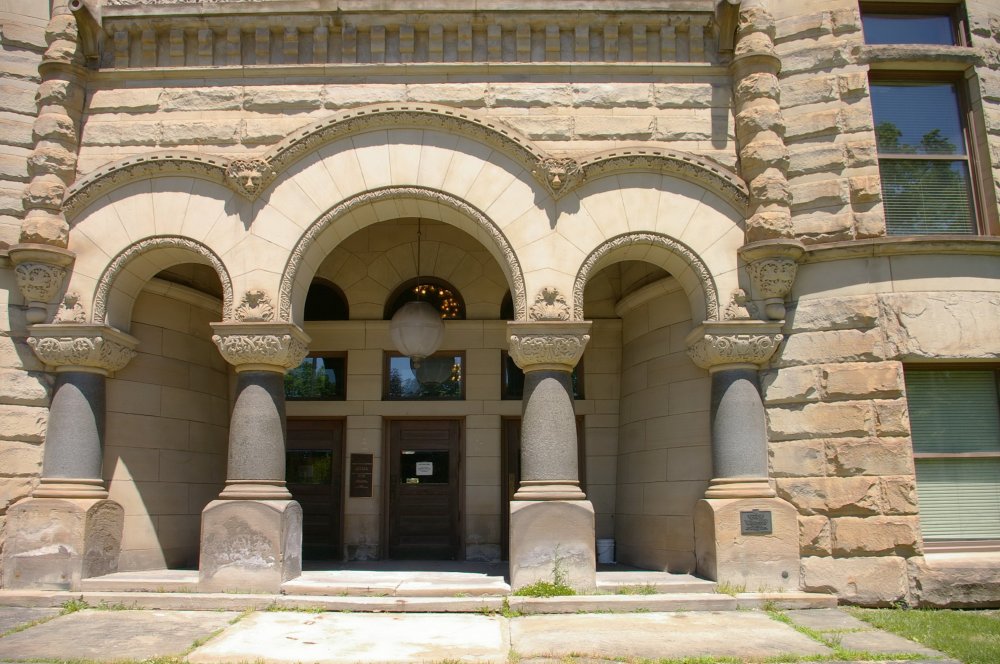 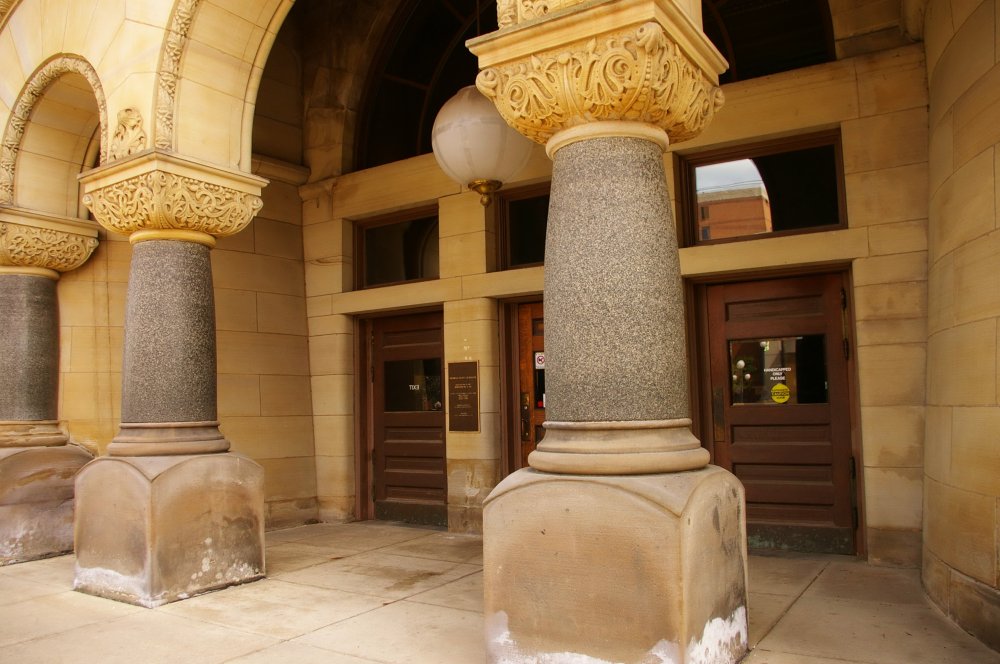