Hancock County is named for John Hancock, who was a signer of the Declaration of Independence. 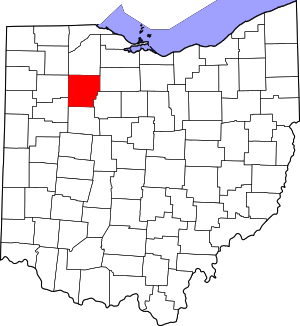 Description:  The building faces east and is a two story brown colored sandstone structure. The east front has a one story portico with balcony. On the second story is a large arched window. Above are the statues of Justice, Law and Mercy. The north and south sections have center sections that rise to a peak above the roof line. On the center of the roof is a square stone clock tower with dome and Statue of John Hancock at the top. Description:  The building faces west and is a two story wood frame structure. The building was moved to this site. The rectangular shaped building is located on landscaped grounds and is now a residence. There is a central entrance and the roof is hipped.

Note:  The building was the first courthouse and was located at the southwest corner of Main Street and Putnam ( Crawford ) Street. The cost of construction was $700 and the plaster work was completed by Parlee Carlin.

History:  The county was created in 1820 and Findlay was selected as the county seat in 1828. The first courthouse was a two story frame structure built in 1833 which is still standing. The second and present courthouse was constructed in 1886 to 1888.