Pierce County is named for Gilbert Ashville Pierce ( 1839-1901 ), who was a governor of the Dakota Territory from 1889 to 1891, and later one of North Dakota’s first United States Senators. 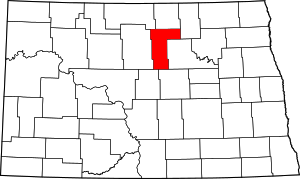 Description:  The building faces north and is a three story chocolate brown colored brick and concrete structure. The building is located on landscaped grounds in the center of Rugby. The building has a raised bnasement. On the center of the roof is a dome with silver colored roof topped by a smaller dome. The north front has a Greek style portico supported by two large stone columns. The interior has fine dark red colored marble wainscoting and pink colored marble rotunda pilasters. The rotunda skylight remains intact and is illuminated by natural light from above, and the rotunda is especially rich in stencil wall treatments and four fine murals depicting historic scenes of the area. The County District Court courtroom on the east side of the third story has been altered by installation of acoustical tile in the recesses of the coffered ceiling, but otherwise retains its fine woodwork, furnishings, light fixtures, and mural. The building houses the County District Court of the Northeast Judicial District. Two rooms in the basement and first floor have been altered by installation of wooden partition walls. On the south side of the courthouse is the Sheriff Residence and Jail.

Note:  The ceiling of the dome is divided into four panels, and is beautifully decorated with paintings of large size illustrating the four epochs of this part of the country. On the north panel is a buffalo hunting scene; on the west is a picture of the family bound for this country in the old-time prairie schooner; on the east is the primitive shack with a small patch of broken ground, and on the south panel is shown the modern way of plowing with powerful traction engine.