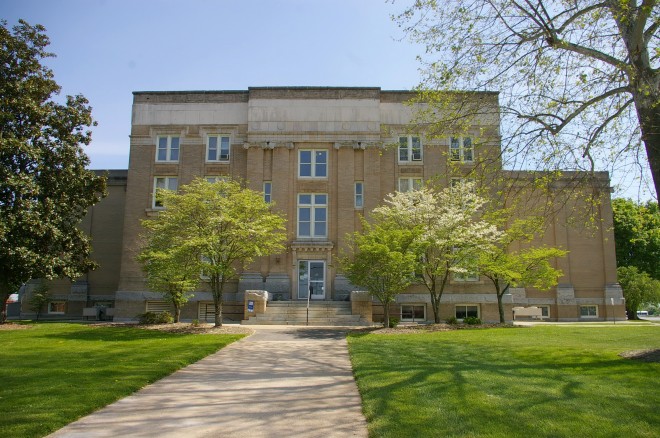 Surry County is named for Surrey County in England, which was the birthplace of Governor William Tyron.

Description:  The building faces north and is a three story buff colored brick and concrete structure. The building is located on landscaped grounds in the center of Dobson. The north front has a projecting center section with entrance on the first story. A wide band runs below the flat roof line. There are lower east and west wings. In the interior, the first story has a central hallway. There are two courtrooms located on the second story. Two story additions were constructed in 1971 on the east and west side. Description:  The building faces south and is a three story buff and red colored brick and concrete structure. The building is located on landscaped grounds in the center of Dobson. The south front projects from the main building and id buff brick with a high vertical window on the second and third stories. The southwest and southeast corners are red colored brick. The roof line is flat. The building houses the County Superior Court and County District Court of the 17th Judicial District. Description:  The building faces east and is a two story red colored brick structure. The  building is located on landscaped grounds in Rockford, The square shaped building has a hipped roof. The building sits on a low hill and is a private residence. The building served as the courthouse until 1853 when the county seat was moved to Dobson.