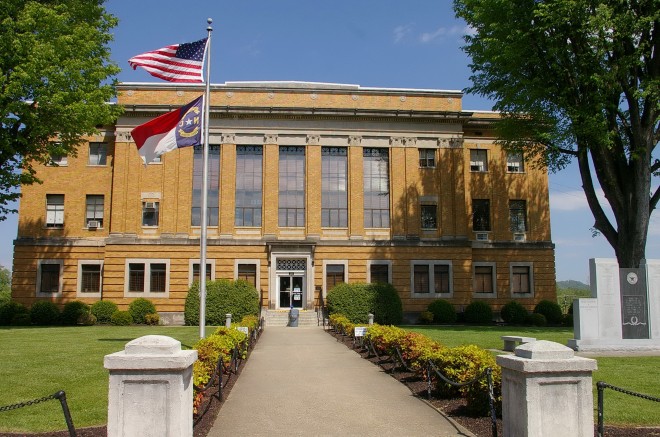 McDowell County is named for Joseph McDowell, who was a soldier in the American Revolutionary War and who took part in the Battle of Kings Mountain.

Description:  The building faces southwest and is a three story yellow-brown colored brick, stone and concrete structure. The rectangular shaped building is located on landscaped grounds in the center of Marion.  The southwest front has horizontal brickwork on the first story with a central entrance. On the second and third stories are five large vertical windows. The roof line is flat. In the interior are wide cross halls lined with marble wainscoting which intersect at an octagonal center. Stairs with metal railings are located at the ends of the north and south halls. The courtroom is located on the second story and has a pedimented frontpiece on the wall behind the judge’s bench and pilasters with egg and dart mouldings which divide the window bays. The building houses the County Superior Court and County District Court of the 29th Judicial District.

History:  The county was created in 1842 and Marion was selected as the county seat in 1844 when the county was organized. The first courthouse was built in 1844. The building was remodeled in 1902. The architect and contractor was B F Smith Fireproof Construction Company. The second and present courthouse was constructed in 1921 to 1923 at a cost of $210,000.