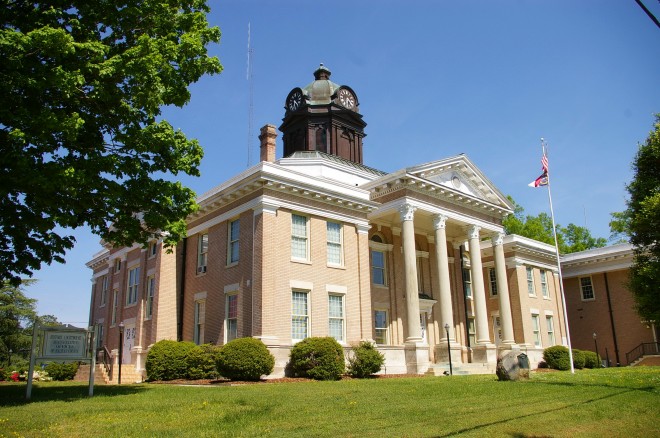 Halifax County is named for George Montague-Dunk, who was the 2nd Earl of Halifax, a British statesman and President of the Board of Trade.

Description:  The building faces southeast and is a two story buff colored brick and concrete structure. The building is located on landscaped grounds in the center of Halifax. The southeast front has a large portico with four Corinthian columns rising to a pediment at the roof line. On the center of the roof is a dome with clock and green colored roof. The courtroom is located on the second story.  An addition was built on the northwest side in 1965. The architect was Charles C Davis Jr. and the contractor was William K Neal. Contractor:  J B McCaffrey of Durham and G W Francis & Associates of Raleigh.

Description:  The building faces northwest and is a two story red colored brick and concrete structure. The building is located on spacious landscaped grounds to the south of the center of Halifax to the south of the old courthouse. The northwest front has a projecting center section on the second story with six arched openings and dormers on the hipped roof. The first story is below ground on the north side. The building houses the Superior Court and District Court of the 6th Judicial District.