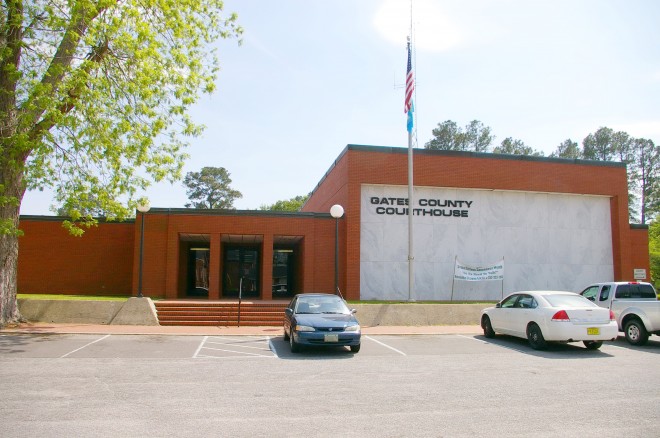 Gates County is named for Horatio Gates, who was an American general during the American Revolutionary War at the Battle of Saratoga.

Description:  The building faces north and is a one story dark red colored brick and concrete structure. The building is located on landscaped grounds in the center of Gatesville. The north front has a central entrance with dark glass panels. On the west side is a higher section with a recessed stone wall. The roof line is flat. The large courtroom is located on the south side; Description:  The building faces north and is a one story light red colored brick structure. The building is located on landscaped grounds in the center of Gatesville. The north front has a central recessed entrance and the windows are horizontal. The roof is hipped. The courthouse is along the west side of the building. Description:  The building faces south and is a two story yellow colored stuccoed brick structure. The building is located on landscaped grounds in the center of Gatesville to the north across from the courthouse.  In 1904, the building was covered with stucco. The south front has a central projecting section with entrance on the first story and a small wrought iron balcony on the second story. At the peak is a large fanlight. Wings extend east and west with a hipped rood and centered square wood cupola with steep roof. The interior has a cross hall plan on the first story with stairs at either end. The former courtroom is located on the second story. In 1940, an addition was constructed on the north side giving the building an “H” shape. The contractor was D K Cecil & Company. The building is now used as a library. In 2019, the windows were replaced.

See:  The only other Federal style courthouse is located in Perquimans County.

History:  The county was created in 1778 and Gatesville was selected as the county seat. The first courthouse and prison were built in Gatesville in 1780. The second courthouse was built in 1836 and is still standing. The Court ordered the clerk William Daughtry to supervise the construction of the courthouse. Dr. John B Baker, who donated the land and who was a large land owner in the county, was assisted in the construction by James R Riddick,William B Stephens and Henry Gilliam. The third and present courthouse was constructed in 1975 to 1976.