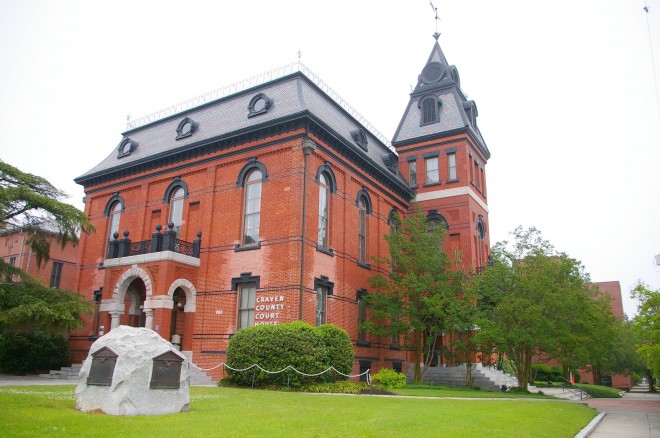 Craven County is named for William Craven, who was the 1st Earl of Craven and was a Lord Proprietor of colonial North Carolina.

Description:  The building faces east and is a two story dark red colored brick style structure. The rectangular shaped building is located on landscaped grounds in the center of New Bern. The east front has a high square tower with entrance on the first story and rising above the roof line with a steep roof. The second story windows are arched at the north and south ends are one story arched porticos. The building has a mansard roof. In the interior, the first story has a cross hall plan with central hallway. The courtroom on the second story spans the width of the building. The building houses the County Superior Court and County District Court of the 3rd Judicial District. On the west side is a red colored brick Courthouse Annex constructed in 1992 to 1993. The architect was Peterson Architects of New Bern and the contractor was Trader Construction Company of New Bern.

Description:  The building faces southeast and is a one story dark red colored brick and concrete structure. The southeast front has a white colored portico with four columns with pediment above the flat roof line.