Torrance County is named after Francis J Torrance, who was a promoter who took part in the building of the New Mexico central Railroad and who established a town named after himself.

Description: The building faces east and is a one story glass, stone and concrete structure. The building is located on landscaped grounds in the center of Estancia. The east front has a glass wall with the entrance foyer inside. The center section rises higher than the rest of the building, has large windows on the east side and has a wide concrete band around the flat roof line. On the north and south are low cut stone faced wings. The interior lobby has murals on the wall. The building houses the District Court of the 7th Judicial District.

Description:  The building faces east and is a one story white colored concrete structure. The building is located on landscaped grounds to the north of the center of Estancia. The east front has a central entrance with glass panels and canopy. The roof line is flat. The building houses the District Court of the 7th Judicial District.

Note:  When the Territorial Legislature fixed the boundary of Torrance County, Progresso was named the County Seat. The first County election was held in November, 1904, time for the official organization of Torrance County grew near, but one question remained. Where were the newly elected officials to meet? Progresso was the only railroad siding, but it had no building. The Santa Fe Central Railroad came to the rescue and sent a special train to Progresso on Sunday, January 1, 1905. On Monday, January 2, 1905, the newly elected officials took the oath of office in a passenger car which served as a court house. In February, 1905, Estancia was made the County Seat. 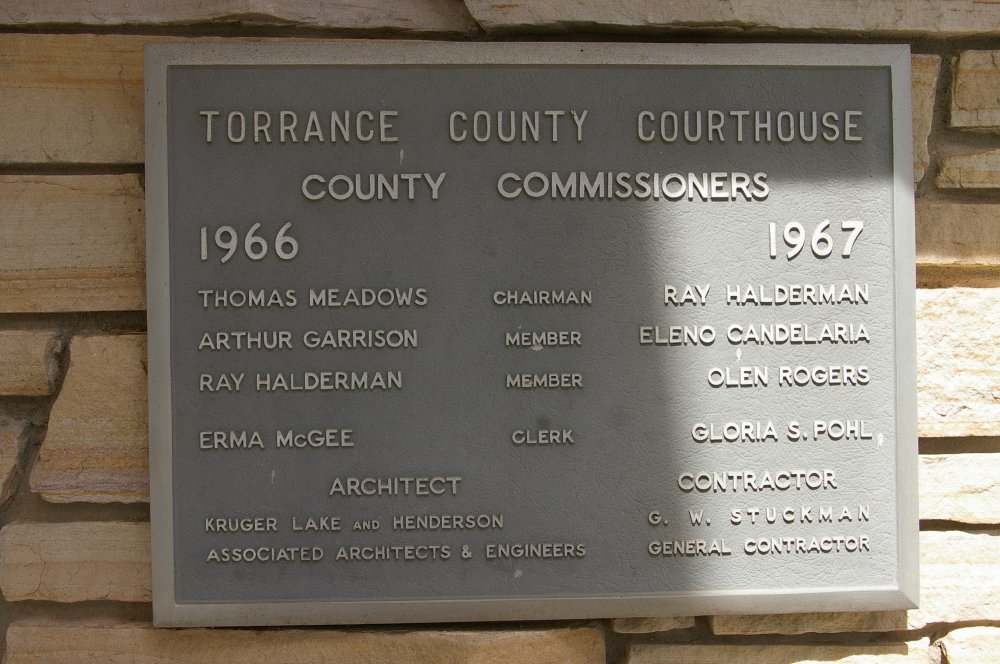