Socorro County was the named conferred by Don Juan de Onate upon a pueblo south of the present location of Socorro known as Teypana pueblo and renamed as Socorro. 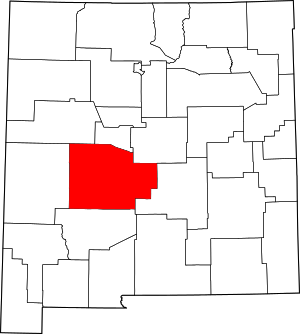 Description:  The building faces north and is a two story cream colored stucco, wood and concrete structure. The building is located on landscaped grounds in the center of Socorro. The north front has a recessed entrance with the crest above the doorway. The cornerstone of the 1884 building is set in the wall. The roof line is flat. The courtroom is located on the southeast side of the second story. The building houses the District Court of the 7th Judicial District. During construction, the supervisor was Charles C Spencer. Additions were completed in 1990. The architect was Dick Waggoner of Roswell and the contractor was Paul Goar Construction of Bosque Farms. Interior renovations were completed in 2001. The architect was James Patrick Lynch and the contractor was C C Construction. In 2001 a Jail addition was constructed. The architect was James Patrick Lynch and the contractors were Gentry Construction, C C Construction and Fred Tofoya Construction. On the north side is the County Administration Building.

Note: The 1884 courthouse in Socorro looked like the “Bates Hotel” with an
octagonal shaped jail house built in the rear. For years, this was
considered the most substantial jail in New Mexico and many criminals,
outlaws and prisoners were sent there for safe keeping.

Note:  Rumor has it that when the county seat was officially transferred to Socorro in 1867, the keeper of the documents at the former Lemitar county seat refused to turn them over (claiming that she had not been paid for her service) and had them destroyed.