Quay County is named for Matthew Stanley Quay, who was a United States Senator from Pennsylvania and who supported statehood for New Mexico. 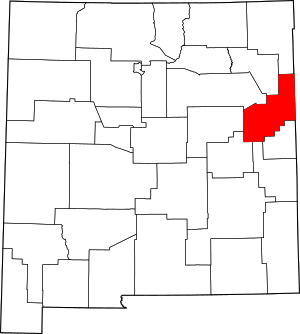 Architect:  Townes and Funk of Amarillo

Description: The building faces east and is a four story buff and brown colored brick , stone and concrete structure. The rectangular shaped building is located on landscaped grounds in the center of Tucumcari. The east front of the building is faced with white colored stone and has a long vertical brick pilasters framing the vertical windows. The center section rises higher than the north and south wings which project from the main section. The roof line is flat. In the interior, there is a large mural above the entrance lobby. The stairs have metal railings. The courtroom is located on the second story. The building houses the District Court of the 10th Judicial District.  The building was a Works Progress administration project.

History:  The county was created in 1903 and Tucumcari was selected as the county seat. The first courthouse was a two story brick structure built in 1908. The courthouse was demolished when the second and present courthouse was constructed in 1938 to 1939 at a cost of $218,118.