Luna County is named for Don Solomon Luna, who was a prominent political figure during the territorial days of New Mexico.

Description:  The building faces north and is a two story red colored brick, stone and concrete structure. The building is located on spacious landscaped grounds in the center of Dening. At the center of the north front is a tall square red colored brick clock tower with silver colored roof. At the entrance are wide steps and two large white colored columns supporting a white colored Greek style portico. The brick work in the front or north facade is embellished by quoins, belt courses and vertical details of rusticated brown colored native sandstone. The same stone is used to highlight the eight window-surrounds in each story which are arcaded in the second story and in the double window in the front of the clock tower. The arch is repeated in a detail over the clock tower window and around the doorway in the entry. Two large Ionic columns extend upwards from the front corners of the porch to support a triangular pediment with a boxed cornice and frieze decorated, in a dentil design. Situated between the pillars is a balcony with an iron railing which formerly led to the second floor through an entry recently enclosed. Triangular pediments are found again in the gabled dormers protruding from the roof on each end of the building and on each side of the clock tower. The pitched roof is composed of soft metal sheeting with a scallope pattern painted silver colored. Above the tower arranged octagonally are four clod faces separated by louvered panels topped by a tall steeple covered with the same silver colored roofing material employed below. The large courtroom is located on the second story. The building houses the District Court of the 6th Judicial District. On the east side is the red brick addition constructed in 1963 to connect with the old red colored brick Jail constructed in 1918.

History:  The county was created in 1901 and Deming was selected as the county seat. The first courthouse was the Clark Opera House. The second and present courthouse was constructed in 1910 to 1911 at a cost of $40,800. 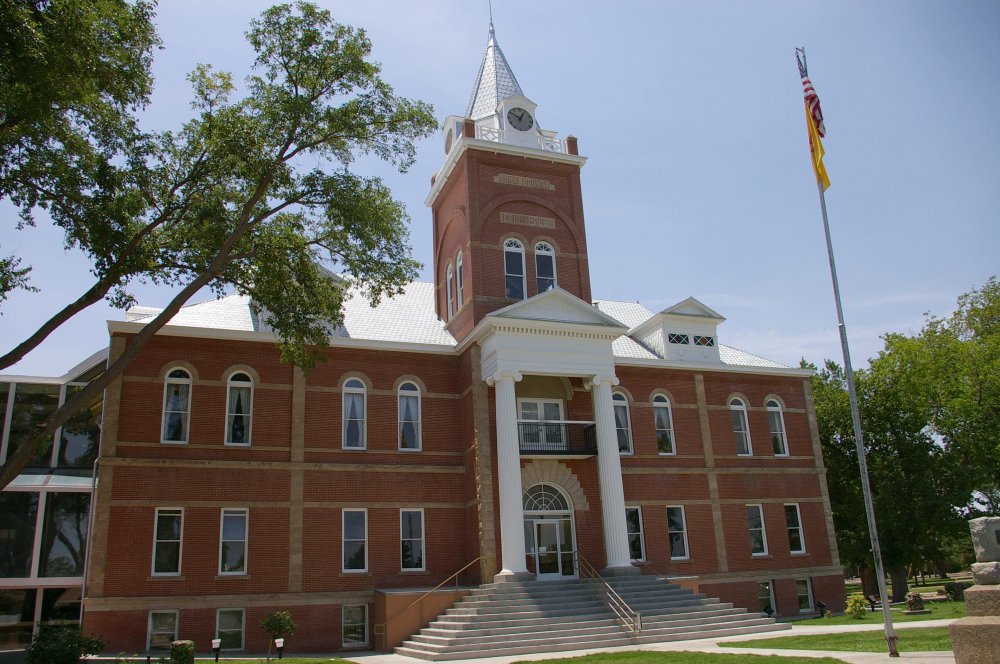