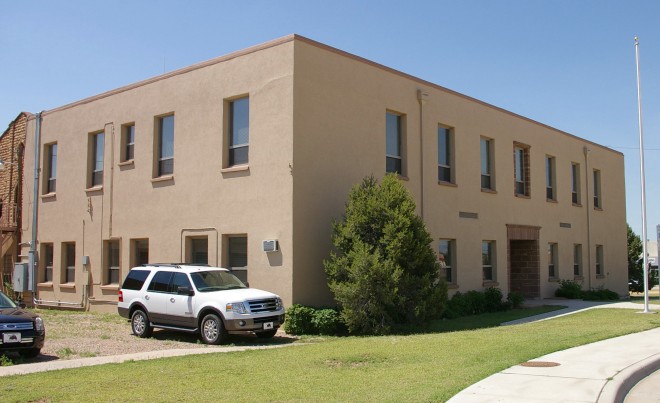 Guadalupe County is named for the Virgin of Guadalupe, patron saint of Mexico. 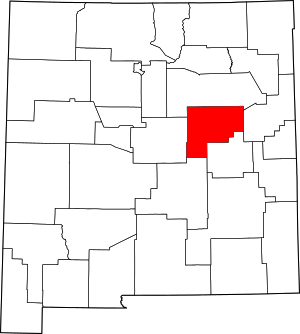 Description: The building faces west and is a two story cream colored stucco and concrete structure. The rectangular shaped building is located on landscaped grounds in the center of Santa Rosa. The west front and south side of the building have stonework around the entrances. The roof line is flat. The courtroom is located on the second story. The building houses the District Court of the 4th Judicial District.On the east side is the old dark red colored sandstone courthouse built in 1909. 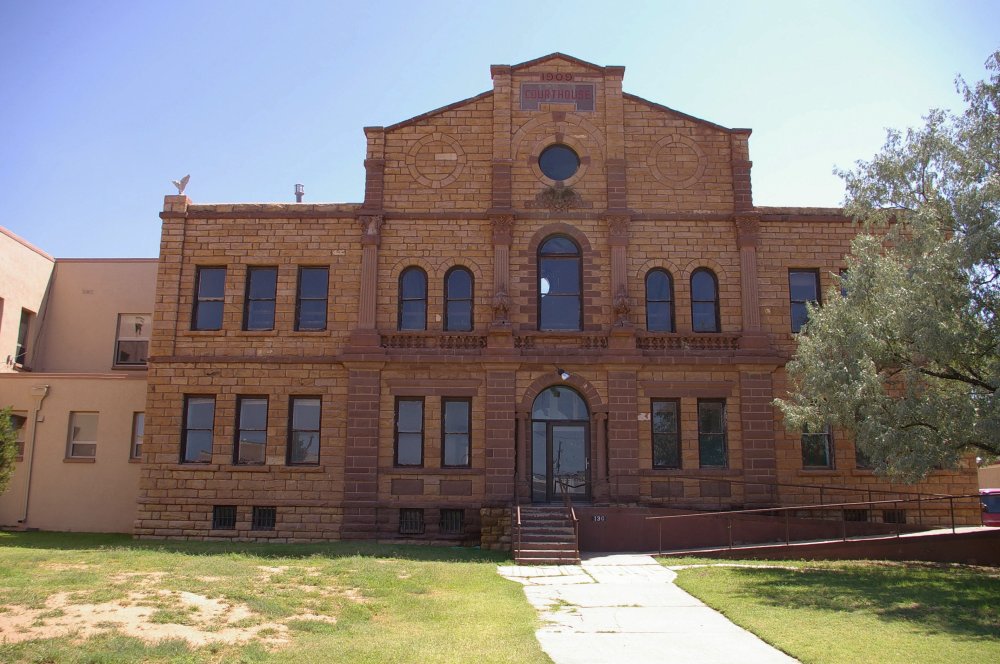 Architect:  I B Giles of Los Tanos

Description: The building faces southwest and is a two story red colored sandstone and concrete structure. The building is located on landscaped grounds of the courthouse square in the center of Santa Rosa on the east side of the courthouse. The southwest front has a central arched entrance with arched window above on the second story and flanked by two smaller arched windows on either side. The front rises to a peak with circular window. The east and west wings are lower in height. Located on the roof at the four corners of the building are carved sandstone eagles and urns; only one of the eagles remains due to deterioration. The false parapet on the southwest front facade is larger then the others and embellished with engaged stone pilasters, circular decorative stone inlay, and a cast panel which reads COURTHOUSE. The front facade consists of a central mass and two flanking bays. The second story is detailed with fluted stone engaged pilasters with eagle motif capitals, and with dark stone quoins and arched transom. The former courtroom is located on the second story which is now the Commissioners Chamber. The building is connected on the west side to the new courthouse and on the north side is the County Jail constructed in the 1970′s. The building was renovated in 2009. The architect was Kevin R Balchar and the contractor was Jim Sana Construction, Inc. 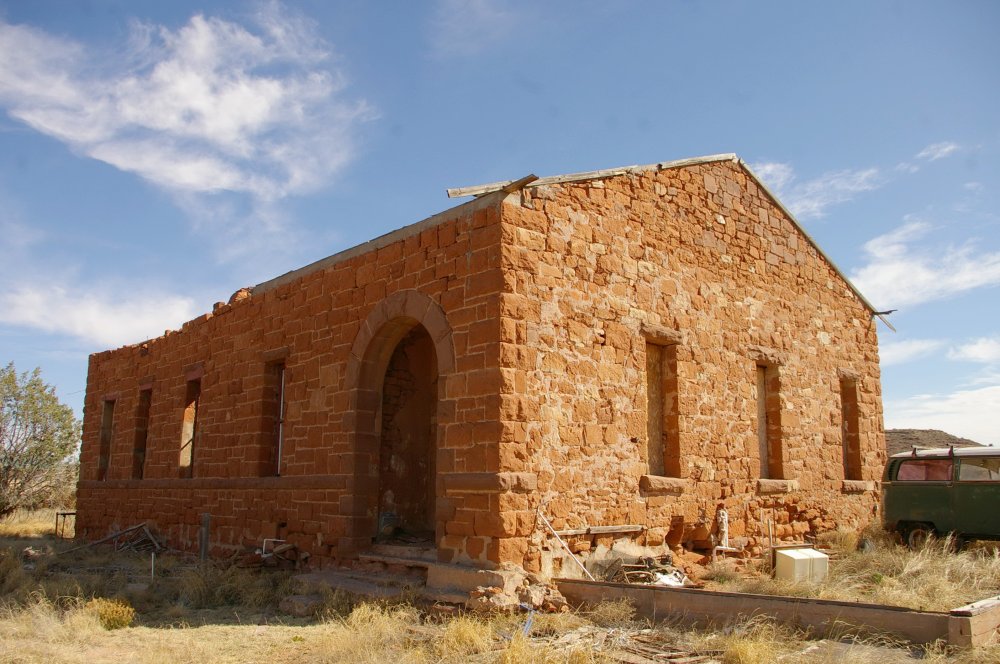 Description: The building faces north and is a one story red colored sandstone and wood structure. The building is located on private land on the east side of Puerto de Luna. The north side has a central entrance. The windows are rectangular and the roof was hipped. The courthouse burned around 1902 and the ruins remain..

History:  The county was created in 1891 and Puerto de Luna was selected as the county seat. The first courthouse was built in 1891 and the ruins are still standing. The county seat was moved to Santa Rosa in 1903 and the name was changed to Leonard Wood County. A temporary second courthouse, a two story stone structure was located on Third Street in 1903. The building was demolished in the 1950’s. In 1905, the county name was changed back to Guadalupe County. The third courthouse was constructed in 1909 at a cost of $13,935 and is still standing. The fourth and present courthouse was constructed in 1946 to 1948 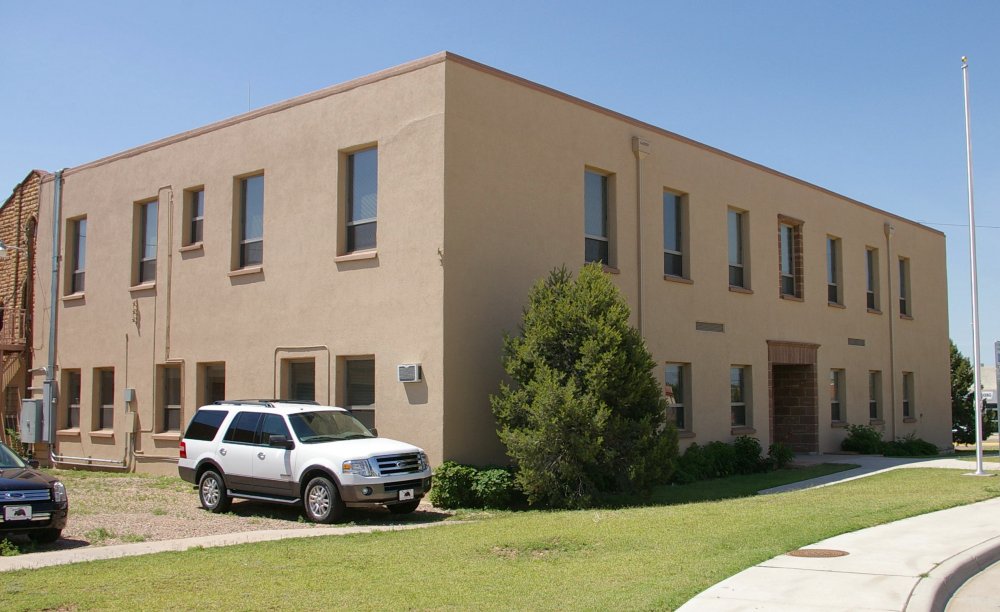 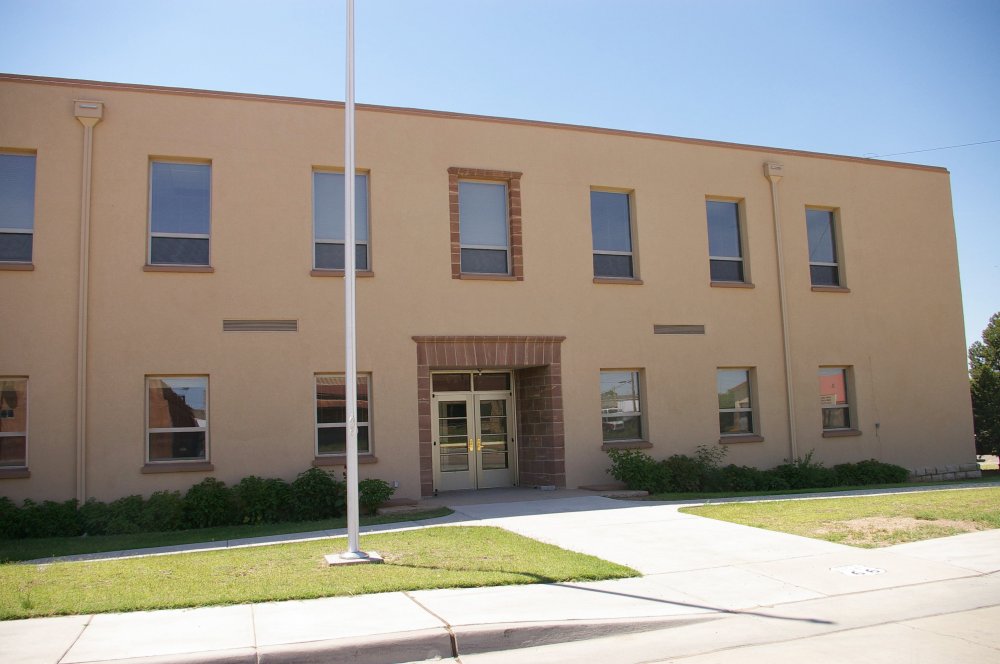 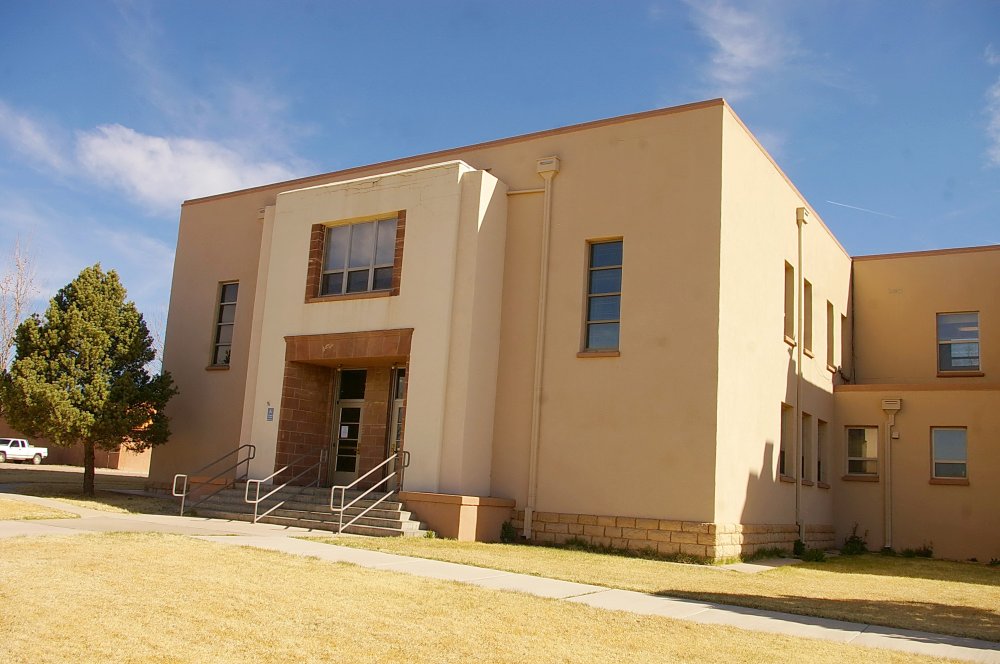 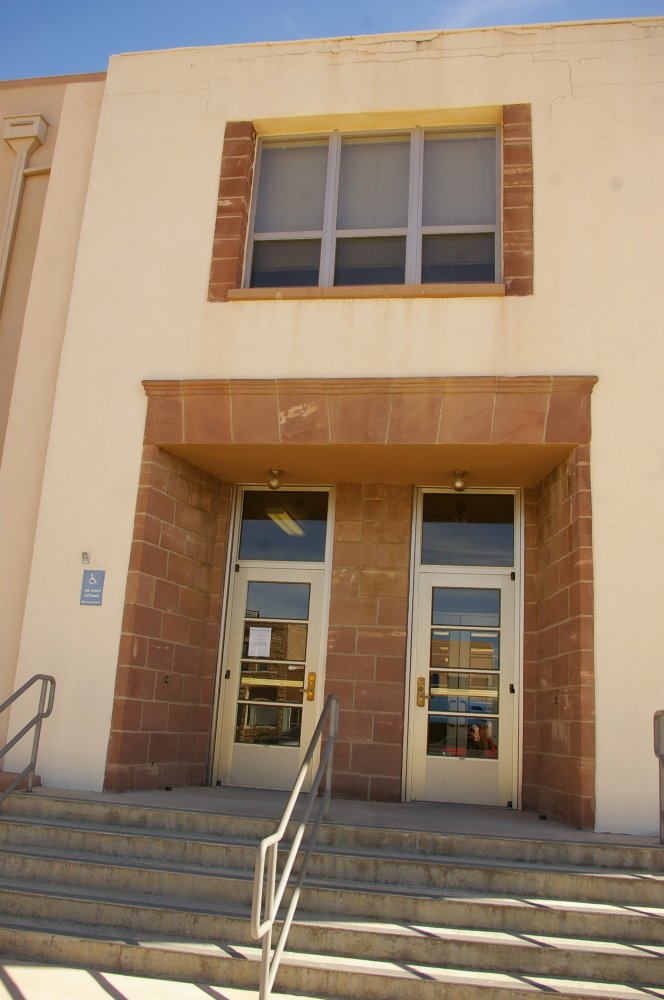 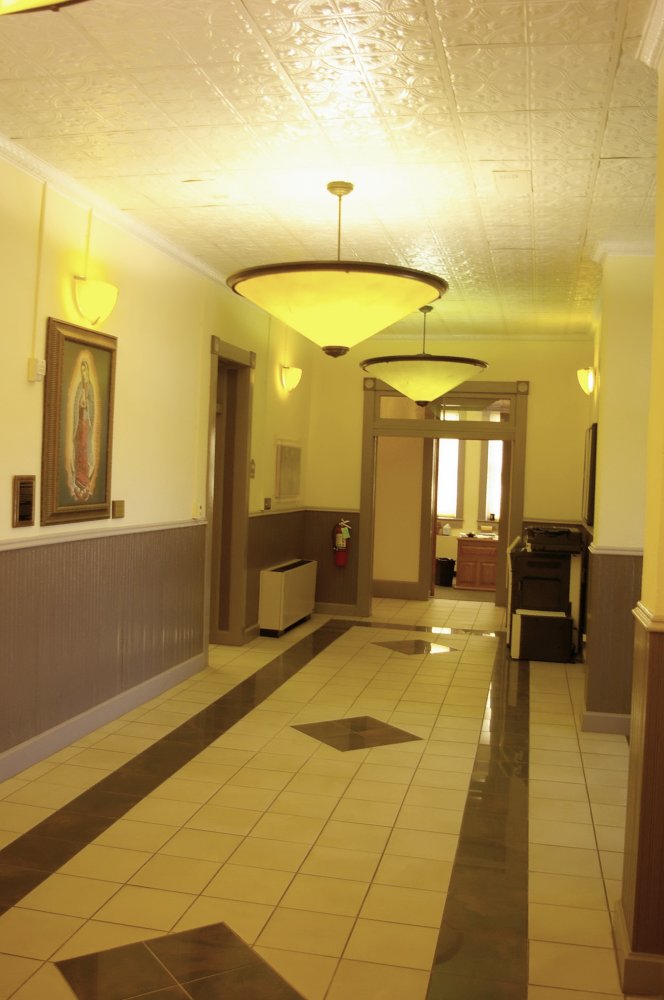 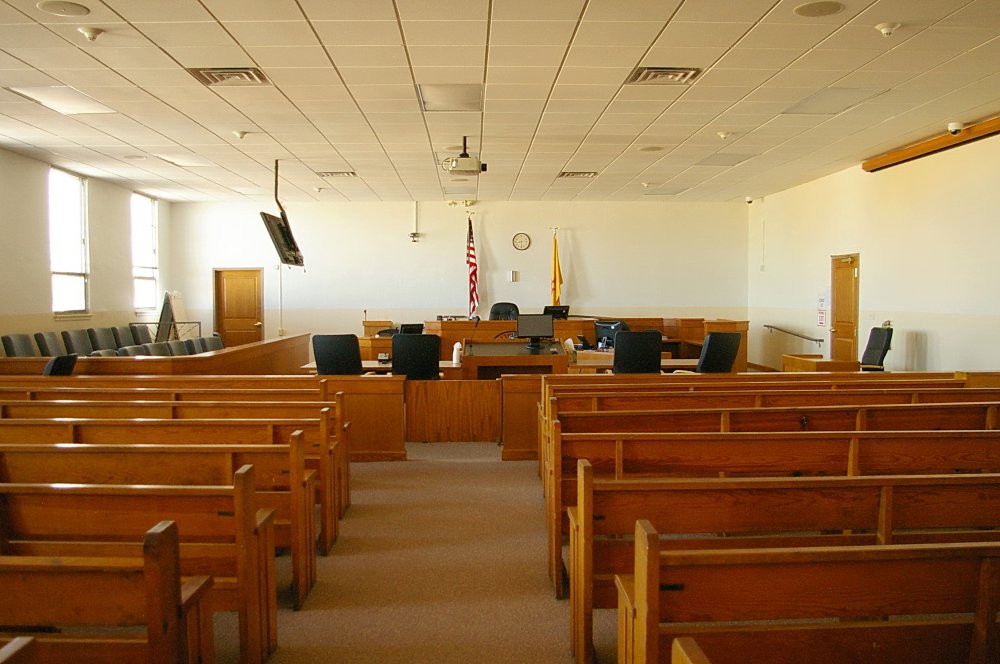 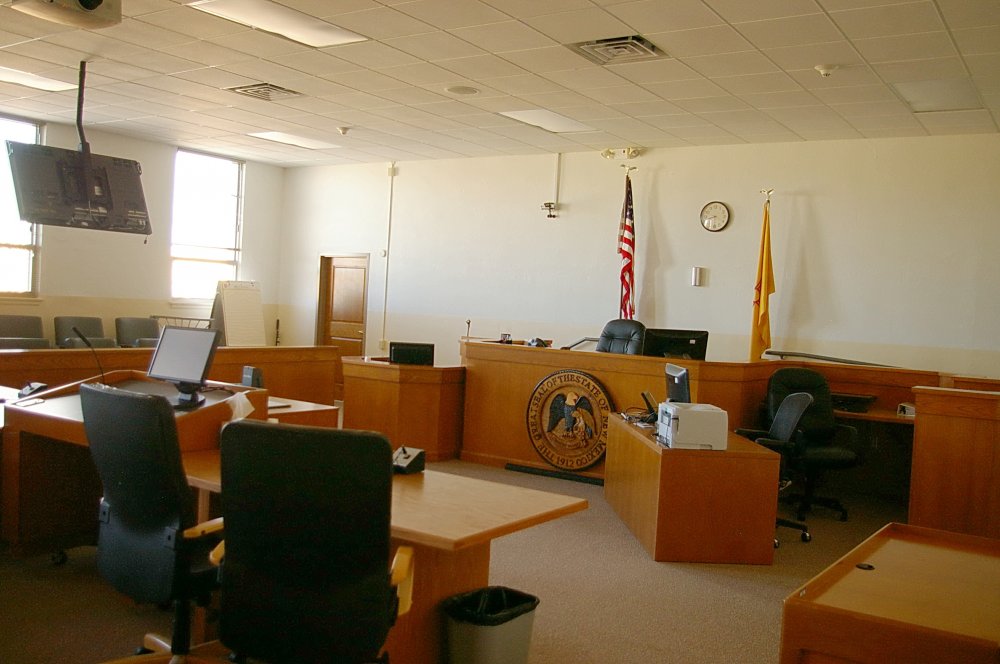 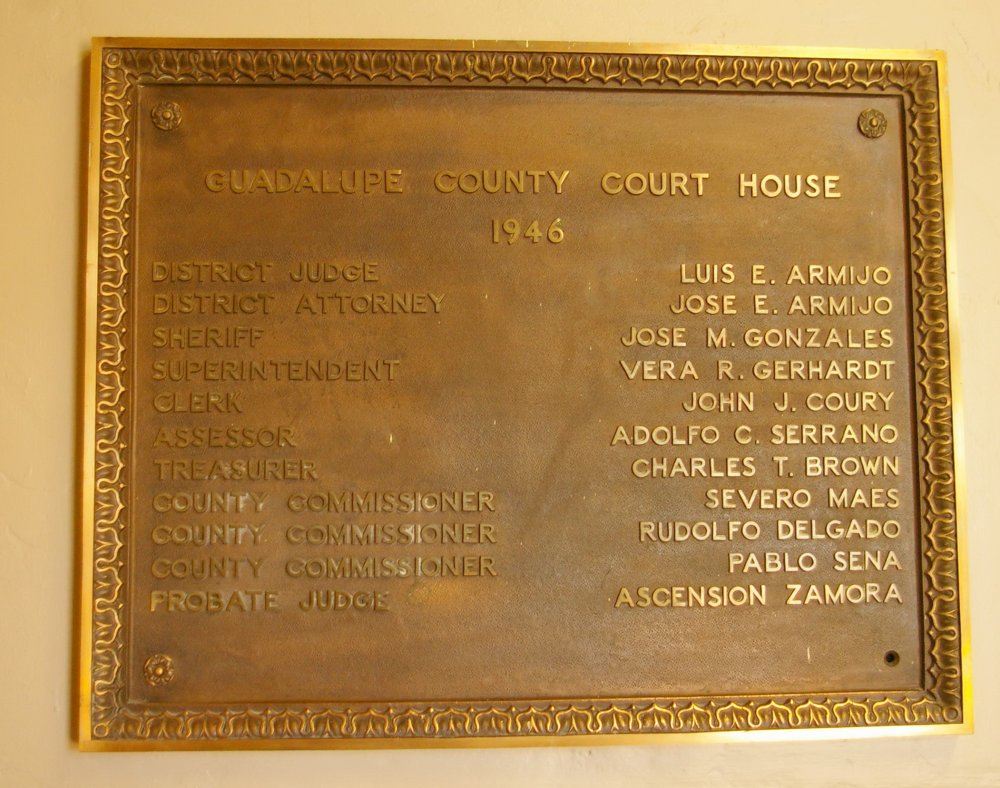 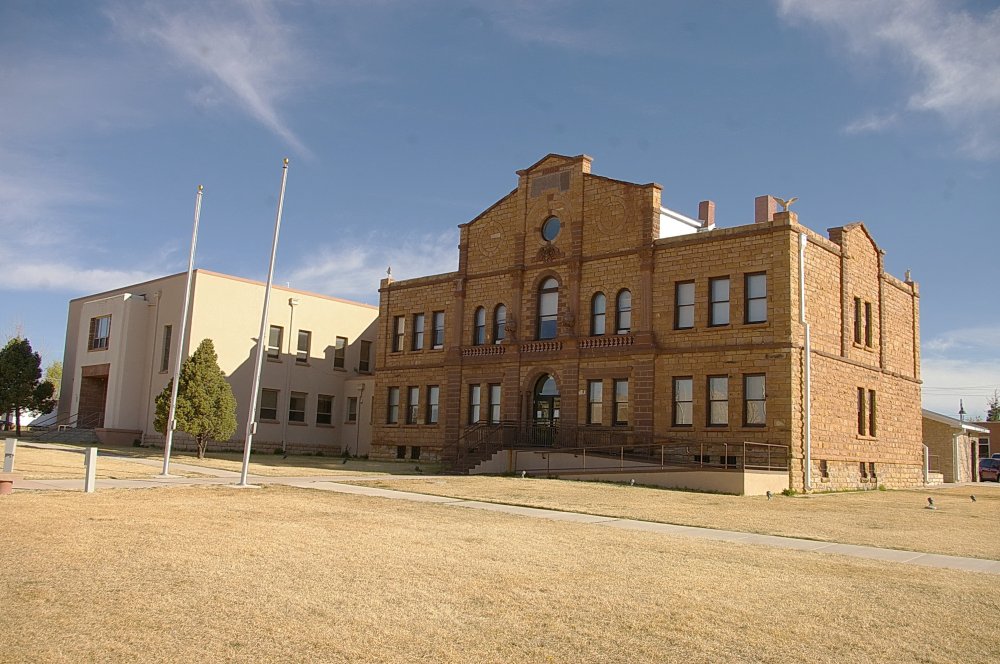 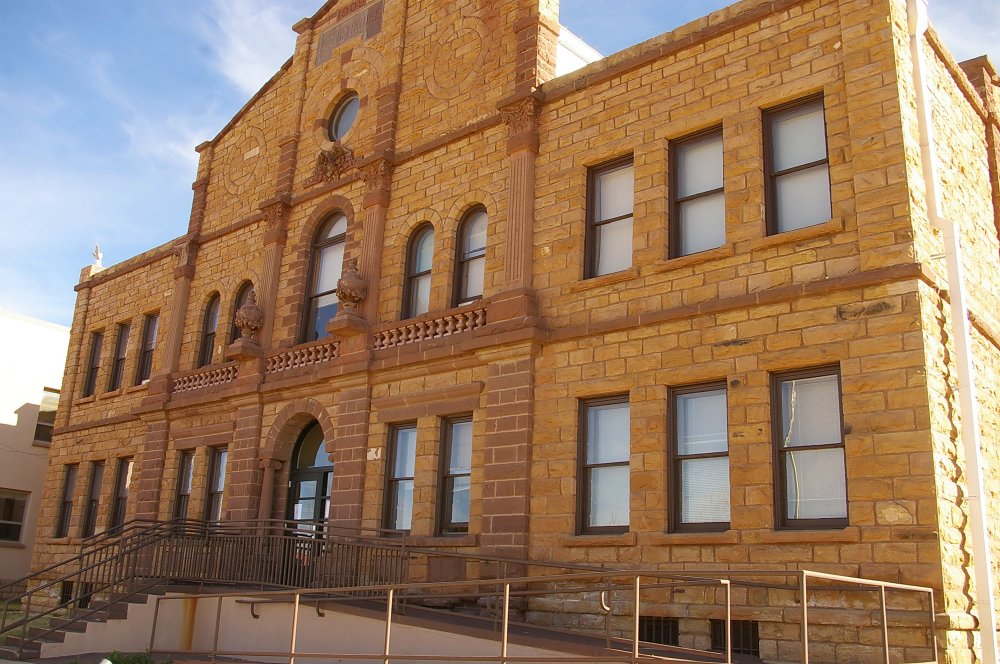 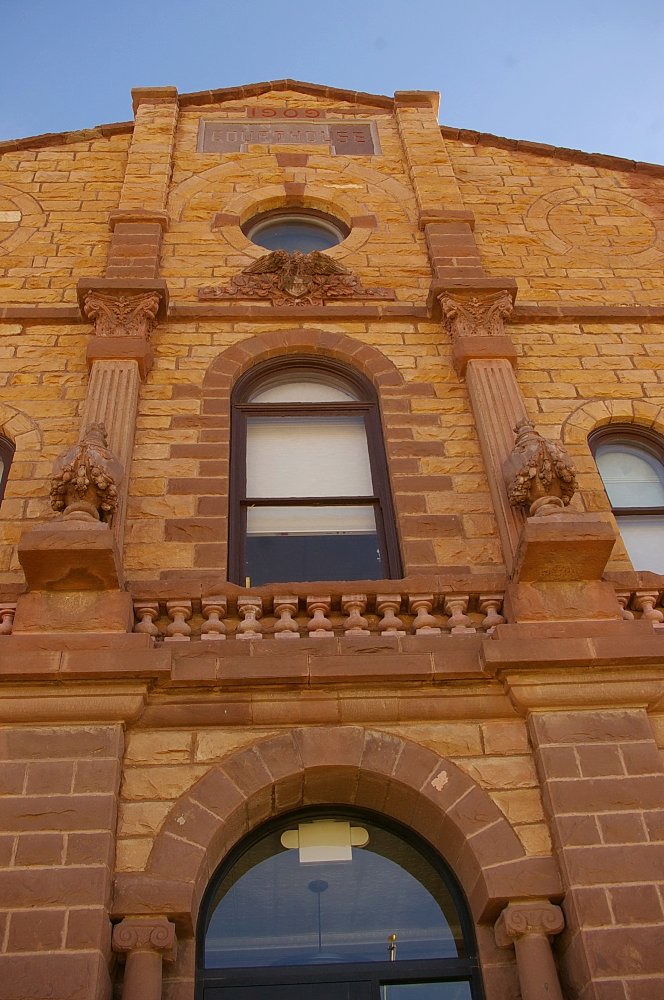 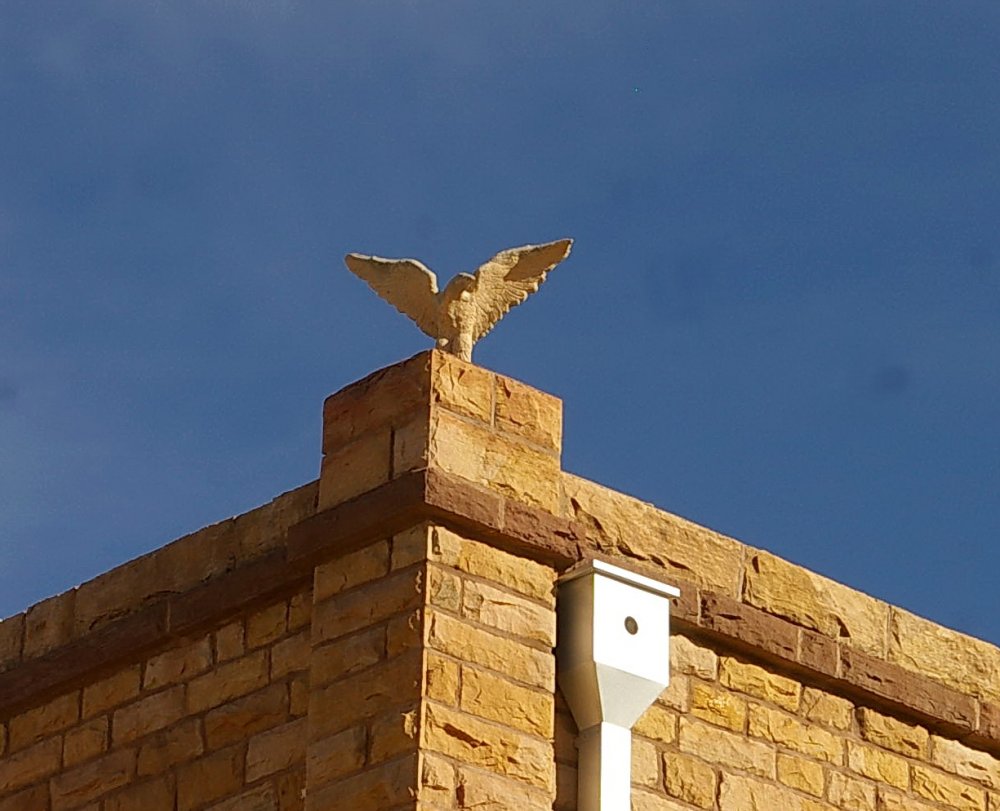 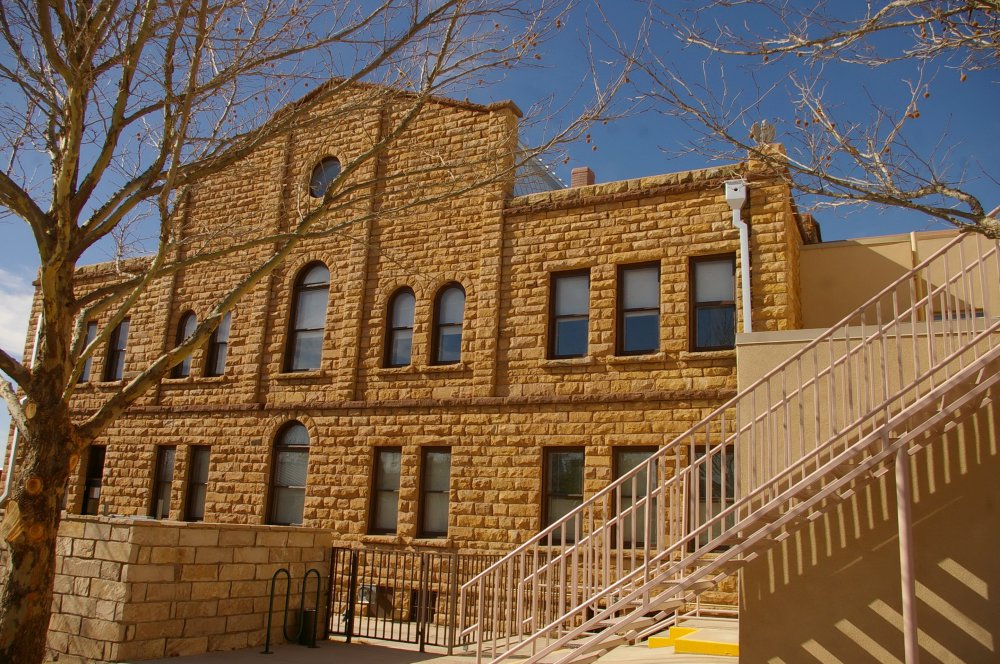 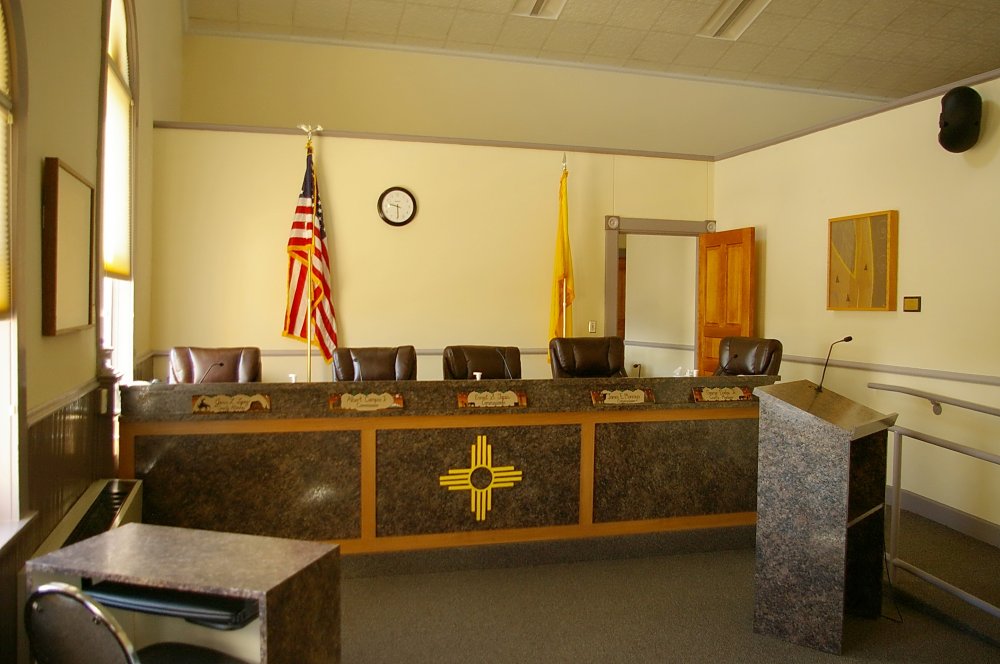 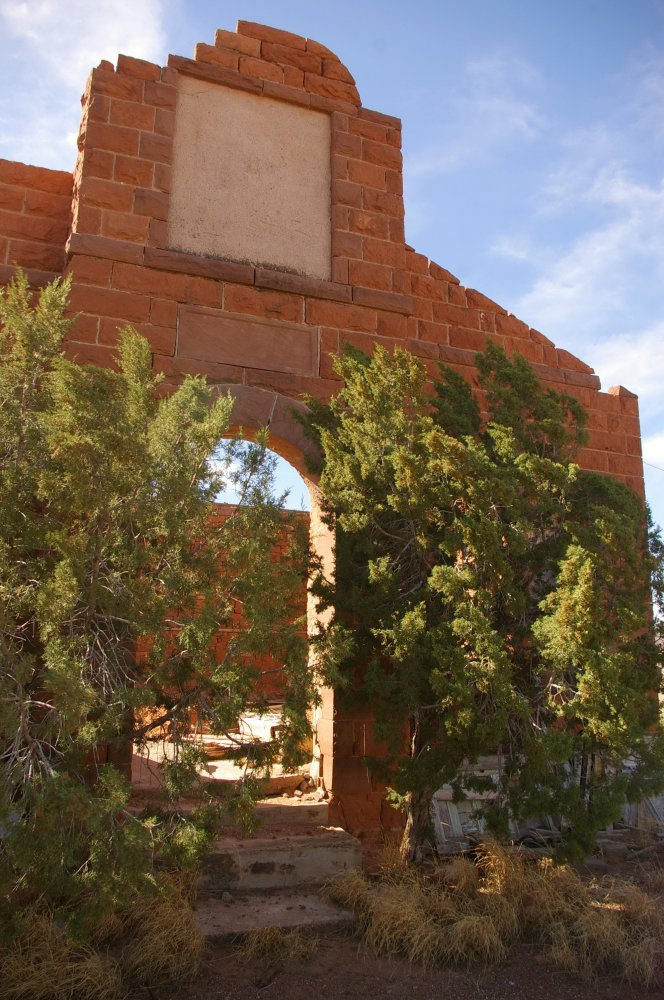