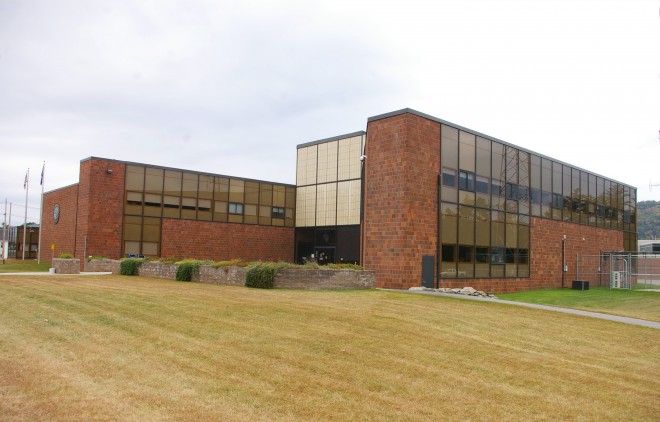 Grafton County is named for Augustus Henry Fitzroy, who was the 3rd Duke of Grafton and a Prime Minister of Great Britain. Description:  The building faces south and is a one story red colored brick structure. The building is located on landscaped grounds. The south front has a wide portico with four white colored columns rising to a pediment at the roof line. The rectangular shaped building has arched windows with green colored shutters and arched entrance on the south side. On the hipped roof is an octagonal white colored cupola with black colored dome. The building is named as “Alumni Hall”.  The building served as the courthouse until 1891.

Note:  The land was donated by Colonel Charles Johnson. The previous courthouse was Pearson Hall designed and built by Edmund Srevens in 1816. The building is located at School Street and Parish Lane opposite Haverhill Common in the center of the town. The court occupied the second story and Haverhill Academy occupied the first story. Description:  The building faces east. and is a two story red colored brick structure. The northeast corner has a large square red colored brick tower with steep roof. The east front has a projecting center section with arch entrance on the first story and with three arched windows on the second story. The center section rises to a peak at the roof line. The roof is hipped and the foundation is course stone. The building served as the courthouse until 1972 and presently stands as a residential building.