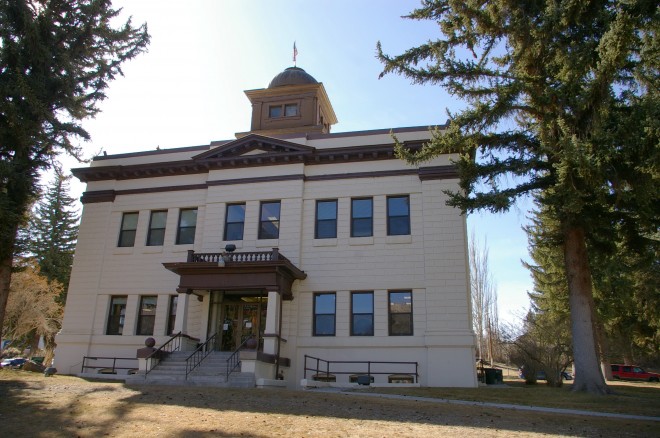 White Pine County is named for the white pine trees in the region. 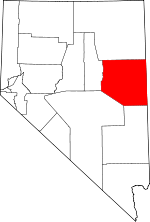 Description:  The building faces north and is a two story cream colored dressed ashlar and concrete structure. The building sits on a hilltop on landscaped grounds in the center of Ely. The north front has a porch at the central entrance supported by two pillars and with balcony on the second story. The central section projects slightly from the main building and rises to a peak at the roof line. On the center of the roof is a square brown colored cupola with copper dome. The roof is sloped. The courtroom is located on the second story. A two story jail was added to the rear in 1925.

History:  The first courthouse was a brick structure built in Hamilton at a cost of $55,000. The courthouse burned down in 1885. In 1887, the county seat was moved to Ely. The second courthouse was one story wood structure with stone foundation designed by Morrill John Curtis and constructed by Jacob C Moon in 1887 for a cost of $10,000 built on land donated by the Canton Mining Company. The building became part of the William Bee Ririe Hospital. The third and present courthouse was constructed in 1908 to 1909 at a cost of $53,083 which included an additional $3,384 for the structure’s copper dome.