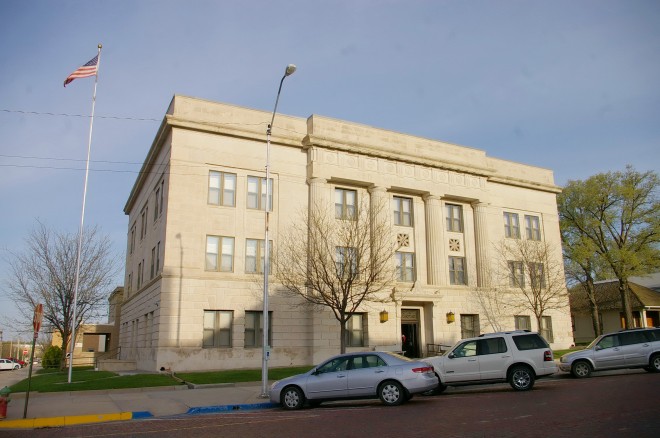 Red Willow County is named for Red Willow Creek which is a mistranslation of the Dakota Native American name “Chan-shasha Wakpala” meaning “Red Dog Creek” after the shrub which was abundant along the creek.

Description:  The building faces east and is a three story buff colored Bedford limestone and concrete structure. The rectangular shaped building is located on landscaped grounds in the center of McCook. The building is faced with Bedford limestone on three sides, and the rear or west facade is faced with gray colored brick. The first story has horizontal stonework. The east front has a central entrance on the first story. Four large fluted columns rise from the second story to the top of the third story with recessed windows. A wide cornice runs below the flat roof line. In the interior, the floorplan is T-shaped. There is a symmetric arrangement, monumental proportions, smooth stone surface, prominent columns, unadorned parapet, rusticated and ashlar finish, and such classical elements as acroteria, fluted Doric columns, rosettes, and triglyphs. Among the notable interior elements are three art glass panels on the stair landing, including a personification of the Goddess of Justice. The district courtroom is located on the east side of the third story. The courtroom has heavy moulded semi-circular pediments having cornice returns and consoles and are placed above five doors and three windows. There is attractive wood paneling on all walls, and the judge’s bench has Ionic pilasters and a pair of unusual Art Deco table lamps.  The building houses the District Court and County Court of the 11th Judicial District. The building was remodeled in 1990. The architect was Lloyd Benjamin & Associates and the contractor was Carmichael Construction.