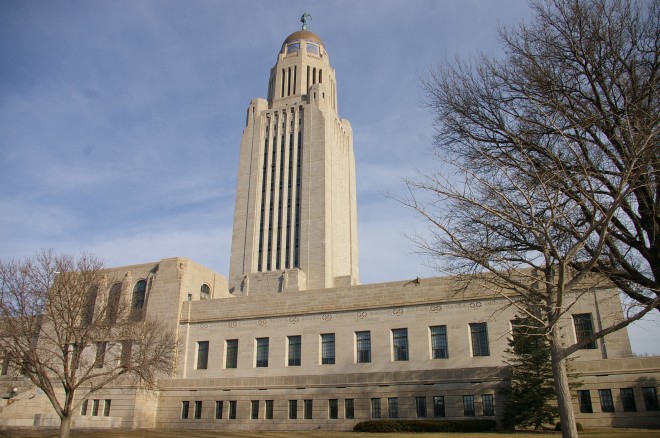 Description: The building faces west and the Supreme Court Chamber and Court of Appeals Chamber are located on the second floor in the south wing of the State Capitol. The State Capitol rises majestically from the square base and enclosed courtyards, the 400 foot ( 122 metres ) gold dome tower is topped by a 32 foot bronze statue of the Sower. The structure contains 40 varieties of limestone, marble, granite and slate as it rises above the broad flat plains. Lee Larie was the sculptor and interior murals are by Augustus Vincent Tack and Hildreth Miere. The main entrance faces west and the building measures 437 in length and width. At the western approach is a statue of Abraham Lincoln by Daniel Chester French. Inside the entrance is the Vestibule and the Great Hall which runs south to the large Rotunda in the center. The Great Hall contains mosaics telling the story of events in Nebraska history: the United States Survey; Blizzard of 1888; Tree Planting; First Railroad; Building of the Capitol and the Spirit of Nebraska. The Rotunda contains murals in a Byzantine art style and represent man engaged in labors of the Heart and Hand. 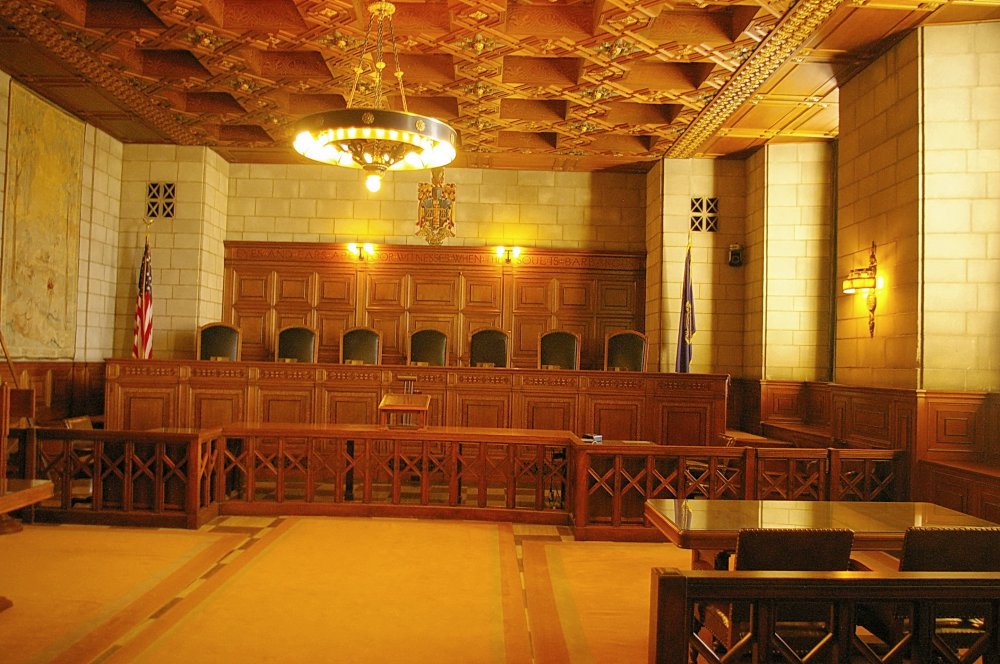 Supreme Court Chamber is located on the second floor in the south wing of the State Capitol and along the south side. There are solid walnut desks, wainscoting and railings. The chamber is dominated by American walnut woods with the Judge’s Bench along the east wall. The frieze of the walnut paneled wall behind the bench is inlaid with an inscription from Heraclitus. The 8000 piece carved walnut ceiling dominated the chamber There are three large tapestries decorating the walls. Hand woven with natural fibers and dyes, the tapestries represent the early exploration and settlement of the Louisiana Territory. 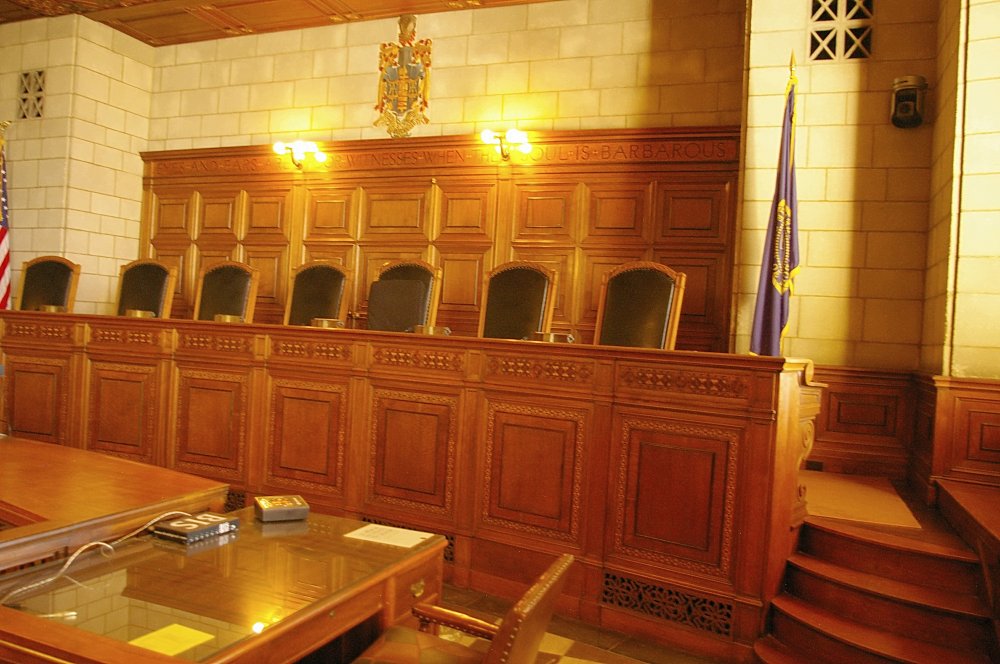 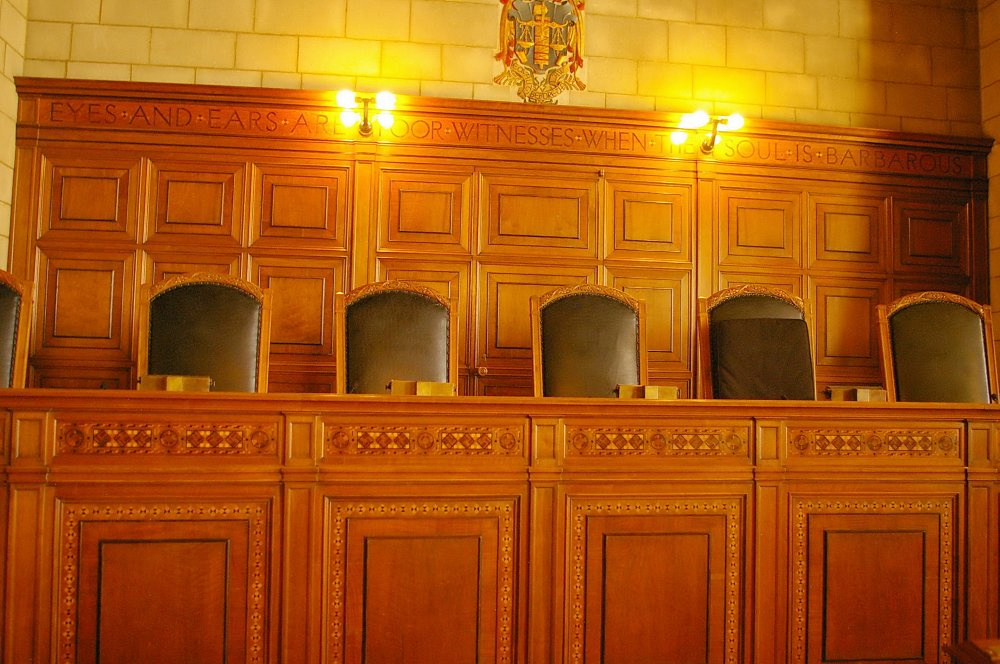 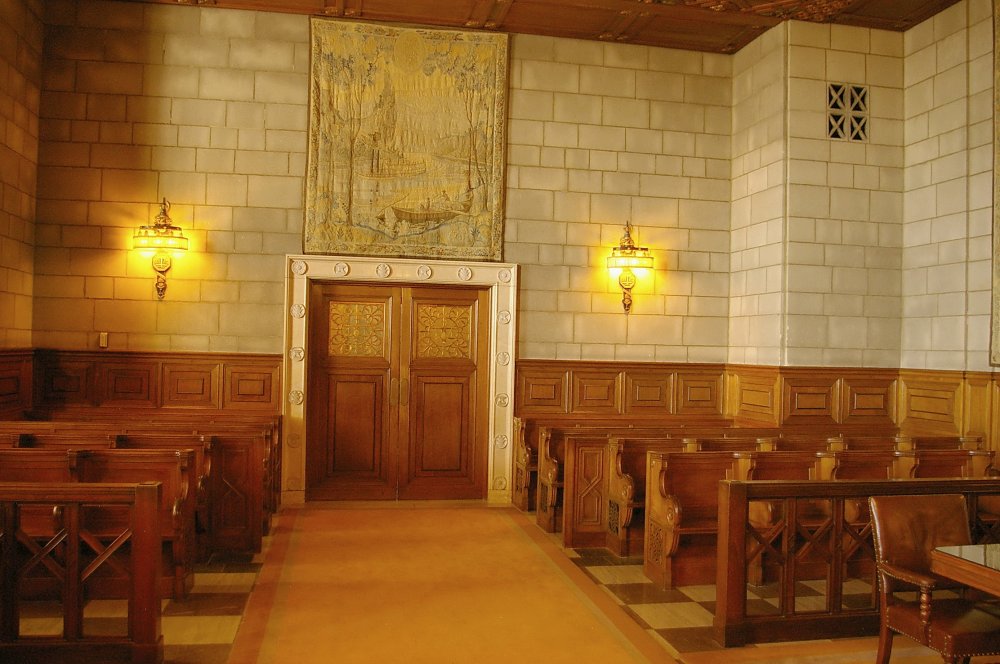 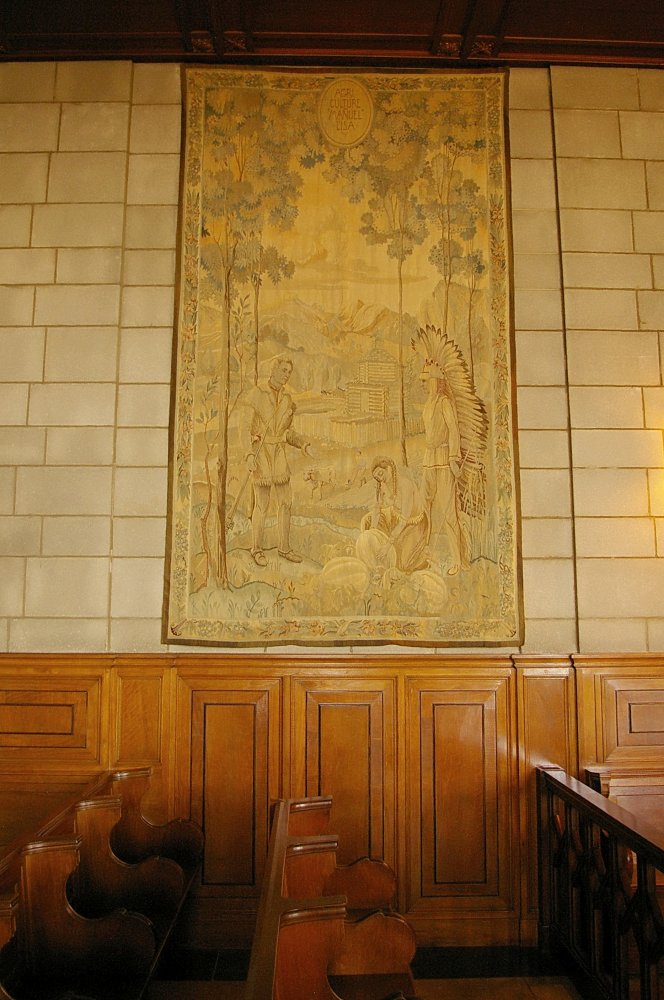 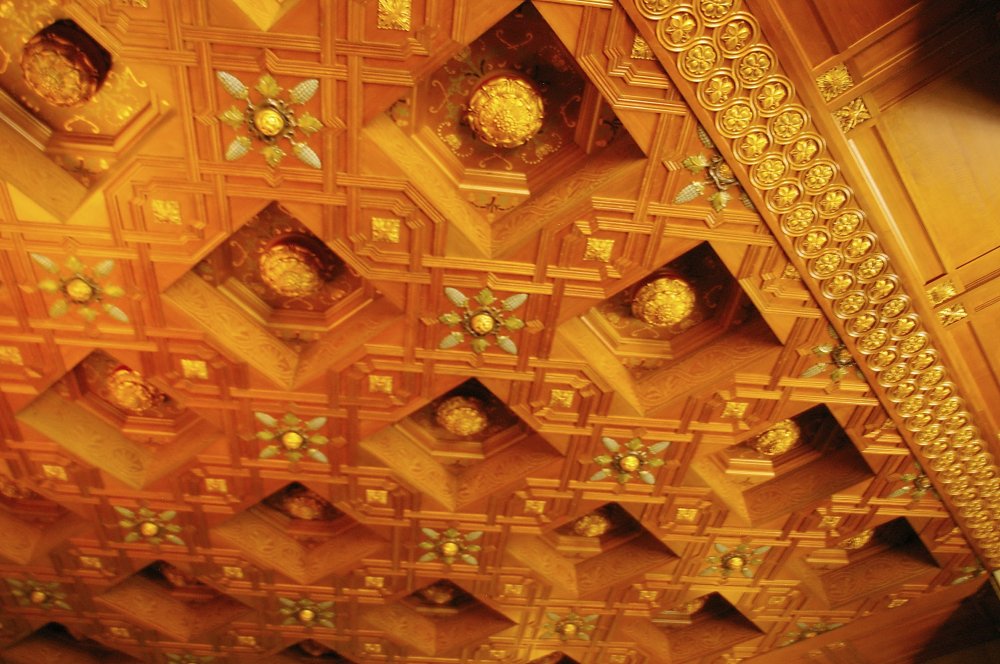 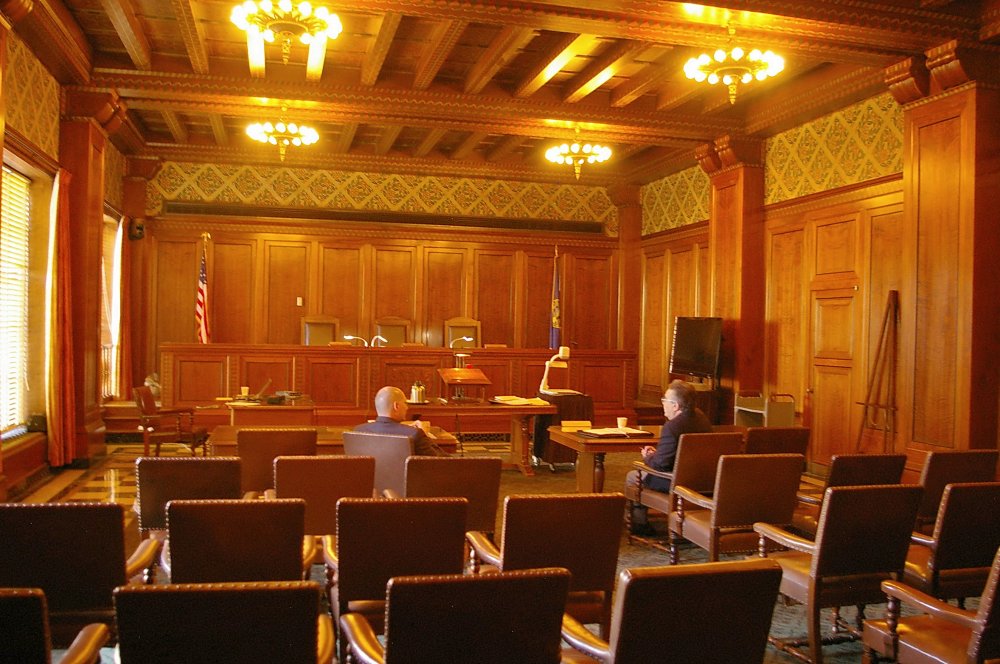 Court of Appeals Chamber is located on the second floor in the south wing of the State Capitol and along the west side down the hall from the Supreme Court Chamber. There are solid walnut desks, wainscoting and railings. The Judge’s Bench is along the north wall. The chamber has a decorative ceiling. 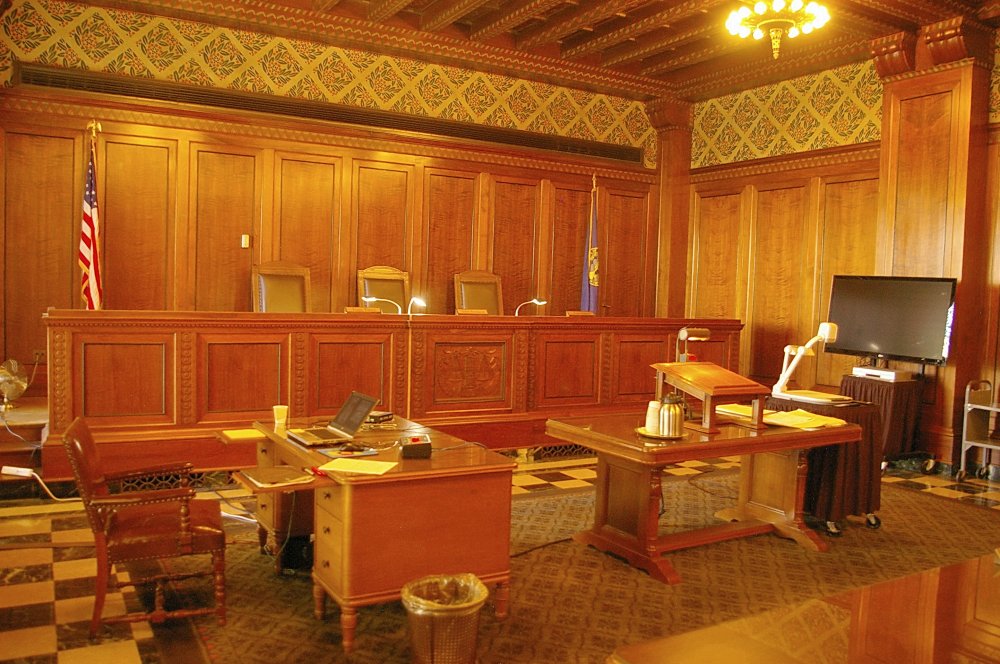 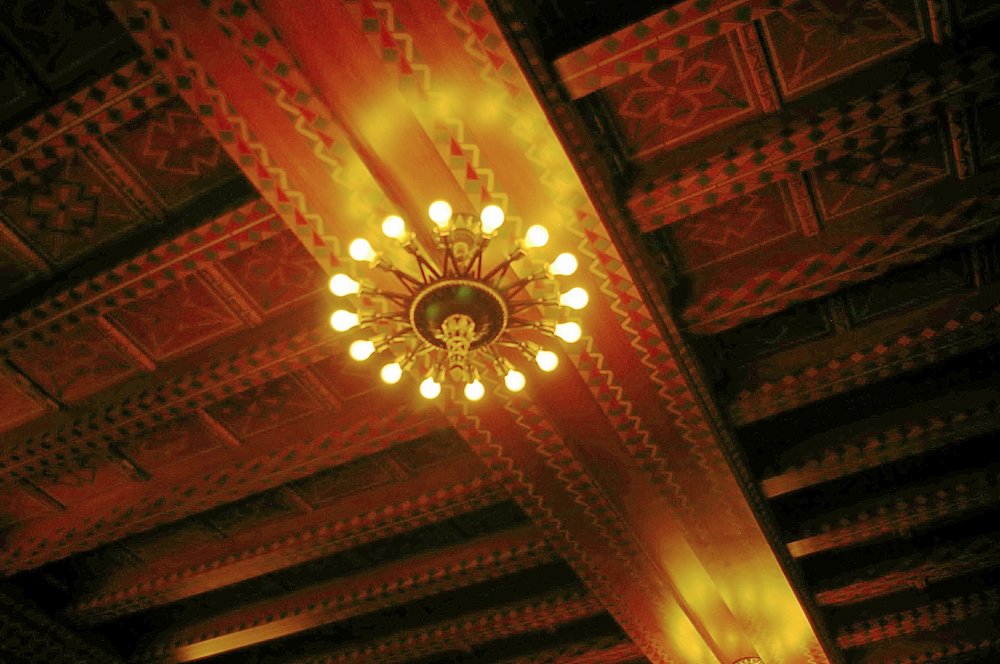 See: The Nebraska Supreme Court and Court of Appeals are located in Lancaster County.