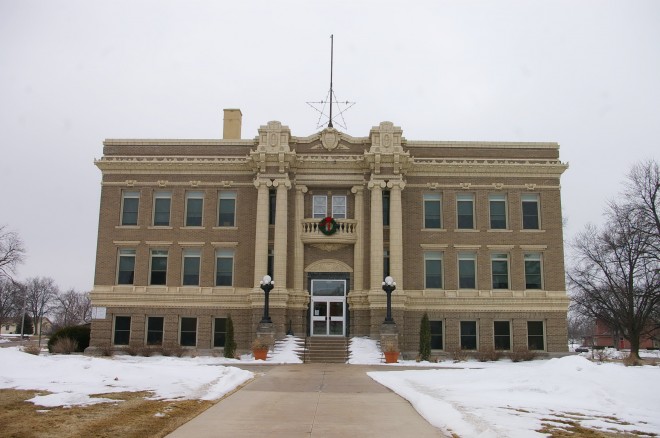 Description:  The building faces north and is a two story buff colored brick, stone and concrete structure. The building is located on the landscaped grounds of the Courthouse Square on the south side of the center of Clay Center. The north front of the rectangular shaped building has a projecting ornate north pavilion at the center with two columns rising from the first to second story on either side of the recessed center. There is a column on either side of the balcony on the second story and above is a wide header with crest. Elaborate terra cotta trim, and the cream-colored terra cotta contrasts well with the grey-tan brick. There are a rounded tympanum over the door with fine foliated detail, an attractive dark grey polished stone door surround, and large transoms over original double doors. Original metal lamp posts have four small globes around a large one and rest on brick and stone pedestals at the entry steps. A projecting horizontal cornice runs below the first story and another runs below the flat roof line. The steps on the north side lead up to the entry foyer. From the foyer are narrow steps down to the basement and steep steps up to the first story corridor. The interior has costly interior features which include mosaic tile in geometric patterns of tan, blue, black, and grey on a white ground, dark grey mopboards and trim, and marble stairs, wainscoting, and door surrounds. At the east end is the staircase leading up to the second story and the district courtroom. The public enters the courtroom at its back. The courtroom contains bold dark woodwork and heavy beams criss-cross the ceiling ending in distinctive pairs of brackets. The brackets have guttae and are united by a finely detailed swag. Other features include paneled wood wainscoting, the judge’s bench, the bar, and heavy flat lintels with dentils and long consoles at the six doors. Four exceptional wall lights of metal and glass are placed behind the judge’s bench. Leather covered double doors provide access to the courtroom. The building houses the District Court and County Court of the 10th Judicial District. On the southeast side of the courthouse is the two story brick Old Sheriff Residence.

History:  The county was created in 1855 and Sutton was selected as the county seat in 1871 when the county was organized. The first county meeting was held at the home of Alexander Campbell. In 1879. The county seat was moved to Clay Center. The first courthouse was a two story frame structure built by W D Young in 1887 to 1888. The building was demolished when the second and present courthouse was constructed in 1917 to 1918 at a cost of $81,585. 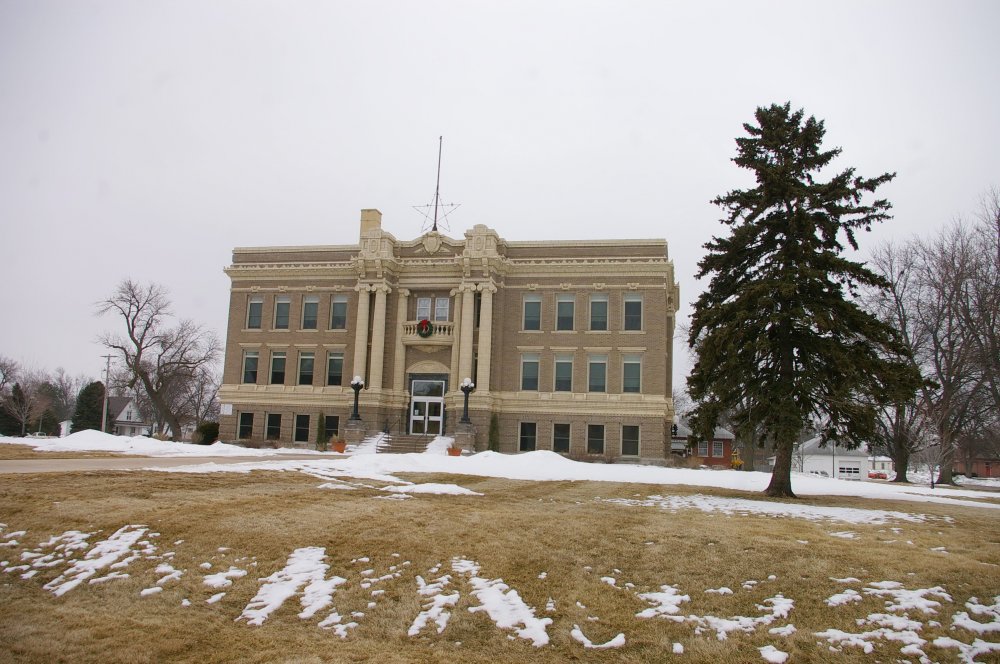 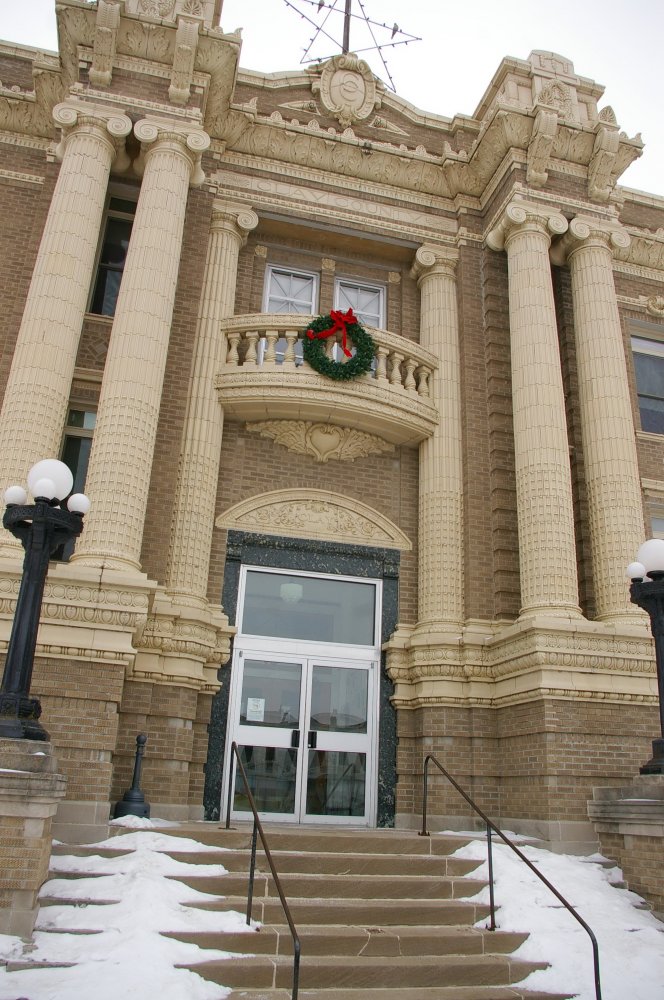 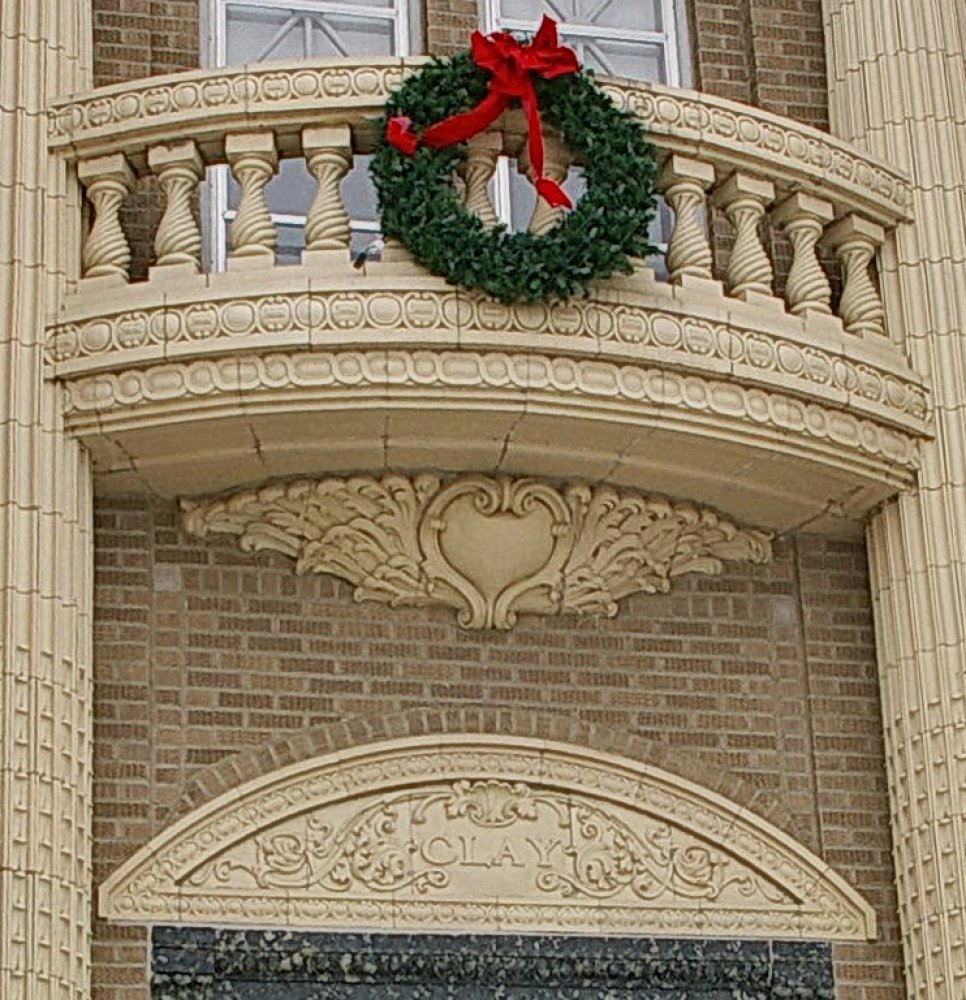 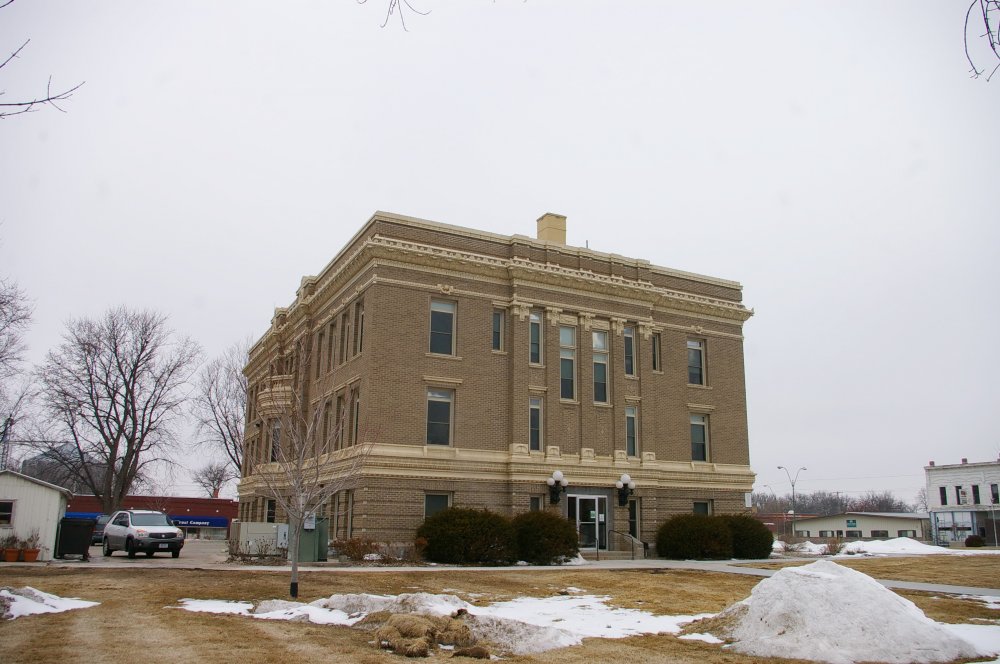 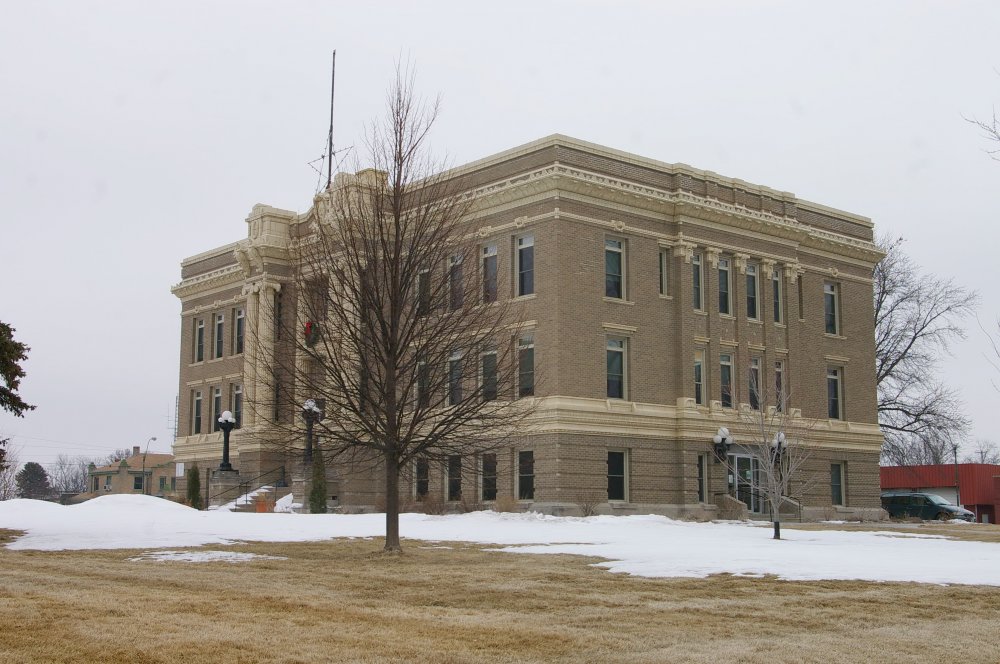 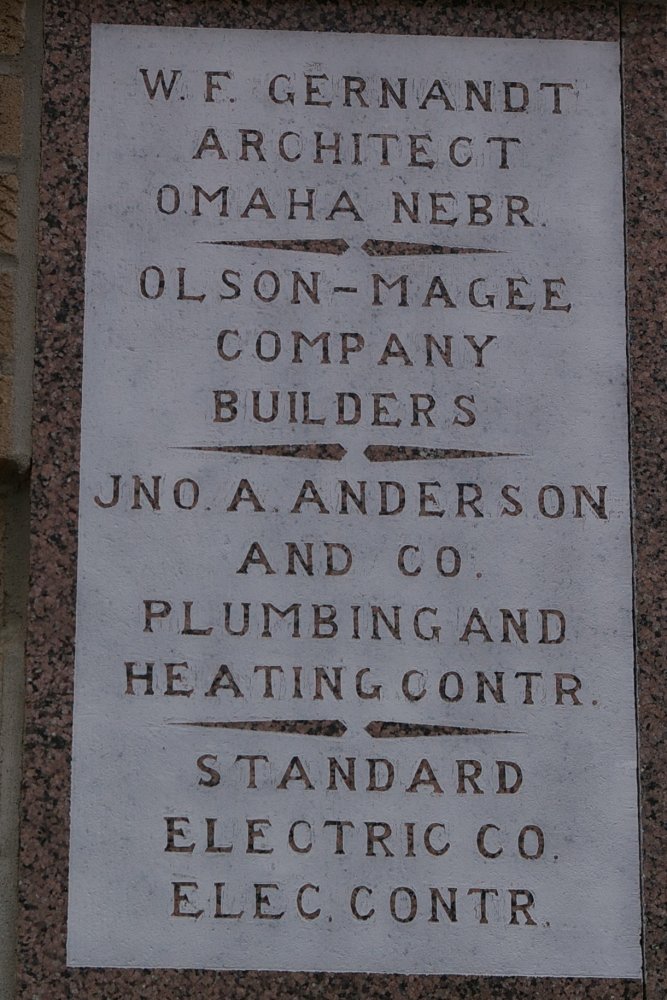 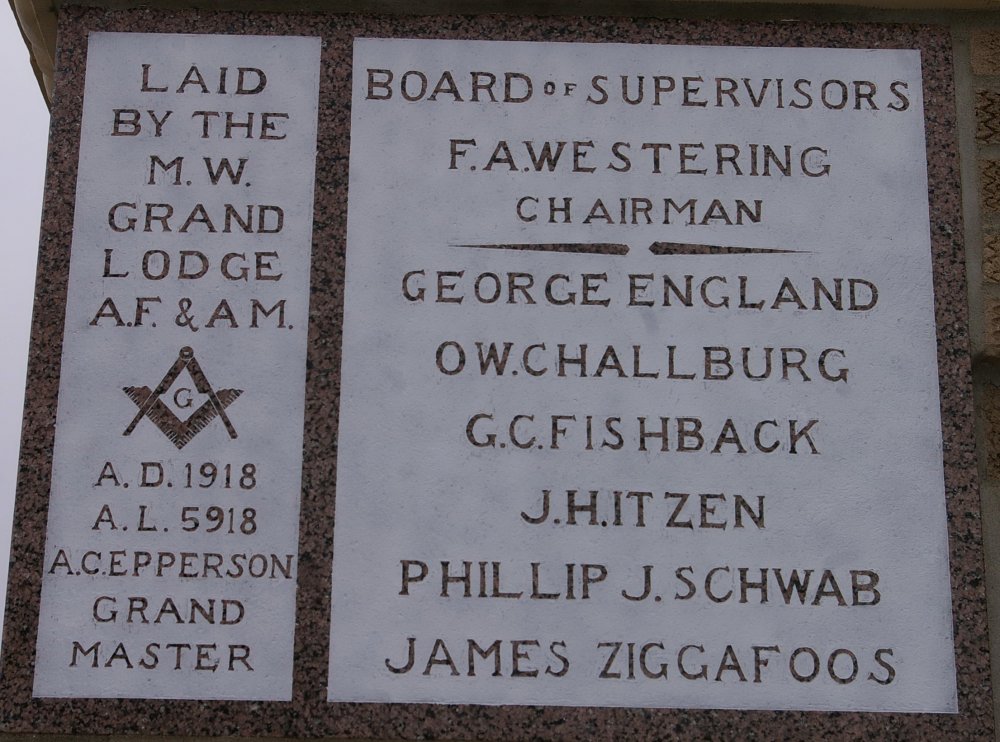 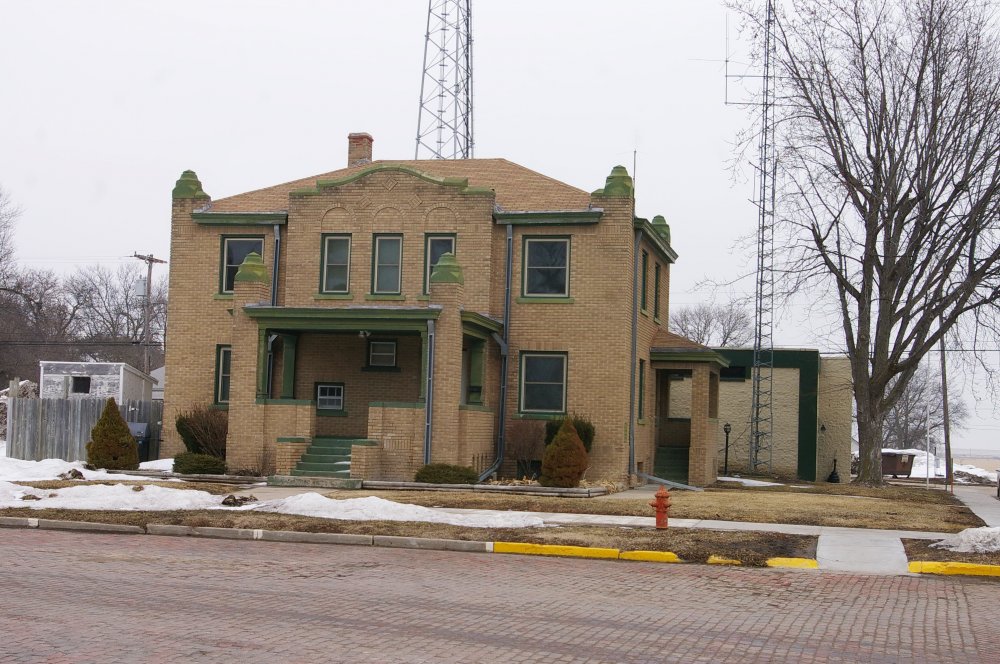