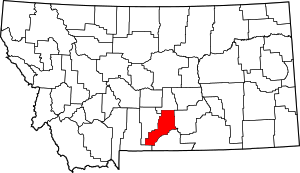 Architect:  Warren A Dedrick of Billings

Description:  The building faces south and is a three story red colored brick structure. The building is located on landscaped grounds in the center of Columbus. The south front has an extending portico supported by two large columns which rise from the first story to the top of the second story. Above is a wide header with three windows on the third story. A wide cornice runs between the second and third stories. The roof line is flat. In the interior, the courtroom is located on the west side of the second story. The building houses the County District Court of the 22nd Judicial District and County Justice Court. On the west side is the Old Sheriff Residence.

History:  The county was created in 1913 and Columbus was selected as the county seat. The county offices occupied a building on Pike Avenue. The first and present courthouse was constructed in 1919 to 1921.