Deer Lodge County is named for Deer Lodge Valley,  which was named for the Native American name “lodge of the White-tailed Deer”, or a lick where deer came in droves. 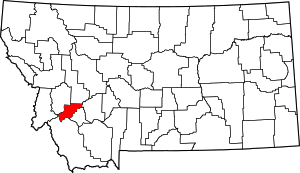 Description:  The building faces north and is a three story buff dressed colored sandstone and concrete structure. The building is located on landscaped grounds of a low hill in the center of Anaconda. The north front has a projecting center section with arched doorway on the first story, large arched window on the second story and pediment above the roof line. The first story windows are arched. The east and west wings project from the main building. On the center of the roof rises a two-tired square dome with small cupola at the top. The interior has a rotunda. The third story contains the large courtroom on the east, with jury rooms and judge’s chambers. A spiral staircase joins the office of the Clerk of the Court on the second story beneath the courtroom with the courtroom above. The building houses the County District Court of the 3rd Judicial District and County Justice Court.