St. Charles County is named for St. Charles Borromeo, who was an Italian saint and cardinal of the Roman Catholic Church. 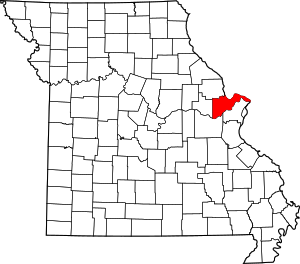 Description:  The building faces east and is a three story Carthage and Bedford stone structure. The building sits on the crest of Clerks Hill. The east front has a portico with three arches on the first story and four columns rising from the second story to the top of the third story and with a large header above at the roof line. A similar portico is on the west side. Description:  The building faces east and is a four story red colored brick, stone and concrete structure. The building has small windows and descends down a slope. A horizontal band of stone runs along the top of the first story. The central entrance on the east side is recessed. The roof line is flat. Description:  The building faces east and is a five story concrete and glass structure. The east front is rounded with columns rising to the roof line and glass windows between.