Newton County is named for John Newton, who was a sergeant who served under General Francis Marion in the Revolutionary War. 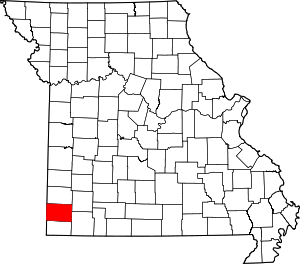 Description: The building faces west and is a three story Carthage stone and concrete structure. The building is located on landscaped grounds in the center of Neosho. The north and south wings are lower. The center section has a stone framed entrance with small canopy above. The windows are vertical and the roof line is flat. The courtroom is located on the second story.This was a Work Projects Administration project. The landscape architect was M W Woodward. The building was renovated in 1996 to 1998. The contractor was Roger Hulsey Enterprises.