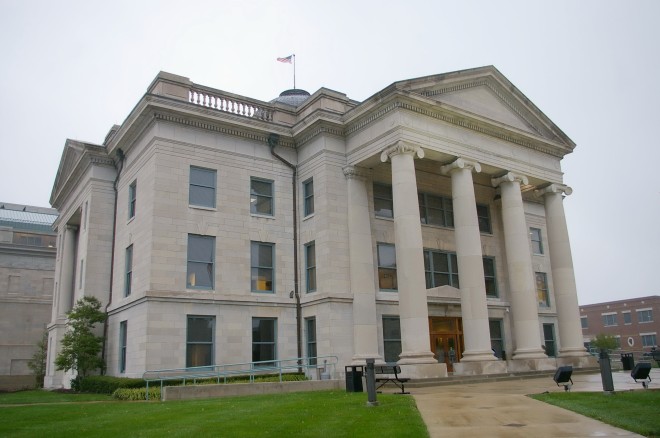 Contractor:  J A McCarter of Macon.

Description: The building faces south and is a three story gray colored stone and concrete structure. The building is located on the landscaped grounds of the Courthouse Square in the center of Columbia. The south front has a large portico supported by four large columns rising to a pediment at the roof line. The center section projects from the main building. A projecting stone cornice runs below the second story windows. A balustrade follows the roof line. On the center of the building rises a round dome with green colored roof. In 1990 to 1992, a rectangular shaped County Courthouse Annex was constructed on the north side. The building was expanded in 2007 to 2008 adding two stories and connecting the building to the courthouse with a glass walkway. The building is five stories and has a projecting center section on the north side with long glass panel windows and pediment at the top. The roof line is flat. The building houses the County Circuit Court of the 13th Judicial Circuit. The architect was Butler, Rosenbury & Partners of Springfield and the contractor was United HRB Contractors. S M Wilson & Company of St. Louis was the project manager.

History:  The county was created in 1820 and Smithton was selected as the county seat in 1821. The county seat was moved to Columbia in the same year. The court met in private homes until the first courthouse, a two story brick structure was built in 1824 to 1828. The second courthouse was a two story structure and was designed by W M Winter and constructed in 1846 under the supervision of William Jewell at a cost of $15,000. The columns of this courthouse aligned with the columns on Academic Hall at the University of Missouri several blocks south. The third and present courthouse was constructed in 1906 to 1909 at a cost of $100,000. The cost of the 2007 to 2008 extension to the County Courthouse Annex was $8,500,000. Description: The building faces west and is a three story red colored brick and concrete structure. The building is located on landscaped grounds in the center of Columbia and faces onto a plaza opposite the courthouse. The square building has an extended entrance section on the west side with circular section with green colored dome and glass paneled wall with entrance on the first story. The roof line is flat.