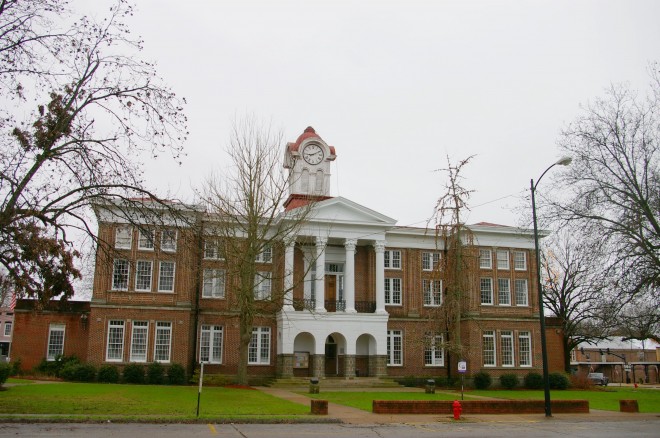 Marshall County is named for John Marshall, who was the United States Chief Justice of the Supreme Court.

Description:  The building faces north and is a three story red colored brick structure. The building is located on the landscaped grounds of Courthouse Square in the center of Hoily Springs. The north front has a central portico with three arches on the first story and four white colored columns rising to a pediment at the roof line. There is a balcony on the second story. There is a similar portico on the south side. The east and west ends of the building, project from the main building. On the center of the roof is a high white colored wood cupola with clock and red colored roof at the top. The large courtroom is located at the center of the second story. The east and west wings were added in 1925 to 1926. The architect was Noah Webster Overstreet. The building was renovated in 1967. The architect was Hugh H Rather.

Note:  The courthouse is similar to the Lafayette County courthouse. Prolonged skirmishes from 1862 to 1864 during the Civil War caused the burning and destruction of all buildings on the east side of the square, and considerable damage on the north and west sides, culminating in the incineration of the courthouse constructed in 1837 by Union soldiers in 1864.

History:  The first courthouse was a two story clapboard structure built in 1838. The building burned on August 27, 1864. The cost of construction of the second and present courthouse in 1870 was $25,000.