Harrison County is named for William H Harrison, who was the ninth President of the United States of America. 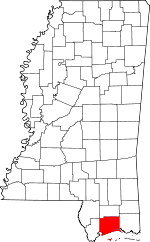 Description:  The building faces east and is a three story concrete structure. The building is located on landscaped grounds in the center of Gulfport. The first story is recessed with vertical pillars dividing horizontal windows. The entrance is in the center area. Above is tan colored siding with an overhanging roof with wide tan colored edge. The roof line is flat. The building houses the First District County Circuit Court of the 2nd Judicial District, County Chancery Court and County Court. Description:  The building faces east and is a two story red colored brick and concrete structure. The building is located along the west side of the courthouse in the center of Gulfport. The east front has a slightly projecting center section which rises above the roof line and has two red colored brick pillars rising to a header above the second story and with recessed entrance on the first story. The north and south corners has small square towers with framed entrances on the first story. The windows are vertical and the roof is flat. Ther building houses the County Justice Court – 1sr District.

See:  The Second Judicial District Courthouse is located in Biloxi.