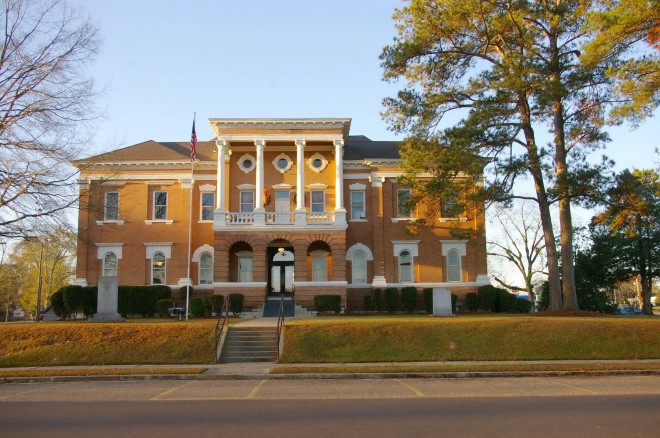 Covington County is named for Leonard Wailes Covington, who was a United States Army Brigadier General and a member of the United States House of  Representatives.

Description:  The building faces northeast and is a three story red colored brick,  stone and concrete structure. The building is located on landscaped grounds in the center of Collins. The northeast front has a projecting central porch with three arches and recessed entrance on the first story and four columns rising to a roof at the roof line. There are three circular windows above the second story windows. Stone is used for the window trim. A horizontal belt runs below the roof line. The roof is hipped. The interior has a central corridor on the first story with marble wainscoting and a terrazzo floor. Twin staircases ascending to the second story where the courtroom is located. The courtroom occupies the central drum and there is an upper seating gallery that forms part of the third story. The room is a dramatic oval space with semi-circular side walls and a high, pressed metal ceiling. Much of the furniture is original. The building houses the County Circuit Court of the 13th Judicial District and County Justice Court. The building was renovated in 1982. The architect was William Ward Easley, Jr. and the contractor was Sullivan Enterprises Inc. Restoration was completed in 2005. The architect was McCleskey Associates and the contractor was B W Sullivan Building Contractors, Inc. 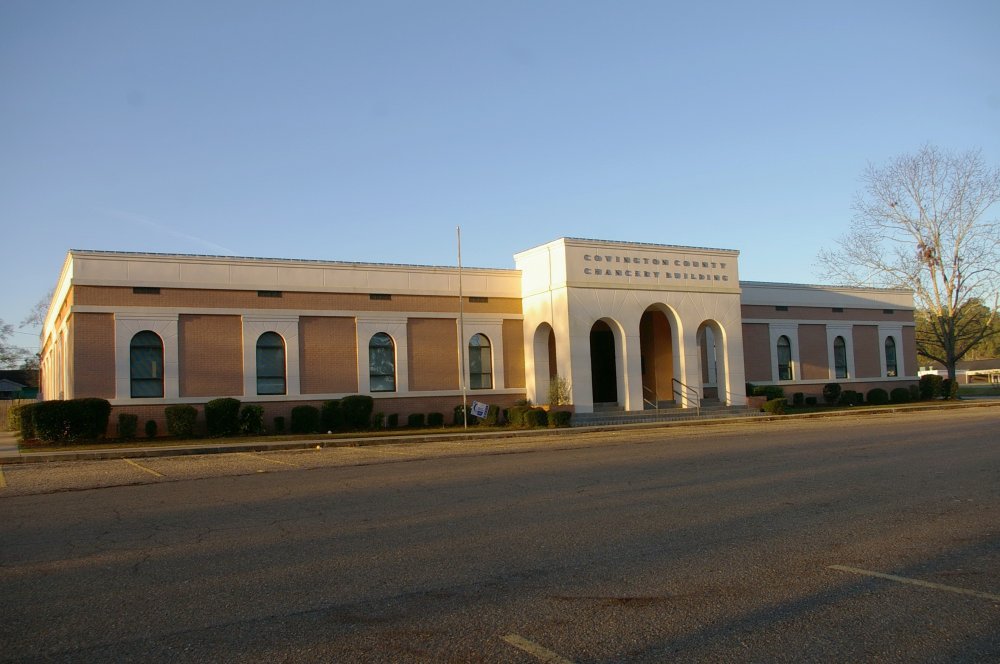 Description:  The building faces northeast and is a one story buff colored brick and concrete structure. The building is located on landscaped grounds in the center of Collins to the south of the courthouse. The northeast front has a central porch with three arches and a recessed entrance, The windows are arched and framed. A narrow horizontal belt runs along the top of the windows, and a wide belt runs along the flat roof line. The building houses the County Chancery Court and Couth Youth Court.

History:  The county was created in 1819 and Speedtown was selected as the county seat. The first court met under a magnolia tree in Speedtown and then at the home of William Speed. In the early 1820’s a crude log structure was built serving as the first courthouse. In 1929, the county seat was moved to Williamsburg and in 1830, Neil Mathieson of Dry Creek built the second courthouse which was a wood frame structure and which burned in 1853. The court met at the Olive Branch Masonic Lodge in Williamsburg until the third courthouse, a two story frame structure was built by Neil Mathieson. On December 5, 1904, the courthouse burned and in 1906, the county seat was moved to Collins. The fourth and present courthouse was constructed in 1907 at a cost of $117,000. 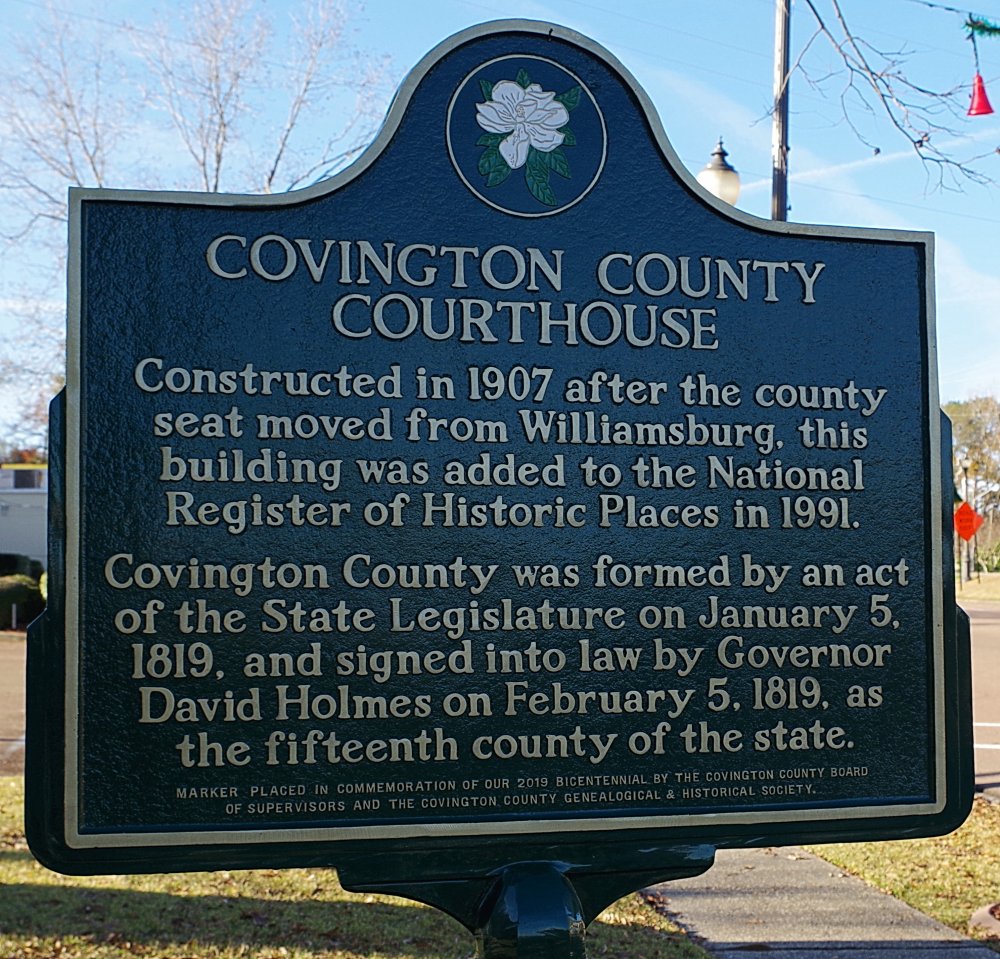 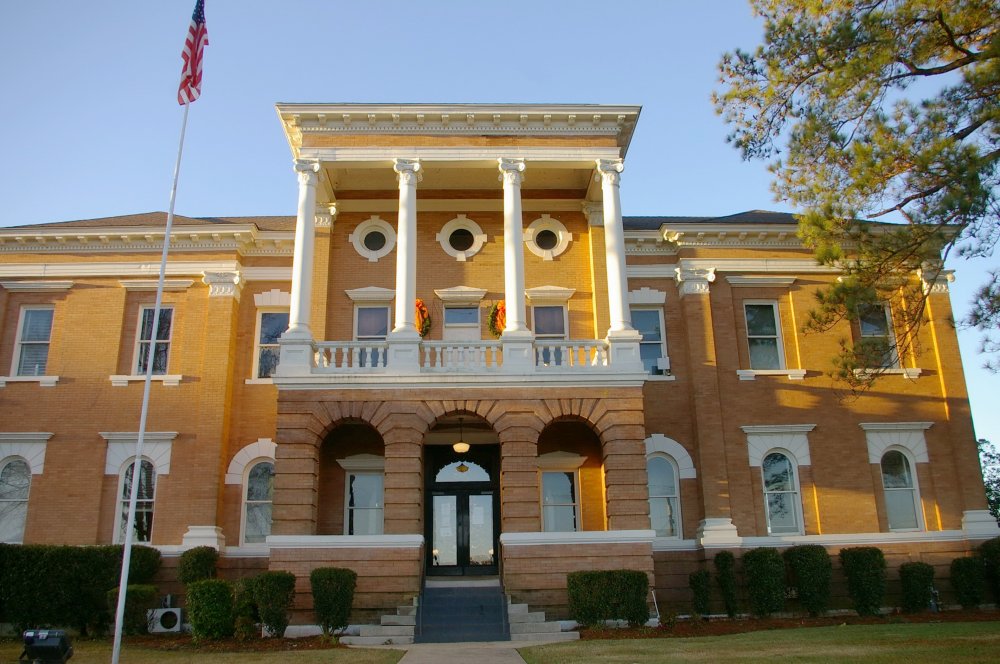 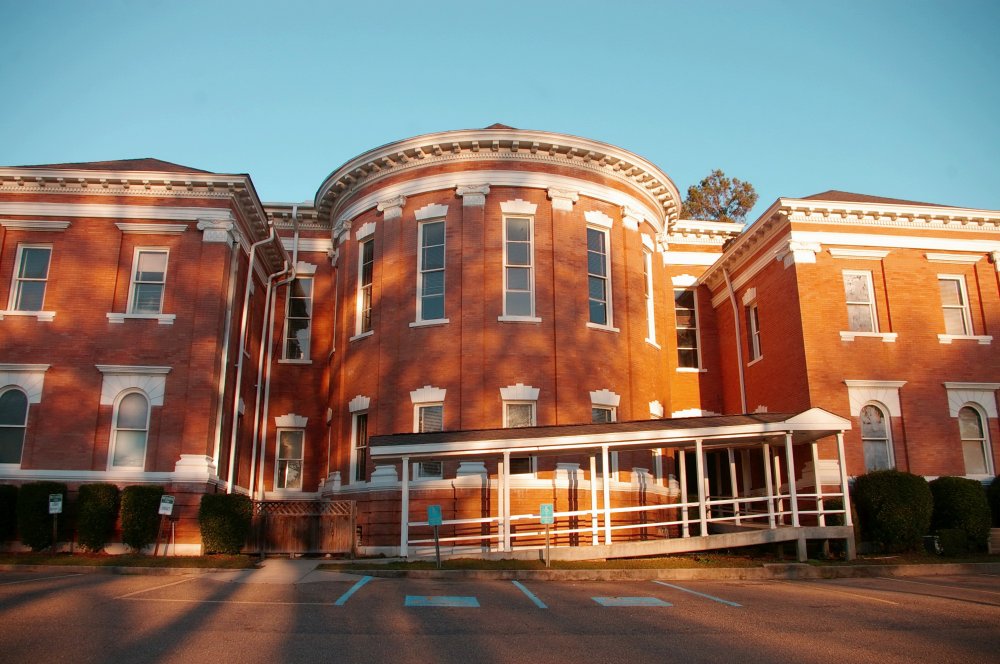 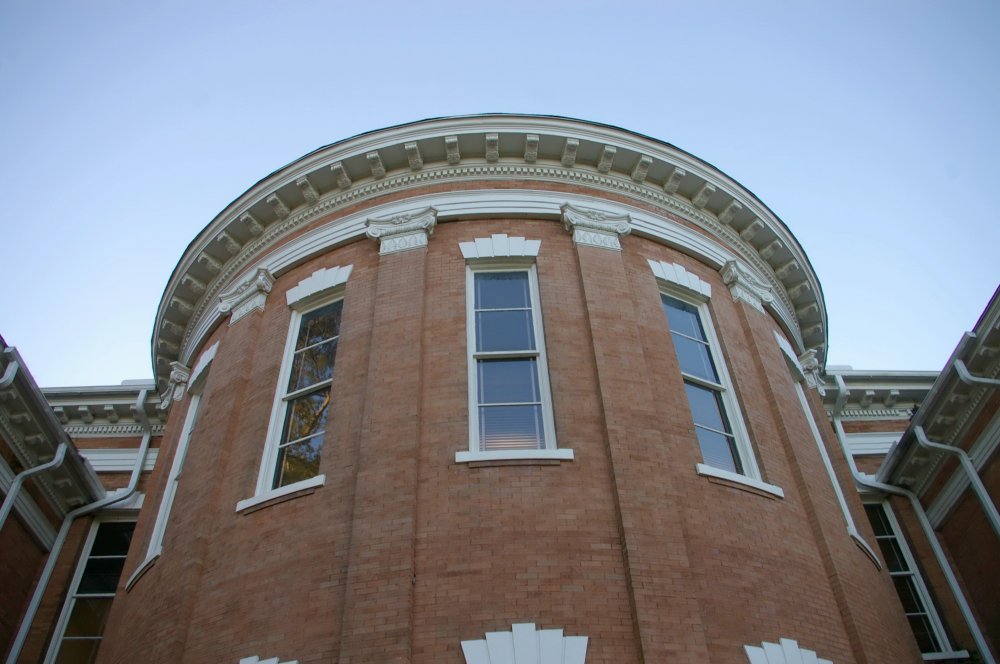 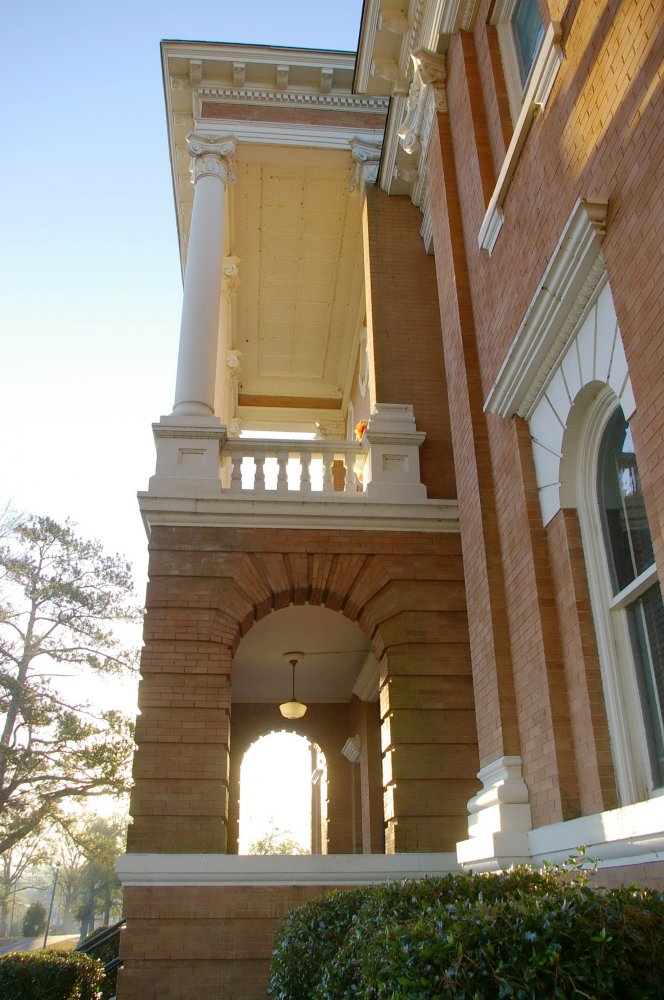 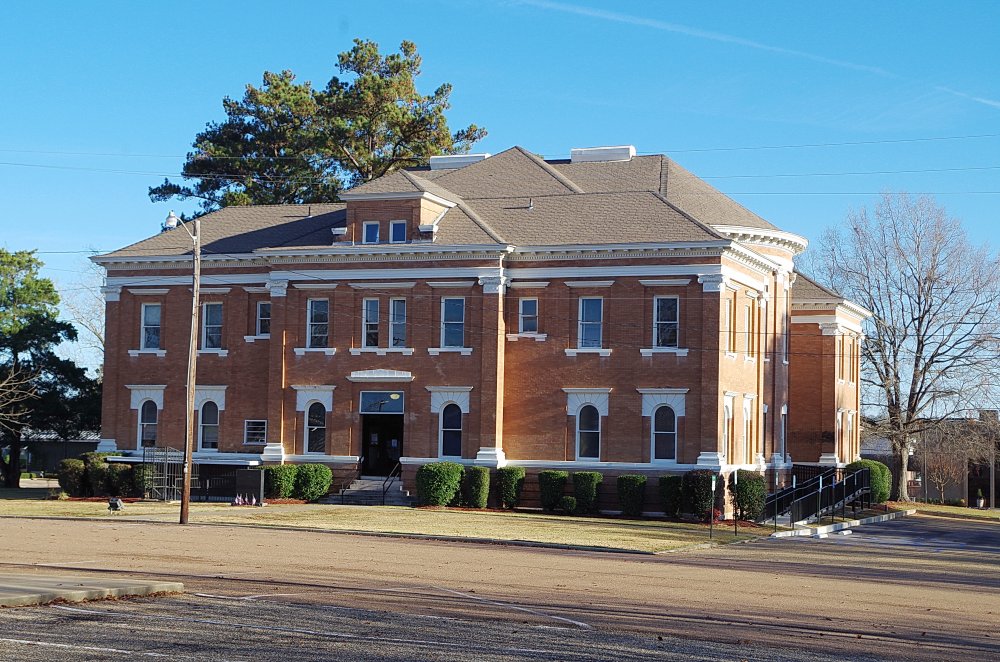 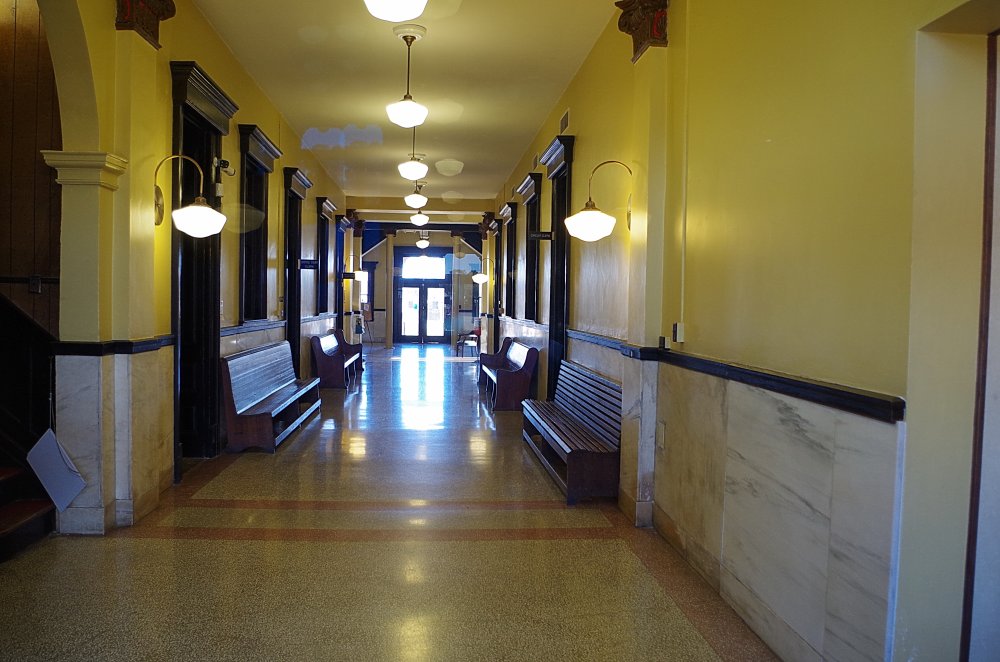 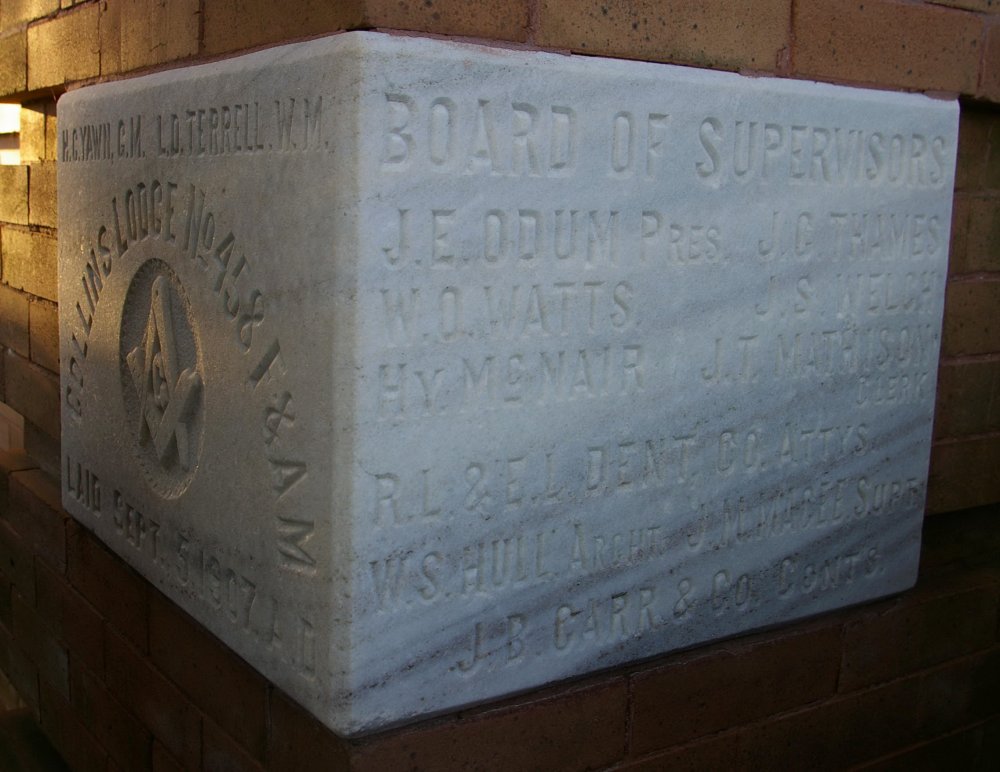