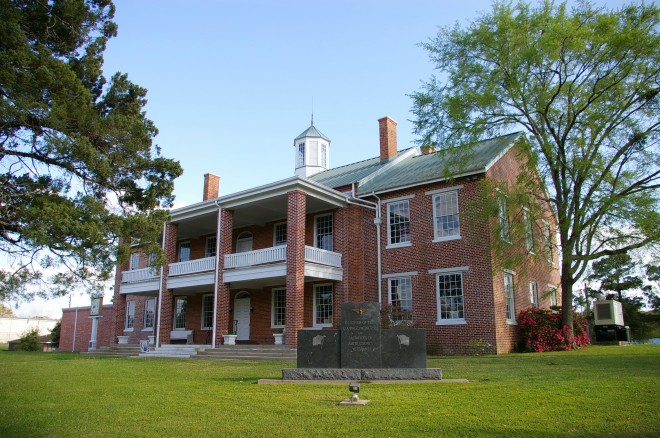 Amite County is named for the Amite River which flows through the county and whose name means “friendly”.

Description:  The building faces north and is a two story red colored brick and wood structure. The building is located on spacious landscaped grounds in the center of Liberty. The north front has a large porch on the first and second stories. There is a sloped green colored roof. On the center of the roof is a small octagonal white colored cupola with green colored roof. The courtroom is located on the second story. The building houses the County Circuit Court of the 6th Judicial District, County Chancery Court, Couth Youth Court and County Justice Court. On the east side and west side are new wings. The additions were constructed in 1937 to 1938 under the Works Project Administration. A further addition was made in 1969. An addition was constructed in 1974 and 1975. The architect was Ragland Watkins Architects of McComb and the contractor was Carter and Mullings, Inc. of Columbia. The building was renovated in 1999. The architect was Watkins & Cox and the contractor was Paul Jackson & Son Inc. of Brookhaven. The building was further renovated in 2015. The architect was Waycaster Associates of Natchez and the contractor was Smith Painting & Contracting, Inc. of Hattiesburg.