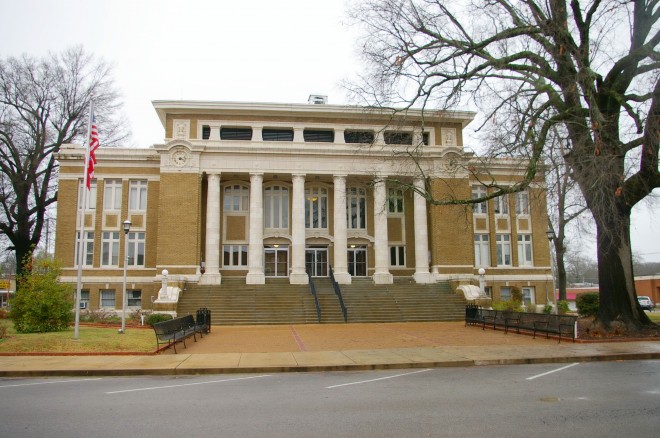 Alcorn County is named for James L Alcorn, who was a Governor of the State of Mississippi.

Description:  The building faces south and is a three story buff colored brick and concrete structure. The building is located on landscaped grounds in the center of Coriinth. The south front façade is hexastyle in antis and has a large porch with six Doric columns on Tuscan shafts rising to a wide header which has six short columns rising to the roof line. An adaptation of a full Classical entablature spans the width of the block beneath the attic windows, with segmental-arched hoods above clock faces at the corners. There are three entrances with large windows above on the second story. There are lower east and west wings. White colored horizontal bands run below the first story windows and above the second story windows. The roof is hipped. The courtroom is located on the north side of the second story. The building houses the County Circuit Court of the 1st Judicial District, County Youth Court and County Justice Court.

Description:  The building faces south and is a two story red colored brick and concrete structure. The building is located in the center of the city to the west of the courthouse. The stepped brick parapet with corner cyma blocks is capped with a marble coping and contains a rectangular marble panel with centered shield panel, above a dentil led marble cornice, brick architrave and marble frieze. Monumental brick piers with Doric capitals, brick shafts and marble and granite bases divide window and door bays. A pair of monumental columns with Ionic capitals, Tuscan shafts and Ionic bases flank the central entrance. The building houses the County Chancery Court. The building was formerly the Security Guarantee Bank.

History:  The county was created in 1870 and Corinth was selected as the county seat. The first courthouse was designed by Alfred Zucher and built in 1880. The courthouse burned in 1917. The second and present courthouse was constructed in 1918 to 1919. 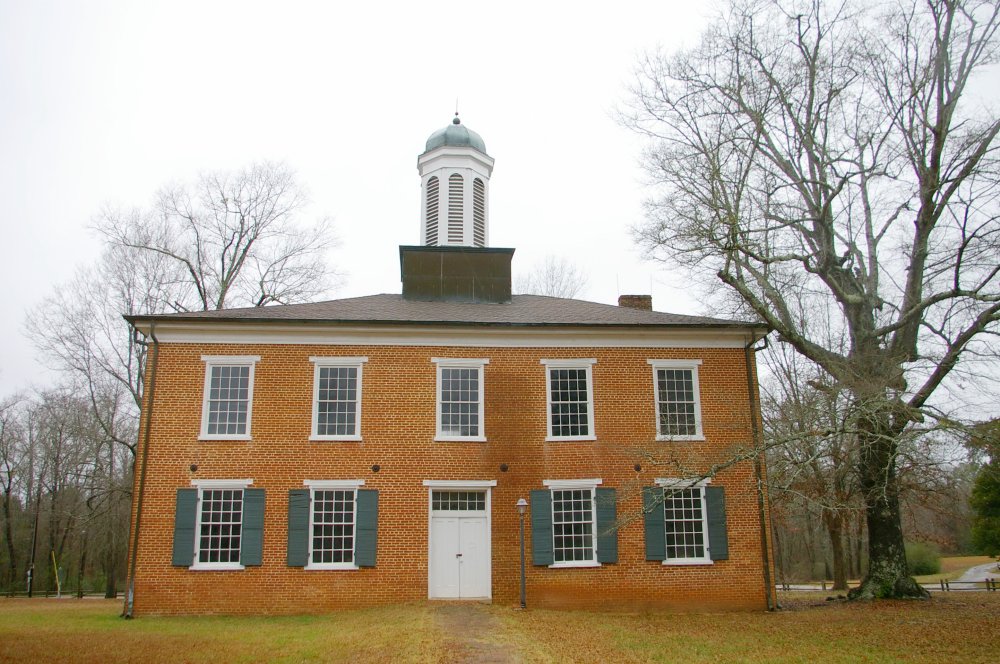 Note:  By 1852, Tishomingo County needed a new courthouse to replace the one built in 1841. J J Blythe was hired to build the new brick courthouse. The county agreed to pay exactly $6,798. Blythe’s contract stated that the building have outer walls to be 18 inches thick and inner walls to be 13 inches thick,  The dimensions of the building were to be 40 feet by 56 feet with two stories topped by an octagonal shaped belfry.  The bricks were hand-made and hand-hewn. The foundation was made of hand-cut stone. At the completion in 1854, the extra sum of $200 was spend on copper gutters, $25 for a lightening rod and $26.72 for a carpet in the courtroom.

Note:  J J Blythe also built a similar but larger courthouse in Itwamba County in 1852 to 1854. 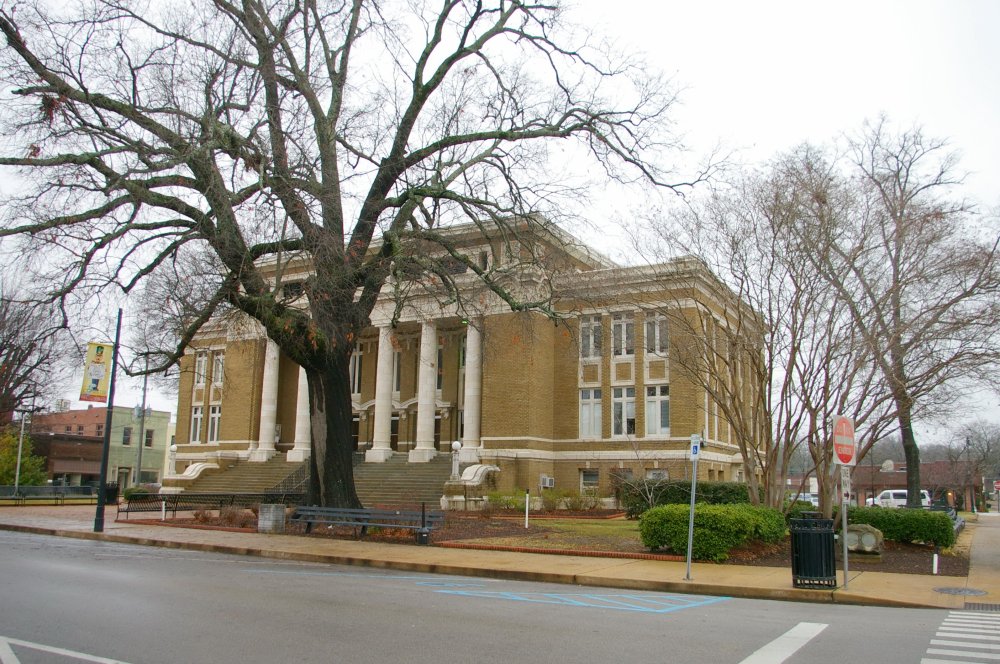 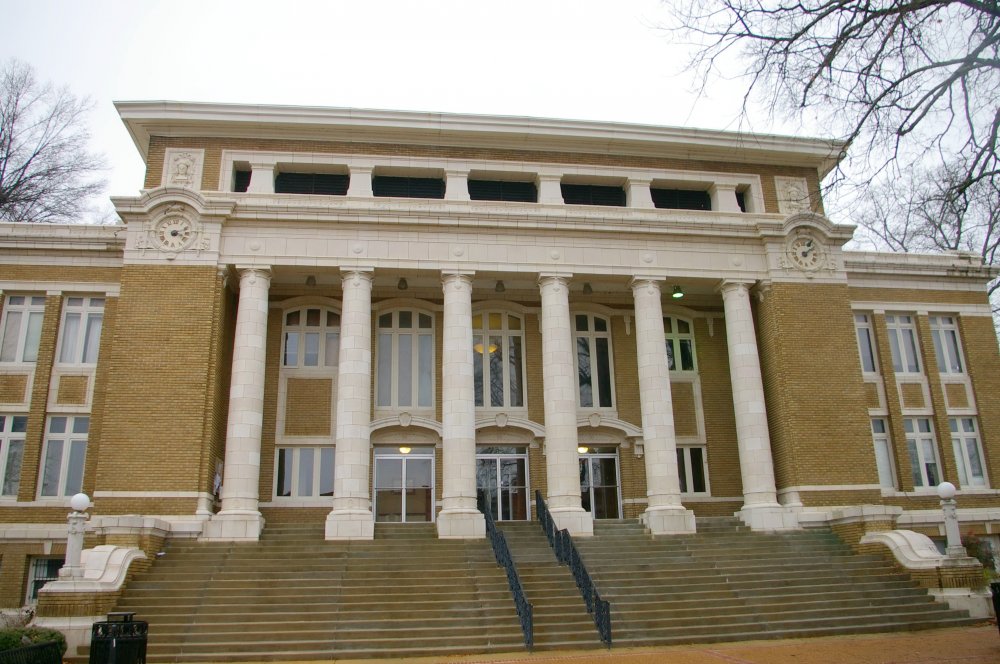 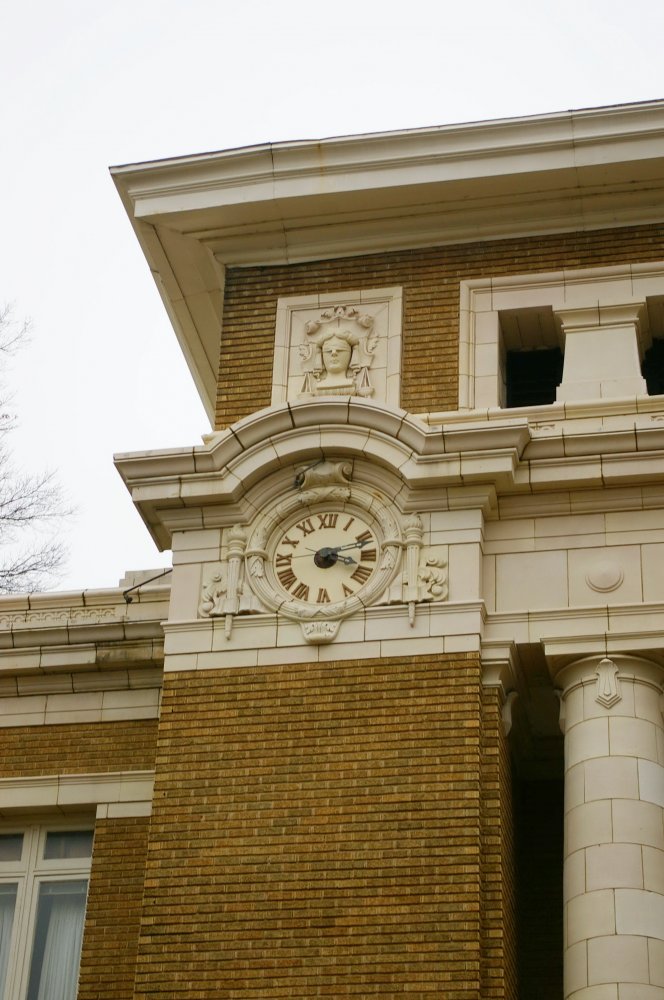 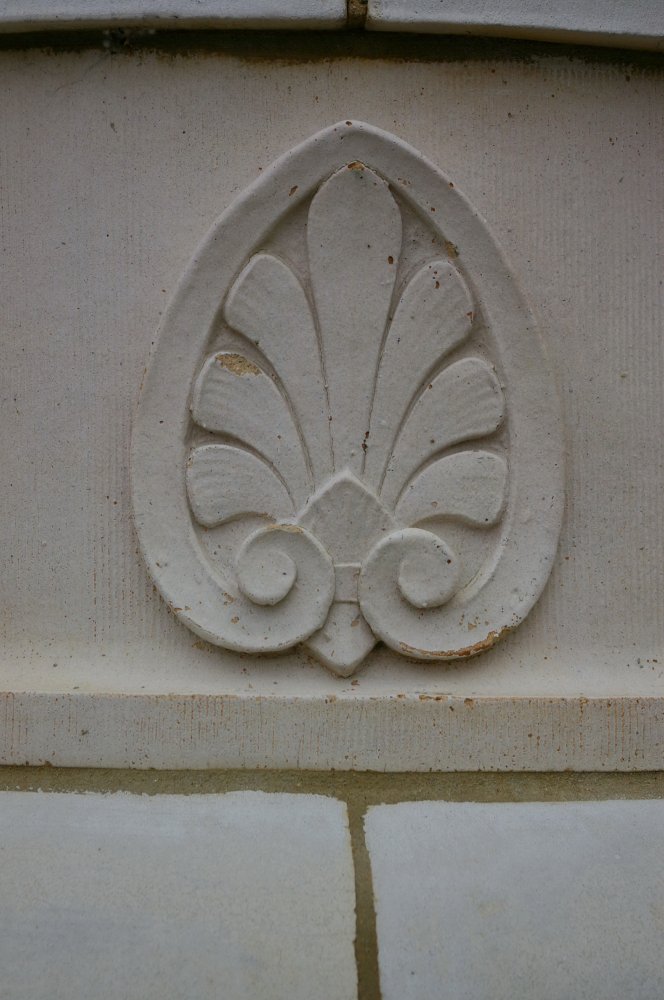 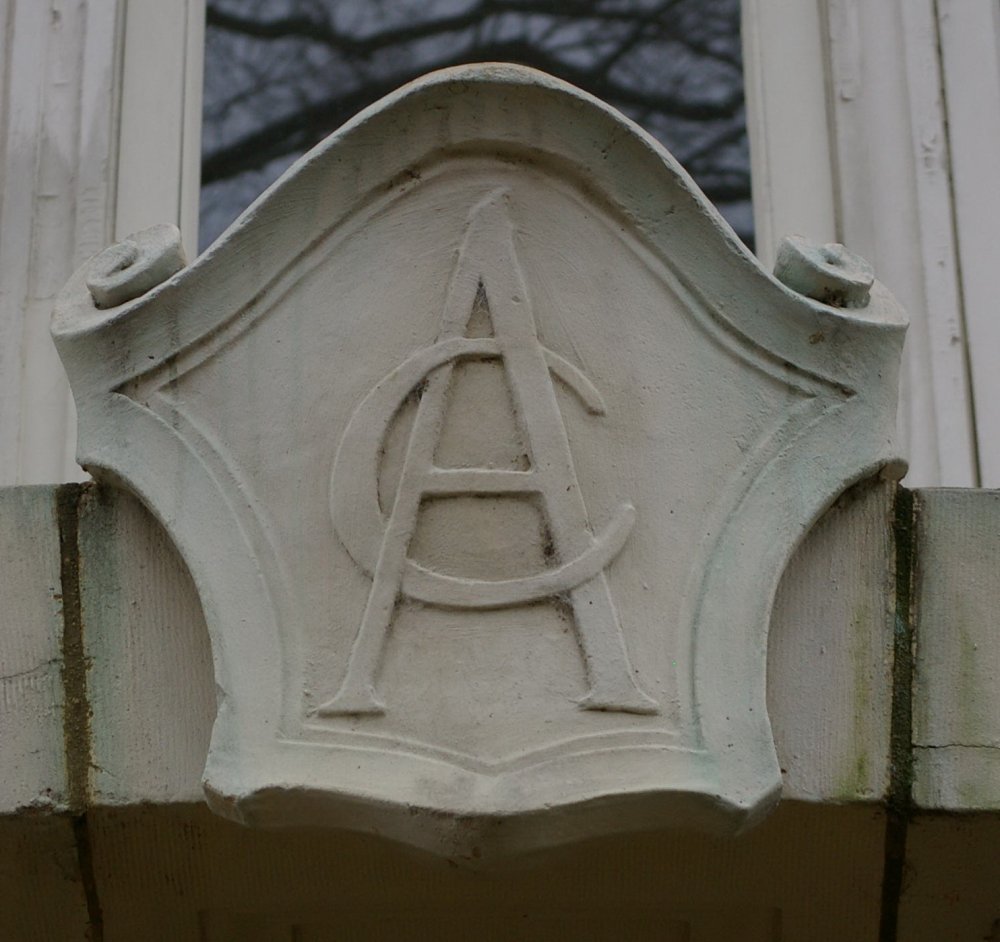 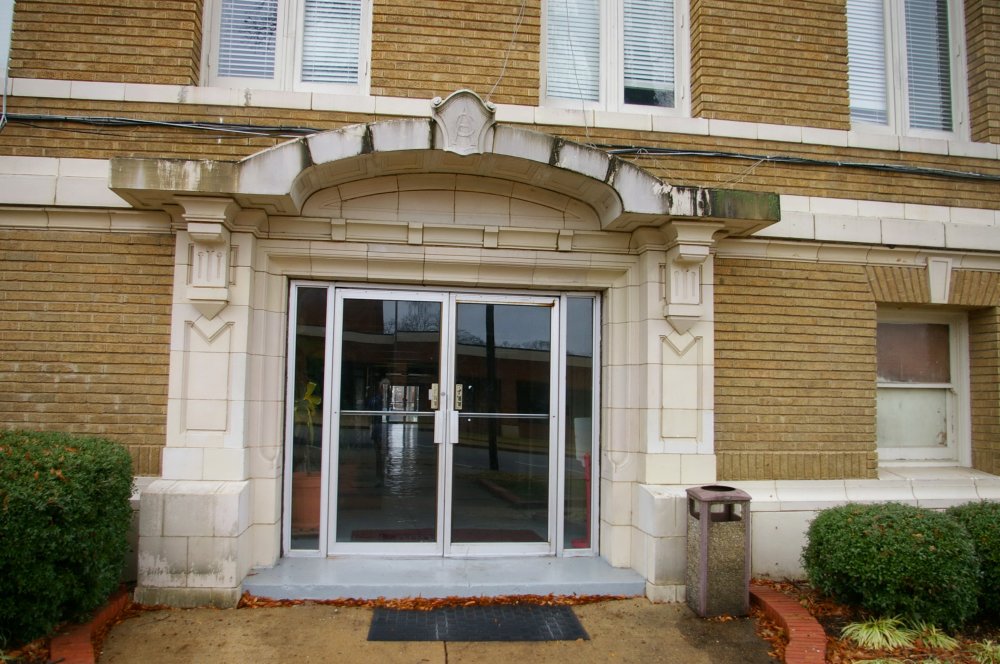 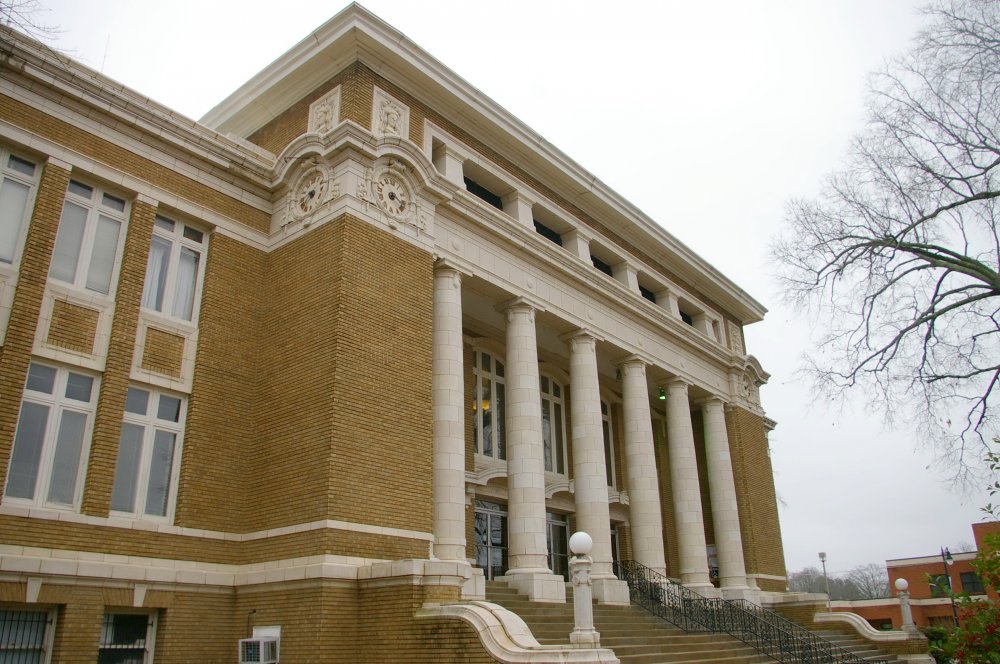