Pope County is named for General John Pope, who led explorations in the area. He was also commander of the United States Army’s Department of the Northwest, headquartered in Saint Paul. 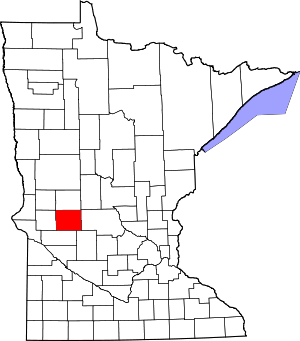 Description:  The building faces north and is a three story buff colored brick and stone structure. The building is located on landscaped grounds in the center of Glenwood. The building has a central pavilion that boasts engaged piers, decorated panels and heavy entablature. Upon the central frieze are carved the words: “Built to Perpetuate Civic Order and Justice”. The building is 62 feet by 146 feet. The light sand-coloured brick came from Ohio and the limestone trim is from Bedford, Indiana. The hallway wainscoting is Vermont marble. Metal grillwork in the stairway and protective ornament on the front doors were custom-designed. The courtroom is located on the second story. Walnut with black ebony inlay was used for courtroom furniture. The commissioners’ boardroom and various lobby benches were furnished and decorated with quarter-sawed oak, enhanced with ebony. An addition was constructed in 1985. The architect was Rieke Carroll Muller Associates Inc. The building was renovated in 2011. The architect was Klein McCarthy Architects of Minneapolis and the contractor was Contegrity Group Inc. of Little Falls. Description:  The building faces west and is a one story one room log cabin structure. The building is located on the landscaped grounds of the Pope County Museum to the west of the courthouse. The building was built in Stockdale and served as the first courthouse.