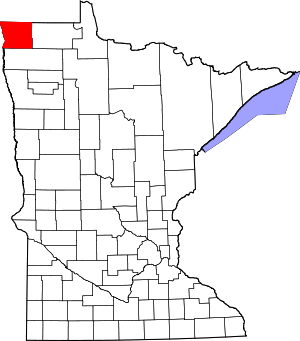 Description:  The building faces north and is a low horizontal two story buff colored brick and concrete structure. The building is located on a slight slope creating the two stories on landscaped grounds in the center of Hallock. Panels of brick stripe the building. Small double-hung windows are set into strips between the brick. The entrance is recessed and a flat slab roof tops the building. The courtroom is located at the east side of the second story. The building houses the County District Court of the 9th Judicial District.

History:  The county was created in 1878 and Hallock was selected as the county seat. The first court was held in 1881 in the Hotel Hallock. The first courthouse was a two story brick structure designed by J W Ross and built by August Wallensten in 1896 at a cost of $20,000. The building was torn down in 1965. The cost of construction of the present courthouse was $839,000.