Becker County is named for the lawyer George Loomis Becker, one of the three people elected to Congress in 1857. 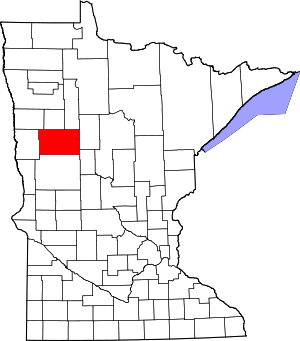 Description:  The building faces west and is a three story Bedford stone and concrete structure. The building is located in the center of Detroit Lakes. The walls are banded with black colored granite that frames the windows and main entrance. A two and a half ton black stone eagle perches on a ledge as a reminder of the federal presence and as a symbol of authority. The roof line is flat. An addition was constructed in 2005 to 2007 on the north side. The architect was Lightowler Johnson Associates Inc. and the contractor was Comstock Construction Inc.

History:  The county was created in 1858 and Detroit was selected as the county seat. The county used rented premises. The first courthouse was a brick structure built in 1885 by A A Whittemore with foundations built by T J Martin and Marcus Shaw. The second and present courthouse was constructed in 1941 to 1942 at a cost of approximately $250,000.