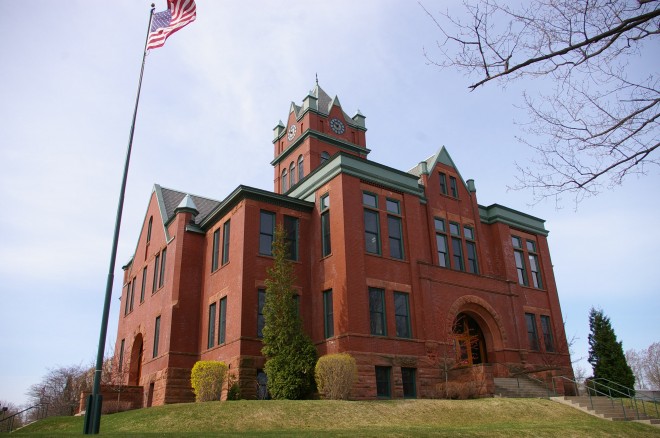 Description:  The building faces north and is a two story red colored sandstone  structure. The building has a large arch on the first story with recessed door. On the center of the roof rises a high square red colored brick clock tower. The superintendent during construction was Thomas Moulton.

Note:  Empire Stites of Kalkaska had been the lowest bidder, but he did not appear with the bond required by the bidding notice and therefore the second lowest bid, Mr. Gibson, with appropriate bond in hand, was accepted.  The total indicated by Gibson for construction was $28,749 which would allow the balance of the funds to be utilized for subsequent landscaping – a very pleasant surprise for the Supervisors and the general populace. Description:  The building faces east and is a three story concrete and glass structure. The east front has a central entrance. The second story has vertical dividers at the windows. The third story has horizontal windows. The roof line is flat. The building is named as the Governmental Center and houses the City of Traverse City and Grand Traverse offices. The building is located on the south side of the courthouse.