Saint Tammany Parish is named for Chief Tamanend, who was chief of the Lenni-Lenape nation in the Delaware Valley in Pennsylvania and who played a prominent role in the establishment of peaceful relations with the English settlers. 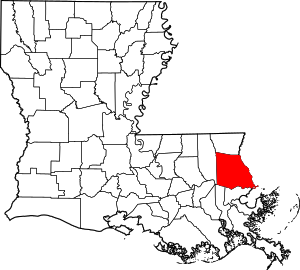 Description:  The building faces northeast and  is a three story buff colored brick and concrete structure. The building is located on landscaped in the center of Covington. The northeast front has a large recessed porch with two high columns with pediment above. Behind the pediment is a higher peak. There is a large arch on either side. The recessed entrance has a glass wall rising to the third story. The roof line is flat. The interior has a three story atrium with stair cases at either end. There are 12 courtrooms along the atrium on the upper stories. The building is named as the St. Tammany Parish Justice Center. Description:  The building faces north and is a two story white colored brick and wood frame structure. The building is located on the grounds of a restaurant in the center of Claiborne Hills. The courthouse is a white columned, two-story structure with verandas on the first and second stories. It is made of brick, which is covered with plaster on the inside.