Ouachita Parish is named for the Ouachita Native American people. 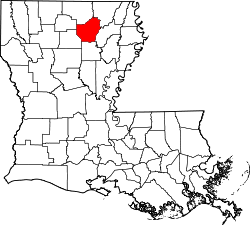 Description:  The building faces east and is a four story gray stone and concrete structure. The building is located on spacious landscaped grounds in the center of Monroe. The east front has three central arches at the entrance on the first story. Above are eight columns rising from the second story to the top of the third story. The roof is green colored. The courtrooms are located on the fourth story and the Police Jury Chamber is located on the second story.  The building was remodeled in 1956. The architect was H H Land and the contractor was W C Salley. The building was enlarged in 1967 to 1968. The architect was H H Land Architect Inc. and the contractor was Jessie F Heard & Sons Inc. Alterations were made on the fourth story in 2001. The architect was Herbert Land Architect Inc. and the contractor was Lincoln Builders Inc. On the south side of the building is the red colored brick Courthouse Annex.